Sweet dreams aren't made of this budget-priced shooter.

Psychologist Alice Drake has a special talent: She can enter the dreams of her patients and cure them of phobias by shooting the meanies that infest their brains. But Alice also possesses another amazing talent. While holding a minigun, she can contort her left arm into the most uncomfortable position without ever suffering from shoulder cramps. You'll get past the visual oddity of Alice's freaky arm in time, but Dreamkiller's other problems are less easily forgotten. This run-and-gun first-person shooter grows tiresome quickly and fails to make good use of the intriguing premise, which is a shame considering its virtually limitless potential. Some of the enemy and level designs display plenty of life and creativity and hint at the great shooter Dreamkiller might have been. Unfortunately, wonky game mechanics make this throwback twitch shooter more of an ancient relic than a welcome blast from the past.

What a great idea: As Alice, you jump into your patients' dreams and blast manifestations of their phobias. Is the patient arachnophobic? You take on hordes of spiders with your flame-spewing fingers and a helpful minigun. Does the subject have issues with machines? You clear his head of mechanical monstrosities by shutting the robotic infiltrators down for good. You may even learn about phobias you didn't know existed. Did you know that ponophobia is the fear of working too hard? Or that maniaphobes are afraid of going mad? Sadly, the potential for a cheesy-awesome story goes untapped. Levels are preceded by scantly written case descriptions, and while the still-image story scenes are beautifully drawn, they don't tell a tale worth hearing. The setup is simply an excuse to let you unload lead into crowds of weird demonic enemies a la Painkiller or Serious Sam.

The early levels are disappointing and conventional, featuring ho-hum level design, predictable enemy behavior, and all-too-familiar hyperactive shooting. And in many cases, the levels fail to capitalize on the phobia that inspired them. It makes sense that you would be shooting creepy-crawlies in an arachnophobe's nightmares, but why are there spiders in the dreams of the guy afraid of making decisions? Too many levels feature the same old corridors and arenas you've experienced countless times before, filled with enemies that are easily outwitted as long as you stay on the move. You clear the area, a door opens, and you move through it to the next area, where a bunch more meanies await. Thus, the more typical levels get tedious quickly and don't offer much in the way of challenge, so blandness sets in long before you've moved to the next nightmare.

The later levels still suffer from monotony, but they also display a lot more creativity. Some of the enemies and environments are wonderfully absurd. In the dreams of a teacher afraid of going insane, you take on masked freaks clad in straitjackets that spawn from rickety asylum cots. Another patient is frightened of children and toys. In that dreamworld, you take aim at giant tin soldiers, malformed toddlers, and giant bird figurines in a surreal playroom. Storm creatures soaring through the air, giant flaming trees, and obese medics are among the more inventive foes you face. But even when they look awesome, these monstrosities don't display any smarts, so any sense of challenge comes from sheer numbers and resilient bosses. Some of the boss characters--a hooded demon, a giant robot--are fun to take on. Others--a giant fire demon, a bee-spewing tree--are either overly frustrating or much too easy.

But whether you're fighting bland robots or mammoth medics, certain game mechanics just don't work all that well. The mouselook is super twitchy, so you'll probably want to adjust the sensitivity within the game menus. More problematic is the way weapon spawn nodes are handled. Like in many other fast-paced first-person shooters, you can pick up a weapon at a specified point--but here you can hold only one firearm at a time. (You can also shoot fire and webbing from your fingers.) But weapon pickup points are also weapon drop-off points. If you walk over an empty one, you will drop your gun and be left only with your all-but-useless fire spray. It's easy to do this accidentally in the middle of a firefight; you'll be strafing about quickly while firing at some enemy or another, only to inadvertently drop your weapon while being mobbed by demons because you passed over one of these nodes. It's a bad mechanic that has no place in a fast-paced shooter.

Dreamkiller makes a few attempts to be original, but they don't energize the action much. You can teleport forward, but plain-old shooting is effective enough that you rarely need to. There are also certain enemies that must be defeated by entering a portal that represents the patient's subconscious. This feature makes certain sequences a bit more challenging, but it adds little to the experience; in many cases, you can just move back and forth between portals shooting the vulnerable enemies on the way. If you become really desperate for a change of pace, you could check out the game's multiplayer options, but you'll probably never find anyone to play with. Deathmatch, Team Deathmatch, Capture the Flag, and Conquest modes are available on multiple maps, but if the game's all-but-empty leaderboards are any indication, Dreamkiller's online play is--and will likely remain--dead.

Dreamkiller is, through and through, a budget game. The visuals are colorful but look decidedly old, the action is as shallow as it gets in a modern shooter, and the sound effects lack oomph. The premise is neat, and some of the enemy designs are legitimately awesome. But if you've been dreaming of some old-fashioned twitch shooting, you should return to the old standbys and let this sleeping dog lie. 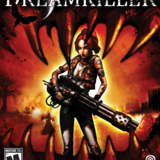