Unraveling the interwoven game mechanics of Dream Trigger 3D leads to the realization that this shoot-'em-up offers more style than substance.

A wire-frame dolphin swims through a pale green sea past translucent microorganisms. A swallow circles a fiery ball of light made up entirely of small glowing squares. A targeting reticle inspired by space combat games of yesteryear skims over a city of neon geometric shapes. The stages of Dream Trigger 3D offer a variety of visual delights, and each one is complemented by a layered audio track that changes in response to your actions. Your sweeps of the stylus reveal the enemies that hunt you on the top screen where you must vanquish them while dodging their attacks and grabbing power-ups. This unique pairing of mechanics is initially disorienting, but once you get the hang of it, you find that Dream Trigger 3D is a mildly challenging, mildly entertaining shoot-'em-up. It tickles your imagination but doesn't offer much depth, not unlike a pleasant reverie that fades in the light of the morning.

Like any good dream, Dream Trigger 3D is full of vivid visual stimuli. The standout elements are the backgrounds, which make great use of color and 3D. Though the field of play remains static, many backgrounds are dynamic and create the sensation of traveling through a forest or speeding down digital pipelines. The "ship" you control on the two dimensional surface of the top screen is rarely anything that actually resembles a spaceship. In addition to the objects mentioned above, you control a cube with a sphere inside of it, a nuclear power symbol, or a simple point of light. Your enemies vary too (as do their projectiles), and you face off against squids, tangles of purple wire, and a host of geometric oddities. There are times when your ship, your enemies, enemy projectiles, and power-ups cross the line from chaotic skirmish to confusing jumble, but these instances decrease as you become more familiar with the game mechanics.

There are two fundamental steps to conquering your foes in Dream Trigger 3D. The second is to kill them on the top screen by maneuvering your ship directly over them with the circle pad, D pad, or face buttons (for lefties) and pressing a shoulder button to fire. But to kill them, you first have to find them. Foes remain hidden on the top screen until you reveal them using the sonar grid on the touch screen. Your enemies are visible on this grid as purple squares moving through a field of gray squares. By touching a square, you queue it up to trigger a sonar ping that ripples out in a two-square radius. Any enemies caught in the radius of the ping are revealed and ripe for the blasting. The trick is that pings are only triggered by a rhythm bar that regularly sweeps the bottom screen. This means that you can't simply touch a purple square on the grid and reveal an enemy; rather, you must anticipate both the flight path of your enemy and the timing of the rhythm bar to place your ping effectively.

Dream Trigger 3D's sonar mechanic is initially disorienting. Your attention is divided between the bottom screen, where you are trying to place your pings in the proper places with good timing, and the top screen, where you are dodging projectiles, destroying enemies, and trying to grab power-ups. Further complicating things is the fact that you have a limited number of pings available at any given time. Yet, this restriction is mitigated by the fact that your pings (16 max on a 12x16 grid) replenish automatically with each sweep of the rhythm bar (approximately every 3 seconds; timing varies by stage). When you consider that each ping covers a two-square radius, you can actually get quite a bit of coverage by swiping the stylus in a quick line or dabbing a few different spots around the grid. This drastically lessens the amount of attention you need to pay to the bottom screen, allowing you to focus on the prettier and deadlier action on the top screen.

Avoiding enemy projectiles is one of your primary concerns up top, and the tougher levels can make the air thick with damaging bullets. You have four hit points that can be replenished by grabbing the intermittent health power-ups, but it doesn't take long to lose a life. As deadly as Dream Trigger 3D can get, though, there is another feature that makes it less menacing. Anytime you are attacking (there is only one attack), you are invincible. This allows you to move with impunity throughout the field of play, at least until your attack meter runs dry. You replenish this meter by revealing enemies on the sonar grid, and this correlation completes Dream Trigger 3D's intertwining web of gameplay mechanics.

Though it takes a while to wrap your head around it all, once you do, you find that the game is not as deep or complex as it initially seems. Your mind makes the connection between the sonar grid and the top screen, so you rarely have to look down. It's not very hard to stay in projectile-free areas until you are ready to strike or forced to evade, and then, triggering your attack ensures you can scoot around safely. Your attack meter becomes the only resource you really have to watch, but even it replenishes fairly regularly. You get into a rhythm of dodging, pinging, and attacking that provides the inherent satisfaction of vanquishing your foes and sweeping the board clean, but Dream Trigger 3D never manages to create much excitement or intensity.

There are 55 stages connected by a web in the World Map mode. You unlock them as you succeed, opening up new pathways that you navigate by spending dream points you earn at the end of each level. Eventually, you reach the point where you cease to unlock stages in the course of play and must attempt to complete challenges to proceed. Some challenges pose tricky tasks, while others simply reward repeated play, and it will likely be many hours before you've seen every stage. Once unlocked, stages can be played in Free Play mode (where, unlike in World Map mode, you don't have to navigate a web) or Time Attack mode (where your best times are saved), but the leaderboards for each stage only exist on your system, and there's no way to claim individual times with your initials. This all but prevents you from competing against anyone but yourself, unless you link up with another Dream Trigger 3D owner and play local multiplayer. Versus matches place two players on the same screen in a race to earn the most points. You can only see your opponent when you reveal them with a sonar ping, at which point you can attack them and stun them for a few seconds. Scrambling to vanquish the most enemies can be hectic, but without projectiles or power-ups, these matches feel flat.

Dream Trigger 3D also features a dynamic soundtrack that waxes and wanes depending on your activity level. When you are attacking vigorously, it delivers some nice blends of electronica and familiar classical strains, but when things are quieter, the audio is not as energetic. The minimalistic sections feel lifeless compared to their full-blown counterparts, though they do afford you the chance to play with the audible chimes of your sonar pings. Like making sonar ping music, Dream Trigger 3D is a novel experience. The eclectic mixture of game mechanics provides some entertainment, but ultimately, it fails to coalesce into something really substantial. It's neat to try to figure it all out, but once you see this stylish game for what it is, you'll wish there was more to it. 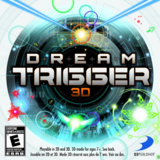 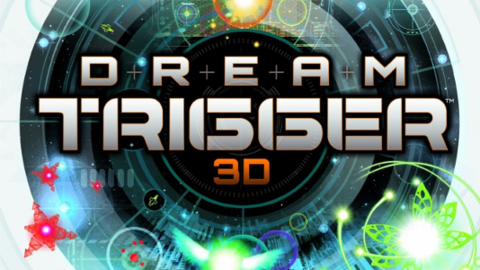 Dream Trigger 3D is a shooter for the 3DS in which you must reveal your enemies use the touch screen before shooting them on the 3D screen.