Drakengard 2 improves upon the original game, but it retains some of the same problems found in the original.

It sounds like a great idea: large-scale combat combined with fireball-spewing dragons. For the most part, it's as enjoyable as you might expect, especially if you're into dragons or hack-and-slash games. The first Drakengard had its share of problems, but the novelty of being able to summon a dragon and take to the skies during battle was enough to endear the game to those action fans who were willing to accept the awkward camera angles, repetitive gameplay, and truly bizarre story. While the second installment in this relatively new franchise does slightly improve upon its predecessor, it's still noticeably rough around the edges.

Drakengard 2 takes place 18 years after the events in the first game. The story follows the young Nowe as he goes about the task of single-handedly saving the world from utter annihilation. Nowe was raised by a dragon named Legna and was eventually discovered by a general of the Knights of the Seal, a powerful group of elite soldiers charged with the task of protecting the five magic seals that confine the red dragon and maintaining peace in the world. It isn't as simple as that, though, and Nowe soon discovers that the Knights of the Seal aren't as noble as they seem. So the idealistic (and rather whiny) hero forsakes the knights and sets out to discover the truth for himself. As you might expect, this dissention earns Nowe a lot of enemies, whom he'll reluctantly have to incinerate and hack to bits throughout a lengthy 30-hour campaign.

The game is divided into 12 chapters, each with several verses. These verses are basically missions, which vary slightly but usually involve moving from one point to another or eliminating all enemies within a given area. There are two distinct mission types: ground and air. The ground missions are your basic hack-and-slash-style missions where you run around and hit the square button over and over until there's nothing left to kill. For the air missions, you take control of the dragon and engage in dogfights with enemy balloons, floating blocks, and crude fighter planes.

The ground missions are by far the best part of the game. While on the ground, you control Nowe or one of three other playable characters as you slice your way through huge crowds of enemies. You can switch characters at any time by equipping a different weapon. Each character has a specific weapon type, and each weapon has different strengths and weaknesses. The axe, for example, is very slow but extremely powerful and great for dispatching large groups of armored enemies. Some characters are naturally better at dealing with certain foes. Nowe is weak against monsters, while the axe-wielding Urick can cut down giant ogres without breaking a sweat. These proficiencies will prompt you to change characters often, which is a nice way to break up combat, even though it all still comes down to mashing the square button repeatedly.

When on the ground, you have one main attack, which can be used to perform combos. There is an alternate attack that launches enemies up into the air, but the normal attack is faster and more effective, which negates the need for any alternates. Each weapon has a handful of unique combos, but it's just as easy and effective to simply use the standard attack combo over and over. Sometimes you'll need to avoid an attack by diving left or right or by blocking, which is much easier than in the original, since you now can move while keeping your guard up. Occasionally you'll find yourself outmatched, but this can usually be overcome with some generic magic attacks. The magic attacks clear the area around your character, and the strength of the magic is determined by how long you hold down the circle button to charge the attack. Again, the magic is unique to each weapon, so if you want to change your magic attack, you have to equip a different weapon.

If you're playing as Nowe and you get tired of swordplay, you can press the select button to summon Legna and take to the skies. As Legna, you can hold the L2 button to hover over the land and rain fireballs down on your enemies. This is a great way to take out large groups of enemies, but certain types of enemies are immune to Legna's attacks. Legna can only be summoned in outdoor areas, so you're on your own while you're in any of the game's many indoor areas.

Nearly every other mission requires you to take control of Legna for some air-to-air combat. These missions are dull at best and frustrating at worst. Some missions simply require you to fly from one area to another, which means that you can bypass all of the enemies you might encounter and just fly directly to your destination. Sometimes, though, you have to fight, which is unfortunate because the air combat often feels clumsy and stiff. Legna has three types of attacks: regular fireballs, homing fireballs, and breath attacks. The regular fireballs are powerful, but it's difficult to hit anything with them. The homing fireballs will fly toward whatever you lock on to, which is handy, but the attack power is so weak that these fireballs are only useful on the weakest of enemies. There are several different types of elemental breath attacks, which can be earned by killing enemies. You can shoot powerful explosive shots, homing lasers, homing water shots, and a superpowerful lightning blast, or you can activate a protective barrier that lets you ram enemies for major damage.

As varied as the breath attacks are, they aren't enough to make the air combat interesting. Legna controls sluggishly, and the draw distance is so short that you often can't hit enemies unless they're right in front of you. You can lock on to targets by pressing the triangle button, but it's a weak lock that vaguely orients you in the direction of your target, which isn't very useful. The flying missions also tend to feel tacked on, since they seem to be haphazardly stuck in between ground missions, with no preface or purpose. You'll shoot the same balloon or floating block countless times, which just isn't interesting.

Whether you're playing on the ground or in the air, you'll earn experience points and will eventually level up and get stronger. Each character levels up individually, but you have no control over the character's growth, so the only time you'll care about earning experience is when you're notified that you've gained a level. More importantly, each weapon levels up as you use it. There are well over 50 different weapons in the game, each with varying strength, attack range, and guard-breaking ability. The weapons can only be leveled up three times, though, which doesn't take long when you're scoring 400 to 500 kills per mission. Legna also levels up as he gains experience, and at certain points in the game, he evolves and is able to target more enemies simultaneously.

The visuals in Drakengard 2 haven't been updated since the first game, and as a result, this game looks dated. The textures and environments are bland and drab, and the enemies all look generic, so you'll see the same few foes reused constantly throughout the entire game. The frame rate tends to drop noticeably in larger battles, although, for the most part, the game does run smoothly. The most frustrating graphical flaw is the terrible camera angle, which requires constant adjustment while you're playing. The default camera position is useless and often zooms in too far or gets stuck behind walls. Also, the extremely short draw distance obscures your view of the action. When flying, enemies don't appear until you're right on top of them; while you're on the ground, it isn't much better. Luckily, you can use the radar or the helpful minimap to find enemies when you're tired of waiting for them to materialize from out of the haze. There are quite a few beautifully rendered cutscenes in the game, which offer a slight consolation for the rest of the underwhelming visual presentation.

The sound in Drakengard 2 is quite good. The voice acting is all capably delivered, although a couple of the voices do tend to get annoying, which is unfortunate, since they happen to be the voices you'll hear the most. The music is varied and interesting, and there are plenty of dissonant orchestral tunes that give the game a somewhat dark, weird tone, which is great. There is a vocal theme that is sappy, but it's used sparingly enough, so it doesn't get terribly annoying.

While Drakengard didn't do anything specifically new, it managed to offer an interesting blend of different action and role-playing elements, as well as a crazy storyline. Drakengard 2 sticks closely to that formula, although the story has been toned back a bit. Still, there are plenty of interesting plot twists and great evil characters to battle here. The game offers two difficulty levels, but the normal level is pretty easy. There are some fun and challenging boss battles, but some of the later missions get fairly lengthy, making them more a matter of endurance than skill. The problem is that when you die, you have to start the entire mission over again, since there are no checkpoints. This is extremely frustrating when you die right at the end of a 20-minute mission and have to repeat everything you just did. When you do finish the game, you'll unlock a mode that lets you start a new game with your characters and items from the previous save. There are three different endings to the game, and they change based on however many times you've played through the game. Add it all up, and Drakengard 2 is an appealing package, despite its flaws. 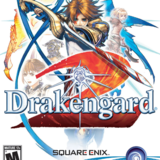