If you're looking for a solid action-adventure title to play now that you've beaten all the games you picked up during the holidays, Drakan: The Ancients' Gates may fit the bill nicely.

Drakan: The Ancients' Gates is the PlayStation 2 sequel to the PC action-adventure game that Psygnosis released several years ago. In it, you play as Rynn, a female warrior who shares a magical bond with an ancient dragon named Arokh. Dark forces have begun to gather in your realm, and the two of you must open four magical gates to bring Arokh's dragon brethren back into the world to drive out the evil.

The original Drakan was referred to by many as "Tomb Raider with a sword" because of its svelte female protagonist and the time it was released, but it had little in common with that series and is even less Tomb Raider-like now. As in the first game, you engage in hand-to-hand combat against foes on the ground when playing on foot as Rynn and in aerial combat against flying enemies when you're in the sky on Arokh's back. Besides being handy with a sword, you can also shoot arrows and cast spells. As you gain experience, you increase your skills in these three areas, which let you use special items (more powerful swords, bows, and spells, respectively). Throughout the course of the game, you gain enough experience to excel in one area and have basic proficiency in another--or you can balance your skills and end up fairly adequate in all three areas. The inventory system that you use to view your armor, weapons, and items is very similar to Diablo's in that larger items take up more physical space than smaller ones. Also as in Diablo, you must repair armor and weapons after extensive use, and you'll find that they aren't as strong as they were originally.

In Drakan: The Ancient's Gates, you travel to different lands and carry out a number of quests and side quests. The main quests are made up of feats you must accomplish to progress to the next land, like gathering up several rare artifacts for a wizard so that he can use them to break a powerful magical seal. You find each artifact in a different area--ashes of a warrior in a tomb, blood from a pagan altar in a goblin camp, and so on--all guarded by different kinds of monsters. These might sound like tedious "fetch quests," but the variety of creatures you face, environments in which you travel, and goals you must complete keep them entertaining. Besides the main quests, several side quests are available in each land, and there are additional enemy camps and dungeons that you can explore or ignore at your leisure. In most cases, there's usually a special item or treasure on hand to make it worth your while (though you should note that killing goblins is its own reward). For example, in one area, you find a cave--strewn with body parts and smeared with blood--in which resides a giant monster rooster guarding a golden egg. These extra areas and side quests add a lot to the game and make it well worth hopping on your dragon and exploring every nook and cranny in the world, rather than just heading off to finish the next main quest.

You can either engage enemies freely or lock onto to them by using a method similar to the Z-targeting from The Legend of Zelda: Ocarina of Time (or, in the sky, in Konami's Zone of Enders). You spend most of the game on or under the ground but also a fair amount up in the sky on Arokh's back. Aerial combat can be somewhat dull at first, but it ramps up considerably as you gain access to additional dragon breath attacks. Lightning breath, for instance, is great at a distance and so becomes an excellent foil against foes with up-close powerful attacks. The final breath attack shoots tendrils of black smoke at opponents, which drains energy from them and sends it to you in the form of white tendrils. This lets you replenish your strength while hurting your opponents if you're skillful enough to intercept the white tendrils while avoiding enemy attack.

The combat is divided between hand-to-hand and aerial fighting, and the boss battles too are split between your playing as Rynn or as Rynn on Arokh's back. You'll frequently win boss battles with Rynn alone by using special items like invisibility or invulnerablity potions or by finding a spot in the environment where the enemy can't reach you and then riddling it full of arrows instead of through skill. The same goes for many of the stronger basic opponents in the game; you'll often exploit flaws in the enemy AI (like hiding behind an object that your opponents seemingly can't walk around) to beat them. If developers had set up the hand-to-hand combat in a more balanced fashion, as in Treyarch's Draconus: Cult of the Wyrm (where a hit to your shield knocks it down, keeping you from "turtling"), it would've been more enjoyable. As it stands, it's still fun, even if it pushes you to resort to cheap tricks from time to time.

While you may figure out ways around enemy AI rather quickly, the control in Drakan: The Ancients' Gates takes a while to get used to. Some of the button configuration seems almost counterintuitive for the first 15 to 30 minutes of the game, but it soon becomes second nature. There remain, however, a few minor oddities, like the fact that you have to select items before you can call them up on the quick "hotkey" selection menu. This can cause problems at times when you're running from a monster because your health is low--and then you find a life potion and have to select it on the inventory screen (which doesn't pause the game--you still take damage from enemy attacks while you call it up) before you can use it to heal yourself.

Shortcomings aside, the graphics in Drakan: The Ancients' Gates are one of the best aspects of the game. Its environments are covered in excellent-looking textures, smoke and mist hang in the air in an exceptionally believable fashion, sunlight causes oceans and lakes to shimmer beautifully, and the skin between Arokh's wings is slightly translucent. The models for the human characters animate somewhat robotically, and pop-up is fairly noticeable throughout the game's outdoor environments, but it's more of a quick flicker from time to time, not a consistent trait, and thus it isn't especially bad.

Drakan's soundtrack is the kind of typical high fantasy fare that you won't notice beyond peripherally realizing that it's worked to set the mood of the game. The sound effects are similar; if you take the time to pay attention to them, you'll find that they're quite good. Hitting your sword against an iron gate will provide a suitably harsh clanging noise, while slashing at a door or crate will produce the solid "thunk" of steel on wood. As in Capcom's Resident Evil series, running on wood, stone, or carpeted floors each produces a suitably different sound. These may all seem to be effects that we've come to expect from games like these, but their quantity and consistent quality are very notable. While neither the game's soundtrack nor sound effects are overt, they're successful in doing the job of transporting you to a world where dragons, orcs, and goblins are commonplace. Adding to this are the conversations you'll have with the numerous human inhabitants of this land, who you find scattered about various towns, shops, caves, ships, and wilderness camps. You'll find that their lines are occasionally delivered somewhat dispassionately and don't compare to the excellent voice work in the recent similarly themed Baldur's Gate: Dark Alliance, but they're more than adequate and sometimes even carry a bit of wit and charm beyond simply advancing the game's story.

Drakan: The Ancients' Gates takes some time to get going, but unlike somewhat similar games, like Azurik: Rise of Perathia, it at least starts decently before getting good, rather than starting badly before getting decent. Even though it has its share of drawbacks (enemy AI weaknesses, occasional pop-up, and a lackluster ending), its positive aspects (variety of gameplay, numerous side quests, and nice graphics) outweigh the negatives.

If you're looking for a solid action-adventure title to play now that you've beaten all the games you picked up during the holidays, Drakan: The Ancients' Gates may fit the bill nicely. In spite of whatever flaws it has, it's an entertaining game--and one that's almost twice the length of many recent PlayStation 2 titles. 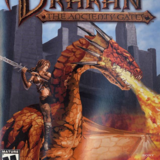