Dragon Quest V: Hand of the Heavenly Bride is an impressive remake of the Super Famicom classic that capitalizes on a highly addictive monster taming system and an enticing plot. Developer Arte Piazza has also integrated a fresh translation, a huge graphical overhaul that results in a beautiful dual-screen presentation, and a new museum for trading personalized knickknacks with friends. Though it took nearly two decades for Dragon Quest V to reach North American shores, its engrossing gameplay and great visuals make it worth the wait.

One of the game's most distinguishing features is its strong, absorbing plot, which spans multiple generations and casts you as a lonely boy. After suffering numerous tragedies, you begin your adult life attempting to reconcile your broken past with a grand destiny that's riddled with intriguing twists, family drama, and life-altering decisions that keep the story interesting. The storyline's personal nature makes progression more satisfying, as the plot is much fuller and goes beyond defeating the bad guys and other dull tasks typical of the genre. A new playable character (one of three you can choose to marry) with cutscenes tailored to her has also been added, giving another incentive to play through the game more than once.

An expansive world map is always displayed on the top screen and fills in areas as you progress, making exploration convenient. You also have instant access to a specialized map that gives you greater environmental details, as well as sketched town maps that mark all shop and save locations for expediency. These maps contain a full stock list that immediately lets you know if the current town holds any items of interest, so you're never forced to waste time browsing shops that can't help you. You'll spend the rest of your time in town engaging the locals in charming dialogue that should smoothly guide you to your next destination, and the included party chat--which was cut from the American localization of the Dragon Quest IV remake--should give you plenty of hints if you run into trouble.

As is standard in most role-playing games, battles are random and turn-based. Character information is outlined on the top screen, while enemies and lush 3D battlefields are confined to the bottom. You're given full tactical control of your party and can either issue commands individually or instruct all allies to heal, conserve magic, or attack at full strength. The latter option is a reliable method for handling AI guest characters or plowing through weaker enemies. Battles are rarely boring because of the remarkable enemy selection. Foes vary according to continent, region, and time of day, which enlivens exploration because you're often forced to adjust your battle strategy to suit different enemy types. Enemy attacks are also varied and look good, and they're more inventive than simple swipes since monsters have received new attack animations and rely heavily on special abilities. These maneuvers briefly appear 3D because of perfectly timed camera positioning and shaking, which produces an attractive effect that pairs well with aesthetically pleasing attack sounds and new 3D spell effects.

The game's most interesting element is its addictive monster taming system, which enables you to recruit more than 50 different monster types by defeating them in battle. All monster party members can wear equipment, cast a variety of spells, and level just like their human counterparts, though recruiting seems to occur almost randomly, which is frustrating when you're targeting specific creatures. But even with numerous creatures to tame there are still many you can't persuade to join you. When you've filled all of your eight party member slots, you're given the option to send any new recruits off to a monster daycare, where you can store more than 70 creatures, so you don't have to worry about running out of space for any new monsters you stumble upon.

The wagon, a fan favorite from previous Dragon Quest games, fortunately reappears and prevents monster training from becoming an aggravating chore. The wagon grants even those inactive party members experience points when you're on the field; this feature is important for monster management, because any monster you recruit begins at a vulnerable level. Storing all your low-level monsters in the wagon therefore scores them easy experience and protects them from overpowered foes. The wagon also enables you to switch between party members for more strategic play, which is convenient when your active members succumb to deadly status effects.

Like in the Dragon Quest IV remake, the detailed 3D environments in Dragon Quest V span both screens and radiate vibrant, cheerful color. You can rotate the camera to explore every section of the intricately designed towns, with minimal to no slowdown despite the energetic, colorful sprites that clutter the streets and bustle through castle corridors. Composer Koichi Sugiyama's score has also been slightly reworked, with fantastic, boisterous music enhancing the action during battles. Soft, euphonious town melodies and powerful trumpet solos accompany exploration, and though they aren't of the highest fidelity they still sound good given the DS's hardware limitations.

You'll spend at least 40 hours completing the primary quest line, though you'd likely double that amount experiencing everything the game has to offer. Item collectors will enjoy hunting for mini-medals--which are traded for special equipment--or spending hours building a formidable monster army, though stocking a private museum full of beautiful trinkets should prove to be the highest treat. Taking advantage of the multicard wireless support, you can even design your own items by exchanging your precious knickknacks with friends. If you ever feel the urge to take a relaxing break from saving the world, you can pass the time in several casinos, in a new stylus minigame, in a giant sugoroku board game, and even in a bonus dungeon.

Dragon Quest V: Hand of the Heavenly Bride's gorgeous presentation, cleverly designed plot, and fun monster taming system create an addictive, thrilling adventure. It's unfortunate that the original Super Famicom version of Dragon Quest V and the PlayStation 2 remake that followed 12 years later were never released in North America or Europe, but now that this great DS version has arrived, you really have no excuse not to experience this role-playing gem. 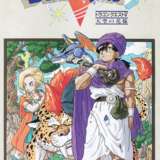 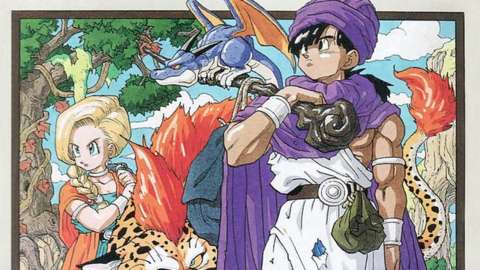