Dragon Quest Swords: The Masked Queen and the Tower of Mirrors Review

This disappointing, bare-bones spin-off has its moments, but not enough of them to make it worth playing.

Dragon Quest Swords seems like yet another attempt to appeal to the Wii's more mainstream audience, in this case by plastering the name of a well-regarded franchise onto a short, stripped-down game that can only be described as role-playing lite. Of course, there's nothing wrong with some airy entertainment, but in this case the Dragon Quest brand has been reduced to its barest form, without retaining the wit, style, or narrative depth you would expect. This is, from every angle, an inoffensive throwaway release that may draw young players into the DQ universe but will leave most fans unfulfilled.

Even the story keeps things on the simple side and boils down to a single question: "What's up with the queen?" It seems she's taken to wandering about unescorted and wearing a strange mask that--surprise--may be the source of her woes. As a self-named hero, it's up to you to find the queen, rescue her from the injurious clutches of the mask, and reveal the brute responsible. Prince Anlace, your father Claymore, and a French damsel called Fleurette join you in your quest, though their contributions to the tale are usually small bits of dialogue and some humorous asides. However, this doesn't mean you gain a full adventuring party; in any given dungeon, only one of your cohorts will be fighting at your side.

The game has the essence of an RPG, insofar as you will level up, purchase improved equipment, and gallivant around town prior to heading off to monster-filled dungeons. Each piece of this sugary pie is kept as elementary as possible, starting with the remote-only control scheme. From a first-person perspective, you roam using the D pad, and interact with characters and objects by targeting them with an onscreen reticle and pressing the A button. The developers were obviously gunning for simplicity by eschewing use of the Nunchuk attachment (nonsensically, there is no alternate control scheme that allows use of one), but the movement controls are clumsy. It's also hard to shake the feeling that you are wading through a pool of molasses, even if you run by holding the B button, though this is mostly mitigated by the tiny size of the one town you get to explore.

Once you are in the heat of action, you can use the Wii's distinguishing strengths with more prowess. You move through dungeons on rails en route to the end boss, though your travels are broken up by encounters with various enemies from the Dragon Quest universe, including all manners of slimes, drackies, and golems. Once battle begins, you swing the remote much as you would a real sword, crisscrossing the screen with dramatic slashes and slicing foes in two. There are three basic slashes available to you: vertical, horizontal, and diagonal. Enemies will often approach in formation or move around in various patterns, making it a snap to cleave through multiple enemies at once. Thrusting is also effective against certain enemies, such as rockbombs, which can be deflected back toward oncoming foes. You can also hit the A button to target a specific spot onscreen, which makes it easier to focus your attacks where they do the most damage.

Additionally, you can press B to pull up your shield and block enemy attacks. The location of many of these attacks are marked onscreen a few seconds in advance, which gives you time to move your shield to the right spot. And once you've dissected enough monsters, you'll fill a special-attack gauge, which then lets you unleash a devastating master stroke. These powerful moves require some remote wiggling of their own, though the moves are rather fun and require you to thrust the remote into the air or wave it in circles above your head before slashing. Even the standard action can be amusing, particularly when there are a number of monsters on the screen and you have to alternately block with your shield and attack with your sword. Nevertheless, the swordplay can become quite a chore. The idea behind it is sound, but in practice, the onscreen result of your slashes doesn't always seem to match the action you performed with the remote. This is particularly true with diagonal slashes and thrusts, both of which often register as simple horizontal or vertical slashes.

Your adventuring companion is there to help, though it's curious that while your allies are all named after swords, they don't use weapons in battle; rather, they just cast spells from the sidelines. You can assign a few different behaviors to your comrades, though whichever way you handle them will require some tweaking of the game's moronic artificial intelligence. The default mode, in which the AI casts spells "intelligently," doesn't live up to its in-game description of aptitude, and as such your companion will frequently waste spells, or cast an offensive spell when you are in dire need of healing. Conversely, you can set them up to cast spells without regard for their mana bar, but this is only a good idea if you are battling a boss. Alternately, you can do all the offensive work and set up the AI to only heal, which sometimes results in your companion doing nothing at all, even when you've taken a good deal of damage. Fortunately, you can also command your ally to cast a spell at any time--one of the game's few examples of required micromanagement.

Aside from the combat scheme, there is absolutely nothing noteworthy about Dragon Quest Swords, unless you count the manner in which every other aspect of gameplay has been thinned out to the point of absurdity. You can purchase new armor, swords, and sword upgrades, but there are remarkably few choices when you visit a vendor, and by the time you fully upgrade a single sword, the game is over. There are just a few master strokes to learn, your companions have a scant number of spells to cast, and customization is essentially nonexistent. Add these factors to the featherweight story, stripped-down party system, and eight-hour length, and you have a game that falls back to the lowest common denominator in almost every facet of its design.

The familiar Dragon Quest style is evident in the game's character models, which may not quite have the attitude and charm of DQVIII's characters, but still look good and fit nicely within the universe. As usual, the monsters are designed well and animate in a variety of amusing ways. On the other hand, environments are decidedly low-rent, displaying a lot of low-resolution textures and bare areas with very little of visual interest. A few set pieces look terrific, such as one in which you fend off mermen while riding a raft through river rapids, but the game doesn't apply this high standard consistently. The sound design has a few bright spots, but it too is unpredictable. It's nice to hear familiar music from the series, but the midi tunes could have stood for some enhancement. The sound effects are fine in battle, but others, such as the laughable 16-bit effect when climbing stairs, must be meant to evoke nostalgia but come across as merely cheap. The voice acting helps pick things up because most of it is rather good--just be prepared to wince from time to time at the sound of Fleurette's clichéd French accent.

The game holds a small bit of replay value by way of extra bosses and an unlockable payback mode, which grants you use of an impressive sword and lets you exact revenge on your enemies with its commanding power. But by and large, those extras aren't rewarding enough to inspire a return visit. This is the fast-food burger of RPGs: It looks and feels the part, but tastes decidedly mediocre. 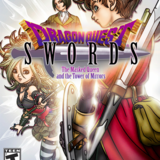 Dragon Quest Swords: The Masked Queen and the Tower of Mirrors
Follow