Dragon Quest Heroes: The World Tree's Woe and the Blight Below Review

Blighted by the night, vanquishing the plight by the children of the light.

No video game character conveys endearment and sadism in a single expression as well as the Blue Slimes. In Dragon Quest Heroes: The World’s Tree Woe and the Blight Below, these iconic teardrop-shaped blobs have never looked more adorable and homicidal, which is what makes killing them en masse one of this game’s greatest pleasures. It’s one of many delights aptly delivered by a collaboration that is one part Dynasty Warriors, one part Dragon Quest. As a hack-and-slasher with countless enemy encounters, character growth, and a shopping list of quests, it was joy to be reminded how much both series have in common.

As a contrast to all the dimension hopping that made up much of last year’s Hyrule Warriors (a Dynasty Warriors take on The Legend of Zelda universe), this Dragon Quest spin-off takes the reverse approach. Instead of protagonists jumping to various worlds in older Dragon Quest games, adventurers from those games come into the new world established in Dragon Quest Heroes.

Welcoming these otherworldly guests is a new foursome comprising of two co-protagonists whose default names are Aurora and Luceus, the boisterous King Doric, and an skilled inventor named Isla. I have always admired the mainline series for defying traditional fantasy RPG party formations and archetypes and this new team could easily carry a mainline Dragon Quest installment. That’s a bold statement especially when Aurora and Luceus are two sides of the same coin. Their complementary personalities are best showcased during the cutscenes where your see Luceus’ analytical side and Aurora’s impatience to jump into battle. Aside from a momentary interlude where you’re forced to use one of the guest adventurers, you can have a wholly enjoyable time relying solely on these new characters while ignoring the rest of the roster.

It’s a varied cast where each warrior easily proves their worth over the course of a single battle. The only thing better than seeing 3D models of characters like Dragon Quest IV’s Alena and Kiryl is hearing them speak for the first time. Just as it was momentous to have voice acting in a Final Fantasy game in 2001 with Final Fantasy X, so too was the introduction of dialogue in Dragon Quest VIII ten years ago. Hearing much of the cast speak in English accents in Journey of the Cursed King created a rare connection to the Tolkienian roots of JRPGs. Having Yungus’ cockney accent reprised in Dragon Quest Heroes--by the original voice actor no less--only makes this reunion all the more special.

This mingling of heroes from other worlds helps distract from the story’s laughably generic premise of light versus dark. Even the two co-leaders are named Children of the Light. The story starts off on an uncommonly cheerful note, even by Dragon Quest standards, where humans and monsters are happily co-existing. Due to a spell by a dark wizard named Velasco, the monsters are suddenly reminded that they’re supposed to hate humans. The ensuing chaos and unrest gives the game’s heroes more than enough to deal with, let alone reason to investigate why their non-human friends suddenly turned on them. It’s a good thing the story has its share of twists and guest character interactions to compensate for this otherwise plain narrative.

The bread and butter of the Dynasty Warriors franchise and many of its spin-offs has been the map-wide territorial tug-of-war where you and your armies race against the opposing military in conquering land one patch at a time. It essentially amounts to a game of which side can kill the other teams’ generals faster. If you’re ineffective with your time or get distracted my hordes of grunts, the resulting lack of shifting tides can make from some painfully prolonged battles. The great news is that there is much less of this in Dragon Quest Heroes. It’s not a tug-of-war so much as it is an exercise in permanently putting out fires, namely enemy spawn points called maws. Once you defeat a given maw’s Mawkeeper, that portal is gone, although most story missions will spawn multiple maws over the course of a battle. It’s a veritable rush to run from maw to maw while weaving past the opposition, leaving the minions to the rest of your team.

As a spin-off among a growing library of Warriors spin-offs, Dragon Quest Heroes sticks to the series’ hack-and-slash gameplay, which means that it benefits from a battle system that has taken 15 prolific years to mature. It’s come a long way from the outdated and stiff controls of Dynasty Warriors 2. From deft mid-air attacks to deadly four-hit combos, every hero’s repertoire is more than adequate. You might wish for the depth and exactness of Devil May Cry but when time is of the essence and a single sword swing can take out half a dozen skeletons, you don’t need precision. You certainly don’t need it when your blade can summon a screen-clearing tornado.

As much of a draw it is to reunite with characters from various mainline Dragon Quests over a single game, what truly sets Dragon Quest Heroes apart from other Warriors games is its Monster Minion feature. A given kill has the potential to drop a medal version of that respective monster. With the medal, you can summon that monster as an ally.

Aside from the palpable drama of turning the tide, these minions create two minigames. The first is knowing how to best take advantage of a given monster’s strengths. Given that they don’t follow you throughout the battlefield, summoning a monster the moment you get its medal isn’t necessarily the best move. Sometimes it's better to save them in anticipation of harder enemies at the latter half of a mission. The second game that is born out of the Monster Minions relates to the spawn points. The need for wise and strategic placement of monsters along a crowded path of enemies creates countless opportunities for--you guessed it--tower defense gameplay. These opportunities are brief, assuming you’re smart and efficient in focusing on maws yourself, but it’s nonetheless satisfying to have a squad of self-sufficient teammates, human or otherwise, who can limit the flow of Gargoyles, Goodybags, and Hackasauruses. Aside from some of the bosses, the entire bestiary is fair game. Your only limits are the monsters in a given map and the amount of medals you can carry at a given time. It’s a blessing to the rest of the opposing army that you can’t keep your newly recruited monsters for future battles. Using an army of Stone Golems mission after mission would surely nerf much of your playthrough.

In missions where you have to protect an object, it’s often the best strategy to leave a few friendly mid-boss type monsters on guard duty surrounding said object. You’d be surprised how gratifying it is check on them later on to find that they have everything under their control against equally large foes. And even if you have more pressing matters to attend to, no one would blame you for briefly jumping into this orgy of destruction, if only to see how many you can take down in a single coup de grace attack. It’s sheer bedlam when you can get these larger creatures to fill up your screen. Then it becomes a game of whether or not you can create slowdown or reduce the framerate by having too much going on at once. The action was never not fluid during my playthrough.

As with every Warriors game, there’s every opportunity to manage your heroes and enhance their skills in between missions. You start off in a standard issue basecamp, and by the time you’re used to your amenities, you’re upgraded to an airship. Both are as well-organized as any small town you can find in a JRPG: you have your church, alchemist, bar, and blacksmith. This is a Dragon Quest game, so naturally the weapons dealer is the burly gentleman sporting the horned helmet. Your base is also where you take on optional quests, which yields rewards like expanded inventory slots and Monster Medal capacity. It’s a good idea to periodically grind by coming back to older areas in the map; quests add more purpose and incentives to these non-story skirmishes. It’s diversions like these that provide a thoughtful connection to JRPG designs. Oftentimes, it feels like the only difference in Dragon Quest Heroes is the accelerated body count.

Seeing Akira Toriyama’s many creations in Dragon Quest Heroes never get old, even after defeating over a thousand Skeletons. The treasure traps known as Mimics have never looked so lively, right down to the perpetually dangling tongue. Same goes for the Great Sabrecats, whose expressive cartoony faces wouldn’t feel out of place in the Sunday comics section.

As much as I long for a new mainline Dragon Quest (not to mention the leisure time to play more JRPGs), Dragon Quest Heroes: The World’s Tree Woe and the Blight Below affords every lover of the franchise the rare opportunity to cause genocidal destruction with the kind of efficiency you cannot find in a turn-based RPG. To flank a monster is to also admire it from angles you seldom see up close in other Dragon Quests. These tens of thousands of encounters plus the appearances by the series’ many other heroes makes for an essential experience for any Dragon Quest fan, even if you haven’t played a hack-and-slasher in ages. These characters are so fully realized that, assuming you’re not a stickler for official canon, it wouldn’t be unreasonable to consider Dragon Quest Heroes as a companion piece alongside the main series.

View Comments (170)
Back To Top
8
Great
About GameSpot Reviews 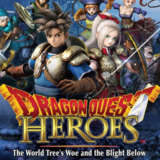 Dragon Quest Heroes: The World Tree's Woe and the Blight Below
Follow