Dragon Force 2 is almost a complete rehash of the first title, only now with a new story and a handful of new features.

A strategy/RPG unlike any other out there, the first Dragon Force game was an instant success with fans. Almost identical to its predecessor, Dragon Force 2 continues in the addictive tradition of the first game, only on a slightly smaller scale.

Five hundred years after Wein and friends defeated the evil that plagued the divided continent of Legendra, evil predictably prepares to reveal its blackened head once more. The land is becoming overrun with mysterious dark knights once again, alerting the game's eight new protagonists to the coming storm. Just as before, you select one of Legendra's eight rulers and gather support from the other seven to quash the evil upswelling.

Like its predecessor, Dragon Force is a "dramatic simulation," combining a strong, multifaceted RPG story with wartime strategy. You begin the game with a handful of leaders, each with his own personal army and a few strongholds. Divide and conquer is the name of the game, as you send out custom-built armies to fight the minions of darkness and "convince" the other kingdoms to join the cause, usually with sheer military force. Each individual leader can command up to 100 troops, making for some truly impressive battles. The most significant addition to Dragon Force 2 is the ability to have two different unit types under one leader's command, opening up a variety of new combination attack strategies that weren't present in the first game. For the uninitiated, you can give a number of orders to the teams and leaders. Each unit has four basic instructions: advance, retreat, melee, and wait. Other units, such as archers, have specific commands that allow them to better express their particular strategic advantage. In addition to more commands, Dragon Force 2 has seven more unit types than the first game, each with its own strengths and weaknesses. Like before, the leaders themselves will remain motionless until a duel is called for or they are instructed to magically lash out against the ensuing horde. Dragon Force 2 boasts more spells than its predecessor, expanding each leader's limit from three to five. Like the first game, spells can be offensive and defensive, attacking or protecting the armies or the leaders themselves. Between battles, you will be called to HQ to promote your leaders, upgrade your fortresses, and convince prisoners of war to join your cause. These scenes are where a majority of the story development takes place, nicely illustrated with anime stills and movies. Dragon Force 2 is an enormous game, likely to offer over 60 hours of gameplay per campaign to experienced players. With eight separate campaigns, you are also given a lot in the way of replayability.

Dragon Force 2 is an easier import than it would first appear but is only recommended for those with Japanese knowledge. All of the game's menus use fairly basic kanji. For those unable to read Japanese, most of the menus mimic the first game's menus exactly, providing a road map for series veterans. In HQ, each menu item has a small animated icon next to it showing what it is - also of great help. In any case, Dragon Force 2 is recommended only for those who have played the first game.

Unlike the general gameplay, Dragon Force 2's presentation is worse off than its predecessor's. Sporting the bland, more washed-out palette of newer-generation Saturn games, Dragon Force 2 lacks the colorful punch of the first game. Where bright yellows and greens once colored the countryside only drab browns and brown-greens remain. The map itself is more detailed and less flat-looking, but the constant flow of people is missing this time around. While it only makes sense that you can't see every unit secretly moving in the distance, much of Legendra's hustle and bustle is gone, somewhat taking away from the game's air of excitement and urgency. Due to the addition of more unit types per battle and RAM constraints, the game's spell effects have also taken a large step backwards. Anime cutscenes and stills abound, impressively showing off Sega's art budget, but more graphical effort should have been placed in the battles, as they occupy a majority of the game's playtime. The game's music is competent enough, but lacks the epic feel of the first game's music. However, Dragon Force 2 is rife with spoken dialogue, something missing entirely from the first game. While this won't matter much to the average US gamer, it sets the mood nicely for the enthusiast.

In case it hasn't been said enough times already, Dragon Force 2 is almost a complete rehash of the first title, only now with a new story and a handful of new features. This adversely affects the game's addictive nature only slightly, making it a worthwhile import for savvy fans of the first game. With Working Designs out of Sega's picture and Sega focusing on the Katana, importing is one's only hope of seeing this game. 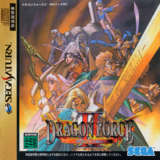 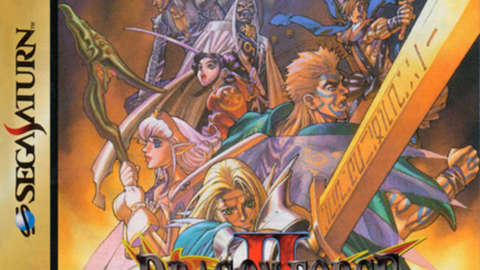 Dragon Force 2 is almost a complete rehash of the first title, only now with a new story and a handful of new features.