Team battles aren't enough to make this latest entry in the Budokai Tenkaichi series stand out from the crowd.

You know what they say: Another year, another new fighting game set in the Dragon Ball Z universe. Unfortunately, there's very little about Dragon Ball Z: Tenkaichi Tag Team that's actually new. The introduction of team battles may appeal to those who can round up some friends to play with, but it isn't enough to keep this familiar fighting system from feeling stale, and the story mode recycles the same tired material that's been used for game after game in the series. Avid Dragon Ball Z fans who are eager to take Goku, Vegeta, and the rest of the gang on the go may appreciate the fact that this is the first entry in the Budokai Tenkaichi series to come to the PSP, but most others won't find much to get excited about here.

As in prior Budokai Tenkaichi games, Tenkaichi Tag Team's battles give you a behind-the-back perspective on your fighter and let you dash and soar in all directions around a three-dimensional arena, which is liberating. An automatic lock-on feature makes navigation easy; you press up or down on the thumbstick to fly straight toward or away from your currently targeted enemy, and you can circle around him or her by pressing left or right. Flying up or down independent of your target's position is done with the D pad. The warriors of Dragon Ball Z routinely hit their opponents with enough force to send them soaring back hundreds of feet, and wielding that kind of power is intoxicating for a little while. But the shallowness and repetition of the combat soon becomes clear, and the initial excitement wears off quickly.

At first glance, you might think there's a good amount of depth to the fighting system. The training section you can access from the main menu has dozens of entries about full-power smashes, vanishing attacks, ultimate supers, chain burst mode, and all sorts of other things. Unfortunately, all you get in this section are little blurbs of text about each item. Without the opportunity to see these things in action to get some context for what they mean, it's difficult to make sense of statements like, "When you receive a Rush immediately after entering a Discernment stance, you will automatically counter with a Snap Instant Transport Attack and a Body Strike thereafter." A hands-on tutorial mode that guided you through these actions step-by-step would have made it all seem a lot less mystifying.

But once you decide to jump into battle, it quickly becomes apparent that you don't actually need to spend much time worrying about snap instant transport attacks, anyway. You can perform close-up melee attacks or fire off long-distance ki blasts, reflect your opponents' offensives with a well-timed tap of the block button, and dash around the environment in the blink of an eye. Holding the L button charges up your ki, and flashy and devastating super attacks like Goku's kamehameha and Vegeta's galick gun, which consume ki, are all done with simple button inputs. This accessibility makes it easy for anyone to jump into battle as his or her favorite Dragon Ball Z characters and immediately start dishing out heaps of punishment. (AI-controlled opponents do their part by putting up little resistance and giving you plenty of opportunities to hit them with everything you've got.) But it also means that one battle feels very much like another, and the action quickly loses its appeal. Because there's little difference in how the characters handle, the 70-character roster also doesn't lend the game much variety or replay value.

The big new feature in this outing is the introduction of team battles. In addition to one-on-one matches, characters can team up for two-on-one or two-on-two fights. Having two opponents to deal with flying around at once makes the action a bit more exciting, and when playing with up to three friends using the ad hoc multiplayer option, the ability to coordinate with a teammate to defeat your opponents more effectively gives the battles a bit of a tactical feel. For instance, super attacks are made more powerful if both team members hit the same opponent with super attacks simultaneously. It's just too bad that this new feature isn't given a real chance to shine with a fresh new fighting system; instead, it is tacked on to the same well-worn combat model that Tenkaichi fans know all too well.

The primary single-player mode is called Dragon Walker. In this story mode, you view a map from an overhead perspective and fly a cute little representation of your current character from place to place to complete missions, which typically involve clicking through some text and then winning a fight or two. The storytelling is tepid and treads the same familiar territory that Dragon Ball games have covered time and time again. It's hard to imagine even the most fanatical of Dragon Ball fans getting excited at the prospect of once again fighting their way through the Saiyan Saga, the Frieza Saga, the Majin Buu Saga, and the rest, particularly given the lackluster way in which they're presented here. In addition to the Dragon Walker mode, whether playing solo or multiplayer, you can jump into free battles using any characters you've unlocked. And either alone or with a friend, you can try a survival mode, which sends one enemy team after another at you, or fight predetermined teams in a mode called Battle 100. Points earned across these modes can be spent in a shop on items you can equip to increase a character's attack or defense, reduce the ki cost of certain actions, and impart other bonuses.

The cel-shaded characters are colorful, detailed, and animate very smoothly, and super attacks frequently fill the screen with massive beams of energy, keeping the visuals exciting even after the gameplay has grown tired. But the environments are distinctly less detailed than the fighters who inhabit them, creating a strange disconnect between the characters and their surroundings. And the camera often can't keep up with the action, leaving you momentarily with no sense of where your enemies are or what impending danger might be heading your way. The voice acting has the goofy, exaggerated quality you'd expect to hear from spiky-haired characters having heated exchanges about power levels and dominating the universe. But the sounds of battle quickly become grating, thanks particularly to a high-pitched whistling noise you hear whenever a character gets sent hurtling backward through the air, which happens all the time.

Dragon Ball Z: Tenkaichi Tag Team is just another DBZ fighting game, and makes little effort to distinguish itself from its predecessors. Team-based multiplayer combat is a good addition, but it's tacked on to the same old combat model the series has dished out time and time again, and there are many far better multiplayer fighting games on the PSP. Tenkaichi Tag Team hints at depth and variety but actually fails to offer much of either, and although it's fun to wield the tremendous power of these characters for a short while, the repetitive and familiar nature of the combat makes this a game for only the most devoted Dragon Ball fans. 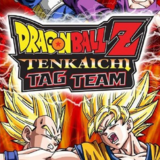 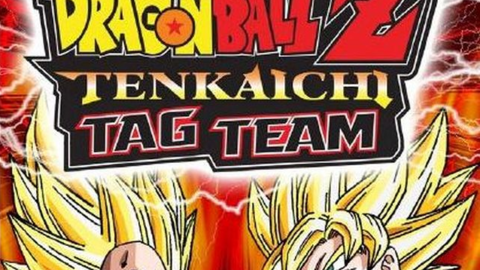 For the first time ever Dragon Ball Z fans can enter into high-impact two vs. two combat in Dragon Ball Z: Tenkaichi Tag Team for the PSP system.