DBZ: Supersonic Warriors accurately captures the look and feel of the TV show, but the big surprise is that it's also fun to play.

Even though Dragon Ball Z: Supersonic Warriors is the second DBZ-inspired fighting game to land on the GBA, it's extremely important to bear in mind that it isn't in any way, shape, or form a follow-up to Dragon Ball Z: Taiketsu--a terrible game that is honestly better left forgotten than discussed in polite company. DBZ: Supersonic Warriors is actually quite a good 2D tournament fighting game that successfully copies the look and feel of the battles from the cartoon show. Anyone looking for the next Street Fighter probably ought to look elsewhere, but Dragon Ball fans (even casual watchers) will be more than delighted.

The character lineup includes 13 playable fighters. Most are obvious choices, like Goku, Gohan, Frieza, and Trunks, but there are a few surprises too, such as Dr. Gero, Majin Buu, and Gotenks. Roughly half of the characters are available in their super and Saiyan forms as well. There are six modes in all. The story, z-battle, and challenge modes pit you against a set number of characters (or teams), and the free battle, training, and link versus modes are set up exactly as you'd expect them to be. The artificial intelligence puts up a decent fight in the single-player modes, and the link versus mode adds a bit more replay value by letting you take on human opponents via a GBA link cable. Every time you win a match in the story, z-battle, or challenge modes, you earn some points. These points can be spent later on in the options menu to unlock bonus features, such as those extra character forms and additional story mode scenarios.

The combat system involves some button mashing, but it's handled in a controlled way. The A and B buttons are used to perform strong and weak attacks. They're also used for blocking. There's a short window of opportunity to block right after an attack is made. Otherwise, pushing one of the buttons will make your character perform an attack. While that kind of setup may sound strange at first, it actually keeps players on their toes and cuts down on turtling (constant blocking). Each character has different attacks depending on whether the character is on the ground, in midair, next to, or directly above or below an opponent. That's right--you're not limited to fighting on the ground. Unlike in traditional 2D beat-'em-ups, tapping up lets the DBZ fighters hover in midair. Using the directional pad, you can pretty much fly anywhere you want. Attacks can also be chained together into combinations, and throws can be performed as well.

Fights in the story mode are usually one-on-one, but the other modes let you put together a team of up to three different characters. The team aspect works much like it does in Capcom's tag-fighting games. The number of characters you get to pick is based on the combined strength rating of the characters. The limit is four. So, if you choose a character with a strength rating of three, the other character has to be rated a one. If you pick a character with a strength rating of two, you can choose another two or fill out the team with a pair of ones. When you're playing a team-based mode, you can switch characters on the fly by tapping the L button. This lets you take out a character that's low on stamina, but it also lets you avoid certain attacks thanks to the moment of time that elapses between when one character disappears and when the other appears. Swiping ideas from Capcom is rarely a bad idea--the team setup works great.

Since this is a DBZ-inspired fighting game, you know that ki and momentum are going to come into play somehow. In the show, the fighters need to build ki in order to perform special attacks. They typically do this by staying in one spot, grimacing at their opponent, and grunting for a long time. It's pretty much the same in the game. By holding the L button, you can build a character's ki. At certain percentage levels, you can tap the A and B buttons to perform a variety of projectile, combination, and finishing moves. Momentum is represented by a gauge at the top of the screen. The indicator starts out in the middle, but it moves off to the side as a character lands combinations or forces his opponent to block multiple times. When the indicator reaches the edge, the character being pummeled is stunned. That allows the character with the upper hand to land an extra combination, perform a ki attack, or even execute a heavy attack that can knock the stunned character completely off the screen and into a mountain or building in the background. Between the ki attacks, the momentum gauge, and being able to kick an opponent off the screen, DBZ: Supersonic Warriors does an excellent job of capturing the aggressive nature of the TV show.

It's impressive how much the game looks and sounds like the TV show, especially considering how badly other games have missed the mark in the past. The 2D character sprites are large and nicely animated, and they look exactly like the characters from the cartoon. They use the same kicks, punches, and projectile attacks too--attacks like the big bang attack, the cosmic crusher, and the kamehameha are just as spectacular in the game as they are on the show. The backdrops are colorful and vaguely reminiscent of familiar Dragon Ball Z locations, but there isn't much in the way of fine detail, and there isn't that much going on in them either. Most likely, this is a consequence of the zoom effect that's used to scale down the characters and scenery whenever two fighters move away from one another. Fans of Akira Toriyama's original artwork will be pleased to know that many of the character portraits and cinematic scenes were lifted directly from the show's animation cells. Like in the previous game, the music and sound effects are woefully generic. This time out, however, there are voice effects accompanying many of the heavy and super attacks in the game--taken from recordings of the actual English voice actors. 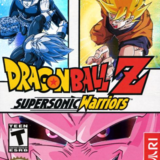