Dragon Ball Z for Kinect's repetitive battles and flaky motion controls sap all the fun out of being a Saiyan.

Seeing a plump, ki-filled Kamehameha blast into the face of an evil villain with just a flick of the wrist is a sight etched deeply into the minds of Dragon Ball Z fans. As too are the show's epic airborne battles, earth-shattering explosions, and flame-haired Super Saiyans who perpetually save the universe from certain doom. And while our childhood fantasies of flying through the air and having power levels over 9,000 might not have come to pass, Dragon Ball Z for Kinect has a fair crack at making them happen without any risk of physical harm, or potential YouTube embarrassment. Sadly, Dragon Ball Z for Kinect's erratic motion controls and teeth-grindingly repetitive battles make playing as a Saiyan more of a chore than a dream come true.

A lot of that's also because of the game's rigid structure, which limits your movements and places an emphasis on performing quick-time events during highly choreographed battles from the series. Everything from Raditz's arrival on Earth in the Saiyan Saga through to Majin Buu's emergence in the Babidi Saga is represented, with select scenes from each forming the basis of the game's story mode. Each scene places you at the beginning of a battle where, after a brief but true-to-the-anime cutscene, you're placed in the shoes of one of the famous fighters to do battle against a dastardly villain.

Battles are split into different sections, one that places you in a first-person view where you can perform a range of moves, and another that's little more than a cutscene filled with numerous quick-time events. The first-person sections are where you're given the most freedom, but they still follow a rigid formula that differs little from one fight to the next. You must defeat an enemy by unleashing a range of kicks and punches, which are triggered by kicking and punching in front of you. Land enough hits, and a power bar at the bottom of the screen fills up, after which you have to punch as fast as you can to fill more power bars to perform automated combos that see enemies thrown across the landscape in a manic display of punches and energy blasts.

It's hard, sweaty, and frustratingly repetitive work. The punching process is repeated several times until you've worn down enough of your opponent's energy to trigger another section, where you launch ki energy blasts by thrusting your palms out in front of you; after that you're back to punching. Your opponents don't just sit there and take it, but neither do they put up much of a fight. Their attacks are slow and stumbling, and they hardly conjure up the threatening vibe that all-powerful villains should. Presumably their sluggishness is to give you enough time to react and trigger a defensive move such as dodging by leaning to the left or right, or blocking by holding your arms up in front of your face. But most of the time you can ignore defence completely, and, if you've got the stamina, just punch the air nonstop to win.

Special moves let you win with even more ease, if you can get the game to recognise the stance that triggers them. Charging your ki energy bar launches special moves, such as Goku's Kamehameha or Krillin's Destructo Disk. The stance to do so varies between characters, but a handy icon to the right of the screen lets you know how to stand, which often involves holding your hands by your side or above you. Frustratingly, getting the game to recognise the stance is completely hit-and-miss. Sometimes it works just fine, while other times it requires all manner of weird bodily contortions to be performed. Once you're charged up, a more reliably recognised stance launches the special attack and devastates your opponent's health for an all-too-easy victory.

Interspersed between the first-person sections are numerous cutscenes filled with quick-time events. Often they play out memorable moments from the anime, such as Goku's battle against the giant Oozaru Vegeta, or his battle against the mean-spirited Frieza on planet Namek. Getting through them is simply a case of watching and waiting for the appropriate icon to appear onscreen, which tells you what action to perform. They're largely easy actions, such as running on the spot, leaning backwards or forwards, or holding your arms up to block. A few more-complex moves are thrown in too, but more often than not the game fails to recognise them, which is immensely frustrating if you're on the verge of death.

The whole thing is just a bit half-baked, with neither the motion sensing being as responsive as it should be nor the story mode being anything other than an overly simplistic, disjointed collection of battles from the series. You just don't feel like you're working towards anything of worth, and once the fun novelty of throwing a Kamehameha wears off, there's little else to keep you going. There's no multiplayer at all and no online leaderboards for you to show off any high scores, and the only other mode simply replicates the battles of story mode, albeit minus the cutscenes and with the character of your choice. A card reader lets you obtain more characters via QR codes, but given that there's little difference between how the characters play, it's largely worthless.

At the very least, you're treated to a game that looks the part. Cel-shaded characters and environments capture the look of the anime nicely, even if the facial animations are a bit robotic. The voice acting's good too, despite the cast lacking many of the original actors from the series. And fans will no doubt appreciate the exclusive episode of the Dragon Ball anime included with the game, which is nicely presented in HD. But that's hardly enough to make up for the sheer mind-numbing repetitiveness of the game. If you're really desperate to live out those childhood (adult?) dreams of being a Saiyan, then there are a few cheap thrills to be had here--just don't expect to be playing Dragon Ball Z for Kinect again once the novelty has worn off. 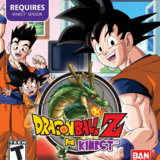