Raging Blast captures the look of Dragon Ball but leaves out much of the excitement.

Dragon Ball: Raging Blast is the latest in a long, long series of games that try to take the superpowered fighting action of the popular anime series and adapt it into a compelling fighting game. The results here prove to be mixed. The visuals ably reproduce the lightning-quick speed and tremendous power that make the battles in Dragon Ball exciting. However, the fighting system lacks the depth and nuance to actually capture that excitement, making Raging Blast a game that Dragon Ball fans may enjoy for its breadth of content but one that has little to offer the uninitiated.

The fights in Raging Blast take place in huge environments throughout which characters can dash and soar in any direction. Movement is handled simply, with the left stick hovering you forward, backward, and to the sides, while the shoulder buttons are used to fly up or down. The camera is situated behind your character and generally manages to keep both you and your opponent on screen, except in situations when you are on different vertical planes. In moments like this, you're given a great view of your fighter's head or feet while your opponent is nowhere to be found. It's easy enough to locate your opponent again--the tap of a button will make you immediately rocket toward your rival--but it happens frequently enough to be a nuisance. And while at first glance the environments look as if they go on forever, this illusion is shattered the first time you find yourself impeded by one of the invisible walls that surround them.

The actual fighting offers a fair amount of complexity but very little depth. There's a comprehensive training mode in which Goku familiarizes Gohan with all of the techniques, and it takes some time to progress through it all. You'll practice dash attacks, charge attacks, smash attacks, and numerous other attacks, as well as defense maneuvers. It's quite a bit to take in, though unlike many fighting games, there are no tricky inputs to memorize for any attacks here. Some actions require a precisely timed button press to pull off, but at most, you'll need to push a thumbstick in one direction and tap a button to perform even the most powerful of attacks.

This focus on easily performed, extremely powerful attacks helps make the battles feel tremendous, with characters constantly being sent flying backward through the air with such force that any mountains or buildings in their way get obliterated. But it also prevents the core action from being very involving. Performing these devastating attacks that are the staple of every warrior's arsenal requires "ki," which you build up by landing relatively weak punches and kicks. There's no nuance to these standard attacks; they're all performed with just one button, which you can tap to unleash combos or hold down to charge up a more powerful attack that will send your opponent soaring. But these attacks do so little damage to your opponent that they're not very useful. The only reason to use these weak attacks is to build up your ki, which makes the majority of fights feel overly simplistic and downright predictable. Ki can also be accumulated by holding down on the D pad, leaving you temporarily vulnerable to attack, but this comes with its own set of problems. For a game whose focus should be intense fighting, Raging Blast requires you to spend too much time slowly building your ki power, drawing attention away from the more interesting aspects of combat.

Raging Blast has a wide variety of modes, the most interesting of which is Dragon Battle Collection. Here, you play through many story arcs from the series, such as the Saiyan Saga, the Frieza Saga, and the Androids Saga, as well as a number of what-if scenarios. Those familiar with the lore will likely enjoy reliving some of their favorite moments here, but the unfamiliar will find the storytelling so poor that they'll have a hard time making sense of what's happening, much less finding it interesting. There is some incentive to playing through these sagas because you'll unlock characters, special moves, and items that you can equip to improve a fighter's attack power, defense, health or some other characteristic. The grand total of more than 70 characters seems impressive at first, but that fades fast as you realize that they all feel pretty much the same in action.

In addition to the stories, Raging Blast has a standard assortment of fighting game modes, such as Arcade, Survival, Time Attack, and a Tournament option that allow up to 16 players to fight it out for supremacy. Unfortunately, competing against friends on the same console is tough to enjoy because the screen is split down the middle, which severely limits your view of the action. Online combat is a better option, but it's plagued by a significant percentage of competitors who won't hesitate to disconnect if things aren't going their way.

The visuals capture the look of Dragon Ball with striking success. The characters look as if they've stepped right out of the anime, with the smoothness and speed of the action found in the series faithfully reproduced here. The music is upbeat and catchy but much too repetitive. And while the voice actors bring the same steadfast enthusiasm that's apparent in the anime, you'll quickly grow tired of hearing the same few taunts.

The huge assortment of characters, stories, costumes, and other aspects of Dragon Ball lore cannot hide how shallow and uninspired the fighting mechanics are. There is no depth to your actions, making it a slow-paced race to be the first person to build up your ki power, which quickly becomes monotonous. With the wide assortment of deep and varied fighting games already on the market, it’s impossible to ignore the many faults present in this often-dull anime-inspired brawler. 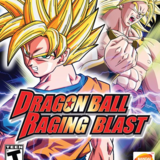