A solid beat-'em-up and one of the better Dragon Ball games.

Dragon Ball GT: Transformation is a Final Fight-style beat-'em-up set in the universe of the popular Dragon Ball GT cartoon series. The game doesn't bring anything new to the this genre, but its rock-solid design and succulent visuals should be more than enough to satisfy Dragon Ball fans that are looking for some on-the-go butt-kicking.

The opening cinema shows an adult Goku training with his friend Uub. Seconds later, we see Goku transformed back into a teenager at the hand of a jealous Pilaf and the black star dragon balls. In order to return to normal, Goku and his friends must retrieve the dragon balls, which just so happen to have scattered themselves to different planets in the solar system. Basically, the plot provides the necessary explanation as to why players have to journey from planet to planet and beat up the henchmen and bosses located on each of the game's 12 levels.

You won't find much innovation in the design, but it's still pretty fun to play, because, like any good beat-'em-up, Dragon Ball GT: Transformation makes it easy to dispatch the baddies. Movement happens on a 2.5D plane, so you can maneuver around enemies. Characters can run, jump, and float at the touch of a button. Each character has its own unique attacks and combos, including powerful ki blasts that can sail the full length of the screen. Objects in the environment, such as rocks and street signs, can be picked up and thrown, or destroyed to reveal items that can upgrade your characters' health, strength, and ki attributes.

The game's most interesting aspect is that it's team-oriented. Before you start a game, you have to form a team of three characters from a roster of nine available GT characters. During the game, you can swap teammates at any time by pressing the Select button. Characters regain health when they're out of action, which is nice. The main thing to keep in mind when you play is that when a team member runs out of health, he or she is put out of commission for the rest of the level. Aside from the tag-team dynamic, Dragon Ball GT: Transformation plays just like any other beat-'em-up. You'll run into generic enemies as you walk through each level and then face off against various big, bad bosses at the end.

It's a shame that the story mode doesn't support multiplayer. Certainly this type of game is more enjoyable when you can churn through it with a friend. There are three survival-style bonus games to try, which do support link play in addition to solo play, but it's hardly worth tracking down multiple copies of the game. Rounding out the features is the ability to unlock various hidden characters and galleries by spending the money you pick up during the story mode.

Without a doubt, the jaw-dropping graphics are what ultimately sets the game apart from its peers. Rarely do GBA games push the hardware this much, even those published by Nintendo. The sharp 2.5D backgrounds put the system's full 32,000-color palette to use, the character sprites are large and fluidly animated, and the bosses are downright huge.

There may not be any logic to Goku fighting a dinosaur, a giant robot, or a two-story scorpion, but it sure makes for exciting video game hijinks. Throughout the game, effects such as line scrolling, transparency, and scaling are employed frequently. Some of the environments are fairly creative, particularly those that involve raft riding or flying through the air. Fans of the cartoon will also appreciate that the game's graphics are faithful to the cartoon's art style.

The audio doesn't quite achieve the same splendor as the visuals do, but the music and sound effects nonetheless do an ample job of backing the onscreen action. Each stage has its own music, and there are plenty of different sound effects for attacks, screams, explosions, and the like.

On the whole, Dragon Ball GT: Transformation is a solid beat-'em-up and one of the better Dragon Ball video games available for the GBA. 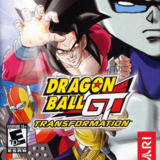