Dracula: The Last Sanctuary has huge lapses in logic, no atmosphere, and very little in the way of respect for Bram Stoker's original story.

Dracula: The Last Sanctuary is the sequel to Dracula Resurrection, and, like that game, it has very distinctive graphics. Unlike its predecessor, which was short and easy, The Last Sanctuary also has a bit more substance. It's lengthy and difficult, and there are puzzles at every turn. Unfortunately, the game is also filled with long, empty hallways bookended by mysteriously locked doors--so it doesn't manage to be atmospheric at all, in spite of its great visuals.

Dracula Resurrection, like so many recent adventure games, was a modern sequel to a classic work of literature. As a sequel to Bram Stoker's Dracula, it made little sense. As an adventure game, it was brief and relatively enjoyable and made up for some of the shortcomings in its story with its great graphics. Dracula: The Last Sanctuary features both the same great graphics and the same silly story. You play as Jonathan Harker, and once again you are trying to save your fiancée Mina from the clutches of Dracula.

You begin the game in London, where Dracula has set up shop in a run-down house. In the house, you'll need to find some clue as to where Dracula may go next. During your explorations of the house, you'll be set upon by werewolves. These werewolves are easily destroyed by sunlight, and you'll find numerous puzzles that require you to reflect the light outside onto the hairy beasts. These puzzles are challenging and occasionally interesting, though less so if you consider that the creators of the game have ignored, without explanation, everything you've ever been taught about werewolves: Werewolves are nocturnal, and sunlight only turns them into naked, confused people.

The major problem with Dracula: The Last Sanctuary, as with its predecessor and other games like it, is that it ignores its source material and makes no effort to explain its own internal logic. For example, important character names, such as Renfield, have been inexplicably changed. And a good part of your time in the game is spent avoiding a Dracula robot. Context is nonexistent--you won't even get text descriptions of your inventory items. When you pick up a pile of paper, the only help you'll get in the inventory screen is a bigger picture of a pile of paper. This tends to add an unnecessary layer of difficulty to the inventory-based puzzles. For instance, the pile of paper's usefulness would have been much more apparent if someone simply had the foresight to label it "sheet music."

The majority of puzzles in Dracula: The Last Sanctuary are locked-door puzzles. Some require you to use inventory items, while others are self-contained and require you to pore over Dracula's cryptic notebooks looking for clues. Many of the latter type are very hard, and most of them will repeat, with different solutions, throughout the game. The repetition of puzzles tends to seem like an artificial means of lengthening the game, but players who are fond of this style of puzzle will undoubtedly find themselves suitably challenged. Occasionally, though, the game cheats. One door puzzle requires you to find and destroy three guardians that prevent you from entering. The catch is that the guardians aren't labeled and blend into the background, and no indication is given that you can interact with them. So not only do you have to sweep the screen with your mouse, but you also must do so blindly, as you are never given any indication of when you are near something important.

There are many frightening adventure games. Sanitarium, Amber: Journeys Beyond, and The Beast Within all balanced challenging puzzle solving with suspenseful storytelling. Dracula: The Last Sanctuary doesn't even manage to maintain a slightly creepy atmosphere. The opening would lead you to believe otherwise, because of its creepy music that sets the stage for a terrifying adventure. Unfortunately, this music is all but absent from the game afterward. The voice acting doesn't help: The confused-sounding actors ham it up like they're auditioning for a part in Mark Borchadt's Coven.

The game's saving grace is its graphics, which are pixilated and muddy during in-game sequences, but beautiful in the cutscenes. Virtually no game to date, apart from Dracula Resurrection, has ever featured such striking characters. They are stylized and detailed and unsettling in a way that the rest of the game should have been.

Dracula: The Last Sanctuary has huge lapses in logic, no atmosphere, and very little in the way of respect for Bram Stoker's original story. It also has great graphics and a tomb full of difficult puzzles. The puzzles will be enough for those who are content with being limited to the challenge of finding a way past locked doors and blocked passageways. But great games transcend their genre's limitations, while good games work within them. Mediocre games, like Dracula: The Last Sanctuary, only serve to remind us of why such things are limitations in the first place. 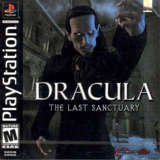