I have had an interesting relationship with Dr. Mario since its birth on the NES more than two decades ago. It was one of a very, very few games everyone in our humble Midwestern house was keen to play: my mom, my sister, me, and even my dad, who has barely picked up a controller in his life. There was something magical about the game among the Kemps family, but as years passed and new games and consoles came into the house, less and less time was spent with visits to the good doctor.

Dr. Mario has made reappearances on consoles since, of course, and I went back and played these incarnations, remembering the good times I had both alone and with my kin. But something had changed. I'd played games like Puyo Pop, Super Puzzle Fighter II Turbo, and Magical Drop in the meantime--games designed to make you both think and move quickly in a competitive environment. When I would return to Dr. Mario, something was off. It felt slow-paced and sluggish, with more tension coming from a heavily virus-filled playfield than from trying to outwit and react to your opponents and their setups. I wondered if, perhaps, Dr. Mario had lost some of its luster due to the genre's evolution. After having played Dr. Luigi, I'm now pretty confident that this is the case.

Dr. Luigi is essentially an upgrade of 2008's Dr. Mario Online RX; it's made by the same developer, Arika, and reuses many of its graphical and sound assets. Mario has bequeathed his practice to his younger brother, Luigi, who seems to have his hands full with a new batch of alien-virus creatures to systematically eliminate. The basic gameplay is the same; two-colored pills fall onto a playing field littered with viruses, and you must line up four or more of the same colors vertically or horizontally to eliminate both pill pieces and viruses in the stack. Set up chains that eliminate several viruses at once to either earn a score boost or cause a headache for your opponent. Kill all the viruses, and it's on to the next stage (or match, if you're playing versus).

But since a straight rerelease of Dr. Mario with some altered visuals and sound wouldn't cut it in today's market, Dr. Luigi offers some variants on the formula. Some of these have appeared before: Virus Buster, first seen in Brain Age 2 and reintroduced in Dr. Mario Online RX, gives you a smaller playfield where you use the stylus and the Wii U GamePad to place pills. It's a nice improvement from the clumsy Wii Remote controls the previous game used, and the ability to play in vertical or horizontal gamepad orientation is a plus. Another semi-new mode is a versus variant called Flash, again from Online RX. The goal in Flash isn't to eliminate all the viruses in the bottle before your opponent, but rather to off a few specific flashing viruses. Online mode is just that: the ability to play Dr. Mario against anyone on earth minus that pesky restriction of needing to be in the same room.

Unique to Dr. Luigi is Operation L mode. Instead of the megavitamins every Dr. Mario player is familiar with, you get two such pills frankensteined together in an L shape. It sounds mildly interesting on paper, but in practice, Operation L is a disappointment. Skilled Dr. Mario play involves your ability to carefully maneuver pills into hard-to-reach places. The big, clunky L pills are so large and unwieldy that advanced placement becomes impossible. When you're aiming to eliminate all the viruses on the field in single or versus play, which is already pretty slow going, Operation L limits your options instead of adding depth or complexity.

Beyond the selection of different play types--Operation L, Virus Buster, and so forth--there are a handful of settings you can adjust: starting stage, speed, and music. If you were hoping for things like precrafted puzzle challenges to test your pill-placing prowess or a story mode, features popularized by many modern puzzle games, you'll be disappointed to find that there isn't much beyond the options offered 24 years ago.

When you're aiming to eliminate all the viruses on the field in single or versus play, which is already pretty slow going, Operation L limits your options instead of adding depth or complexity.

Versus mode options are basic as well, which makes the tendency for games to turn into drawn-out, slow-speed races to kill every virus on your screen all the more aggravating. Forget the momentum-shifting opponent punishments of games like Puyo Pop and Puzzle Fighter; your reward for setting up impressive combos in Dr. Luigi is a few piddly pill bits dropping in. (In Operation L mode, you change your opponent's next piece into something else--usually a color jumble that's near impossible to place--which is infuriating to the recipient but lacks the smug satisfaction of a screen full of slop piling down on your foe.) Flash is considerably more fun, challenging you to find the fastest way possible to eliminate specific viruses before your foe does, a process that involves some clever thinking and careful movements.

Online play, meanwhile, is functional but extremely bare-bones. Dr. Luigi features basic two-player lobbies and a ranked mode, which rarely puts you up against equally skilled opponents. Want to change the type of game you're playing? You need to step out, re-create the room, and hope your buddy rejoins. Don't expect anything like tournament modes or even the best-three-out-of-five battles the original NES version offered, either; after one round, you're kicked back to the continue-or-quit screen.

In the end, Dr. Luigi feels like Dr. Mario Online RX all over again, with a few spruced-up elements and a not-well-thought-out extra mode. That alone would be enough to make you wary of dropping the full $14.99 asking price on this. But in the end, the most disappointing part of Dr. Luigi is that it doesn't give the Dr. Mario formula that shot in the arm it needs to feel magical again. Arika is the mind behind the amazing Tetris: The Grand Master series of arcade games, and I'm disappointed that it can't bring a similar thrill and exhilaration to this classic series. But it could well be that Dr. Mario's pacing and mechanics are relics of its era that would be difficult to bring up to modern standards. Dr. Luigi provides some shallow entertainment, but it's not exactly what the doctor ordered. 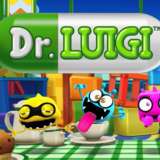 Heidi is a longtime puzzle game player and fan of competitive gaming. Her favorite puzzle series is Magical Drop. She's rather sad that puzzle games don't have as much organized competition as other player-versus-player genres, which is why she is currently a strong advocate for promoting the Global Yoshi's Cookie League.