Doom II provided a crucial step in the evolution of the first-person shooter, but its outdated level design and gameplay mechanics don't entirely hold up today.

The long and storied lineage of brave space marines in first-person shooters can be traced back to the hero of the Doom games; thus, the genre will always owe a debt to Doom and Doom II. But so much has changed since 1994. Although the strength of some aspects of Doom II is still apparent today, its level design and gameplay are antiquated, making it more interesting now as an important part of gaming history than it is as an actual game.

The Xbox Live release of Doom II contains the 32 levels of the original game and a separate, all-new episode of nine levels entitled No Rest for the Living. The game wastes little time with story, giving you only the occasional snippet of text between levels about the population of Earth being held hostage by the demons of hell and other unpleasant situations that only your space marine can handle. This is as it should be; there's no need for a narrative here. All you need to know is this: If it moves, kill it. Oh, and if you see any keycards lying around, grab 'em. In addition to being numerous, hideous, and out for your blood, the demons of hell love to lock doors.

If you're used to more contemporary shooters, stepping into the boots of Doom II's space marine will probably feel a bit strange. The most dramatic differences between how Doom II handles compared to most shooters of today have to do with the speed with which you move and the lack of any vertical aiming axis. Your hero scurries about these demon-infested corridors much faster than his descendants in similar games generally do nowadays, creating a weird sense of floating and flying around the environment rather than walking around in it. Also, you can't look up or down, and just lining up your weapon with the demonic hell spawn in your way on a horizontal plane before pulling the trigger is enough to blow them to bits, even if they're above or below you. This absence of precision aiming and vertical head movement makes the action feel stiff until you get used to it.

One thing you can't really adjust to here is the antiquated level design. At some point between 1994 and today, game designers seem to have realized that making players wander around mazelike levels collecting keys and hunting for doors to open isn't always enjoyable, but Doom II's levels are built on precisely this concept. Things can quickly get frustrating when you find yourself going in circles trying to figure out how to proceed or consulting the minimap to determine where you're supposed to go next.

But as dated as these elements make Doom II feel, the core shooting is still enjoyable. Few games have employed a more memorable host of monsters than the zombie soldiers, demons, specters, and other foul monstrosities that stand between you and victory. The tools you can use to fend off this onslaught make up what remains one of the all-time great arsenals in shooter history. The demons in your path are powerful and can absorb quite a bit of damage before collapsing in a bloody mess, but with chainsaws, double-barreled supershotguns, chainguns, rocket launchers, plasma guns, and the devastating BFG9000 at your disposal, you always feel like you have a fighting chance--if only just barely.

Doom II is no cakewalk, and joining up to three friends to take on the hordes of hell is a fun way to tip the scales a bit in your favor. The game conveniently supports both local split-screen and online multiplayer. There's also a standard deathmatch option if you'd rather shoot at each other than with each other, though the simplicity of the game's point-and-shoot action when compared with current competitive multiplayer offerings is keenly felt. And most of the maps, which are just levels from the single-player game, aren't conducive to exciting multiplayer competition. Doom II's deathmatches were once known to bring workplace productivity to a screeching halt, but they just don't hold up well today.

Doom II is presented in all its pixelated glory, without any of the visual updates you sometimes see in releases of older games on Xbox Live. It's certainly not technically impressive today, but the quality of the artistic design still comes through in the grotesque look of the monsters and the horrific atmosphere of hell. The sound effects are terrific, from the satisfying blast of your shotgun to the chilling shrieks and wails of the demon armies you face. The MIDI tunes that accompany it all give you a pretty good idea of what elevator music in hell might sound like.

The dramatic evolution that the first-person shooter genre has undergone in the years since Doom II's release makes the proposition of going back to hell questionable. You definitely get a lot of game for your 800 points, but the outdated design elements actually make playing the game feel more like an exercise in backward time travel than something to be done for enjoyment. This was an important stepping stone on the path to where we are today, but unless you're eager to experience that evolution for yourself, Doom II is better left in the past. 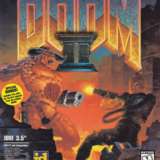