The DK Bongos are responsive, the action can be genuinely fun, and though some of the music choices are extremely weird, there's a little something here for everyone.

With its start as an arcade novelty, the rhythm game genre as we know it has a long history of using game controllers disguised as drums or maracas or electric guitars--as well as a wide variety of music--to coax people into arcades who'd be otherwise intimidated by six-button fighting games and such. Men, women, and children alike have taken to rhythm games because of their intuitive appeal. Donkey Konga very much falls into this same category, and as the name suggests, it features its own proprietary bongo controller. Indeed, Nintendo and Namco's new GameCube rhythm action game starring Nintendo's barrel-smashing gorilla makes a serious effort to appeal to the whole family--which is great if you're buying the game for the whole family, though it kind of limits the game's appeal for players with more specific musical tastes. Donkey Konga's broad, sometimes bizarre range of music will probably be hit-and-miss for most individuals.

The beauty of the DK Bongo controller, which comes bundled with the game and looks like a basic set of bongo drums, is that it's largely self-explanatory. Though, aside from the obvious left and right drum pads, there is a small microphone in between that is there to sense the sound of a hand clap. Ultimately, tapping the sides of the bongos or simply saying the word "clap" into the mic seems to get the job done, too, which speaks to the extreme sensitivity of the microphone. Using these three basic motions--hitting the left drum, hitting the right drum, and clapping your hands--Donkey Konga builds a full-on rhythm action game. By design, it's fundamentally easy to control, but that doesn't prevent Donkey Konga from offering a hearty challenge.

The conceit behind Donkey Konga almost doesn't require explanation, either--you hit the drums in time with the music--but the way this action is presented onscreen doesn't necessarily play directly to the strengths of the DK Bongos themselves. A row of icons scrolls from right to left, and your goal is to perform the corresponding action once an icon is inside the small circular target on the far left of the screen. The icons themselves are color-coded, with the yellow icon standing for the left drum pad, the red icon for the right, and a pink icon for smacking both at once, along with a blue starburst icon for claps. Having to decode the colored circles, which can come at you at a pretty fast clip, is an extra layer that Donkey Konga could have done without. The interface is still functional, though, and the game gets plenty of mileage out of it.

Using this one interface, Donkey Konga offers a few different modes of play. The street performance mode lets you pick any song you please and play through it for coins--the more accurate your drumming, the more coins you'll earn. Coins can then, in turn, be used to unlock minigames and songs in other modes. The unlockable minigames include a whack-a-mole clone, a banana-juggling game, and a vine-climbing race that evokes memories of Donkey Kong Jr. These minigames are a fine distraction, and though they don't have much lasting value, they provide a glimpse of other possible uses for the DK Bongos. If you have a buddy and a second DK Bongo controller (you can play the game with a standard GameCube controller, but, as you can probably imagine, this is pretty pointless) you can play co-op in the challenge mode.

On the other hand, the battle mode is strictly a head-to-head versus experience, in which two players try to outscore each other. The game adds a bit of chance to the battle mode with the introduction of a few special icons. The game borrows the "POW" icon from the original Mario Bros., and, when hit, this icon will take away a chunk of your opponent's score. A slot-machine interface will also randomly appear during battle mode, and at the same time you'll get three drum icons with the word "stop" over them. If you can hit all three of these icons with the same level of accuracy, you'll get a substantial point bonus. If competition, be it against the computer or another player, isn't your thing, the jam mode strips out any point tallies and lets up to four players just play.

In all, Donkey Konga does a good job of catering to players of all skill levels. The three levels of difficulty--monkey, chimp, and gorilla--ramp up the challenge at a nice pace. Beginners should feel comfortable with monkey, and the chimp level is just right for those who have been playing Donkey Konga, or really any rhythm game, for a while. The gorilla level is an experts-only experience, and though there isn't incredible depth to the action, it will regularly challenge you with tight, complex strings of commands that will make even the most hard-bitten rhythm game players sweat. There are songs with multiple timing changes, and the game can go from mimicking the rhythm of the song to mimicking its melody at the drop of a hat, which can be a bit bewildering but will keep you on your toes. A good sense of rhythm can get you far--but as with most rhythm games, true mastery will require total memorization of the different patterns for the different songs.

There are more than 30 different songs in Donkey Konga--a respectable number for a rhythm game--but the selection of music that you'll be banging your fake bongos along to is less than cohesive. Though the game doesn't cordon them off from each other, there are three major groups of music in the game: grade-school sing-alongs, contemporary pop, and Nintendo theme songs. You likely already know many of the sing-alongs from your own youth, though you probably don't remember them being as slickly produced and Euro-dance-club-friendly as the versions of "Yankee Doodle" and "Bingo" included in Donkey Konga. The Nintendo music includes the highly recognizable Super Mario Bros. and Legend of Zelda themes, along with the themes for the cartoons based on Kirby and Pokémon. "The DK Rap," originally featured in Donkey Kong 64 and last heard in Super Smash Bros. Melee, is a no-brainer addition to the soundtrack, and, unsurprisingly, it's the best fit of the Nintendo songs.

The choices that Nintendo made when picking pop songs for the US version of Donkey Konga are probably the strangest part of the game, just because they're so random. There's everything from The Kingsmen's "Louie, Louie" to the B-52s' "Rock Lobster" to "Right Here, Right Now" by Jesus Jones. Blink 182's "All the Small Things" is as contemporary as the game gets, though it's worth noting that none of these songs are actually performed by the original artists, but rather were recorded by decent cover artists. It's pretty apparent that Nintendo really wants Donkey Konga to be a full-on family activity, and the music selection goes a long way toward helping it appeal to a broad age range. However, if you yourself are not a family of four, you'll probably find yourself zeroing in on a handful of the songs that appeal to you and ignoring the rest.

Though your vision will be too tightly focused on the incoming stream of drum commands while you're playing Donkey Konga to really notice, taking a break and watching someone else play reveals the underlying graphics to be technically and creatively unexciting. The backgrounds stick to basic jungle-type stuff, which is fitting but still pretty monotonous. The characters have a prerendered look to them--not unlike the trademark look of the Donkey Kong Country games--that is quaint at best and dated at worst. Again, this doesn't have a massive impact on the gameplay experience, but it doesn't make the game terribly enticing for onlookers.

If Donkey Konga's primary goal was to be a rhythm game that anyone could play, then it succeeded. The DK Bongos are nice and responsive, the action can be genuinely fun, and though some of the music choices are extremely weird, there is, in fact, a little something here for everyone. Whether the game will be right for you will depend on how much of that "everyone" you account for. 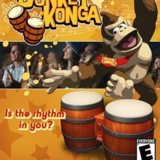