The drumming action itself is still responsive and entertaining, but the whole package simply doesn't feel as inspired as the original, and it makes little effort to expand or improve upon its predecessor.

A mere seven months after the original Donkey Konga hit US GameCubes, Nintendo and Namco have cranked out a sequel that, save for an all-new selection of songs, is virtually identical to its predecessor. But even if you're a fan of the original bongo-bangin' rhythm game who's eager for more of the same, it's likely that the game's strained musical selection will put a damper on the experience.

The soundtrack in the original Donkey Konga was admittedly fairly bizarre, featuring children's sing-alongs, classic Nintendo theme songs, as well as pop music through the ages, from "Louie, Louie" to "All the Small Things." It was wildly inconsistent in tone, but it ensured that there was a little something for everyone. Donkey Konga 2, however, seems more concerned with being hip than providing a selection of songs that complement the percussion-based gameplay. But to this end it's not particularly successful, as most of the modern music included in the game is just old enough to be dated, as if the songs were picked off the radio from two years ago. Certainly there are plenty of people who still enjoy Incubus, Mary J. Blige, Good Charlotte, Pink, and The Crystal Method, and some of these songs do work well in the context of the game, but it just feels like the game is trying too hard. Making the whole effort seem especially futile is that none of these songs are performed by the original artists in Donkey Konga 2, leaving you to listen to mediocre covers of pop music that's just behind the curve.

If you can get past the poorly calculated soundtrack, you can expect pretty much the same experience offered in the first Donkey Konga. Using Nintendo's special DK Bongos controller, which can either be bought bundled with Donkey Konga 2 or purchased separately, you'll bang and clap along to the music, following the patterns of a continuous stream of onscreen cues. The controller itself is extremely intuitive, though the way the cues are presented isn't quite as elegant. Still, Donkey Konga 2 is an extremely easy game to pick up, yet on the higher difficulty levels it is certain to provide a challenge for even the most seasoned rhythm game veterans.

Donkey Konga 2 makes some tweaks to the gameplay modes found in the original, though the changes are mostly quite minor, and the overall experience seems identical. The street performance mode, the game's main mode of play, lets you pick from any of the game's 32 songs and play through it for coins--the better your timing, the more coins you'll earn. Coins can then, in turn, be used to unlock minigames and songs in other modes. The minigames include barrel race, where you race to mimic strings of onscreen commands faster than your opponent, which can be either the computer or another player, and rhythm keeper, a Simon Says-type game where you have to memorize and mimic strings of commands on the fly. Though neither is quite as compelling as the minigames found in the original Donkey Konga, they're still a decent little distraction.

The rest of the modes are just slight variations on the street performance mode. The challenge mode tests your endurance by throwing a consecutive series of songs at you but limiting the number of mistakes you're allowed to make. The concert mode challenges players to work together, either by making three players cooperate on a single DK Bongos controller or by making four players, each with his or her own controller, play in concert.

Though all of the modes in Donkey Konga 2 can be played cooperatively, the battle mode is strictly a head-to-head versus experience, in which two players try to outscore each other. The game adds a bit of chance to the battle mode with the introduction of a few special icons. The game borrows the "POW" icon from the original Mario Bros., and, when hit, this icon will take away a chunk of your opponent's score. A slot-machine interface will also randomly appear during battle mode, and at the same time you'll get three drum icons with the word "stop" over them. If you can hit all three of these icons with the same level of accuracy, you'll get a substantial point bonus. Additionally, there's an odd rock-scissors-paper mechanic that can make for a tidy little point bonus. The special rules introduced in the battle mode add a certain random aspect to the gameplay, but they can also be kind of confusing and have a tendency to muddle the experience.

The visuals in Donkey Konga 2 are all but completely dominated by the incoming stream of drum commands, making it an uninteresting game to watch, though when you're actually playing you'll likely be far too focused on the action to notice the often plain-looking scrolling backgrounds or the poorly animated prerendered characters that pantomime your drumming. Though the look is more varied in theme than the jungle backgrounds in the first Donkey Konga, it still isn't particularly interesting to look at.

Even if the song selection were more inspired, Donkey Konga 2 would still seem less like a proper sequel and more like an expansion pack. The drumming action itself is still responsive and entertaining, but the whole package simply doesn't feel as inspired as the original, and it makes little effort to expand or improve upon its predecessor. Those new to the series are better off checking out the original, and returning drum maniacs should seriously consider the track listing in Donkey Konga 2 before making the investment. 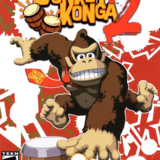 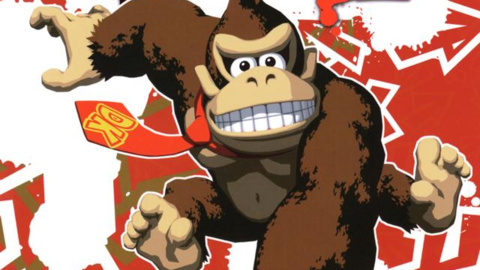 Get ready for a fresh new set of popular songs in the sequel to Donkey Konga. Donkey Konga 2 features more than 25 new songs, ranging from pop and hip-hop to R&B and rock.