Donkey Kong Jungle Beat is a scream...for the first eight levels. Once you've seen what the game has to offer, though, there's not a lot to come back to.

Bongos aren't just for drumming anymore. Donkey Kong Jungle Beat takes those bongos that came with Donkey Konga and applies them to a side-scrolling adventure. The good news is that Donkey Kong Jungle Beat is a very inventive, unique game that has a ton of charm and is a blast the first time you play it. But don't blink, because the bad news is that this is also a game that you'll probably finish in three or four hours, meaning that the first time you play it might also be your last.

Yeah, you read that right. You play Jungle Beat using the bongo controller, but it's definitely not a rhythm game. If you're so inclined, you can play the game with a standard GameCube controller, but this is about as much fun as playing a dancing game without a dance mat or a light gun game without the gun. The bongos are an integral part of the experience, and without them, this is a barely average platform game.

You play as Donkey Kong in Jungle Beat, and your main goal is to grab as many bananas as you possibly can. The bananas translate into "beats," and these beats serve as both your score and your health. When you're hit, you lose beats, and when you run out of beats, you'll have to start the level over again. However, the game's super easy, so don't be surprised if you find yourself beating it without losing once. Upon completing a three-level world, your beats are tabulated and offered up to a hollow tree, which awards you crests based on how many beats you finish a level with. In turn, these crests are what let you access the next batch of levels. It's easy to at least get the bronze and silver crests each time, but for that gold crest, you might have to go out of your way to grab as many bananas as possible.

The bongos may seem like a limited control device, but you'll have a surprising number of different moves. Banging on one bongo moves you either left or right. Slapping both causes you to jump. Clapping, or otherwise tripping the controller's sound sensor, causes Donkey Kong to clap; this is your only way of interacting with the environment. By clapping, you can pick up nearby bananas, grab onto swinging vines, grab onto monkeys that launch you ahead, grab onto birds that let you fly to otherwise unreachable parts, and so on. You'll also do some swimming, ride a few different types of animals, bust out some occasional butt-stomps, and even pull out a backflip or two. The controls are most of the fun here, and they're well integrated into the game. Although, finishing the game in one sitting may tire out your arms a bit.

The platforming in Jungle Beat is nicely done, with a lot of bouncing around and some unique challenges. In a couple of spots, a level will actually be a race against other creatures. Sometimes you'll be on the back of a high-speed animal. Sometimes you'll be underwater. But a lot of the game's charm comes from its bosses. The boss battles aren't tough, but the bosses themselves, such as a metal elephant that fires projectiles from its trunk, are really cool. It's a shame that, after the first eight or 10 levels, the bosses start to repeat. Having a bare-knuckle brawl against a large boar is pretty amazing the first time you see it. But after the third time, you'll start to wonder where all the imagination shown in the first half of the game went.

The lack of overall length, combined with the way many of the boss encounters from the first half resurface once or twice in the second half of the game, really rob Donkey Kong Jungle Beat of a lot of its appeal. It's hard to imagine a scenario where three hours of gameplay is worth $40. Sure, you can go back into levels you've completed to attempt to collect all of the crests, which will unlock a level here and there as well as a second final boss fight, but really, these don't add enough to the core game to offset its shockingly short nature.

The look of the game is as crisp and clean as you'd expect from Nintendo. The game never gets overly fancy, but the characters animate well, and little things, like the split-screen stare downs that happen before some of the boss fights, really add to the game's charm. The sound and the music in the game also fit really well, though the constant sound of slamming bongos sort of gets in the way.

Overall, Donkey Kong Jungle Beat is a scream...for the first eight levels. Once you've seen what the game has to offer, though, there's not a lot to come back to. Anyone with moderately developed action game skills will finish this game in one day, probably without actually dying once. That makes this a rental, at best, but if you're shopping for young children that like to smack stuff, or if you already picked up the bongo drums and are desperate for anything else that uses them, you could make a case for adding this one to your permanent collection. 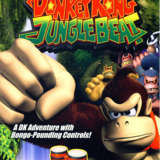