This is a perfect port of the NES version of Donkey Kong Jr.--all four levels of it.

Much like the version of Donkey Kong that hit the Wii's Virtual Console a few weeks back, Donkey Kong Jr. is a port of the NES version of the game--not the arcade original. But this fact is less of a detriment to the game than it was in Donkey Kong, as none of the original arcade game's levels have been removed this time around. Yes, Donkey Kong Jr. is fully intact, but that means you only get four full levels to play through. And though it was certainly a great game for its time, it's hard to get terribly into such a simplistic and brief platformer in this day and age. It's even harder to justify paying 500 Wii points ($5) for it.

Donkey Kong Jr. is effectively a sequel to Donkey Kong, but this time, the tables have turned. Mario has captured the senior Kong, and DK Jr. must rescue his father from Mario's clutches. You go about this by playing through a series of four levels, each rife with pitfalls to navigate. The main trick to the gameplay is that DK Jr. can climb various vines scattered throughout each stage. Mario will keep tossing creatures at you that will either climb down those vines or hit you while you're climbing around on them, so you have to time your movements between vines, as well as your jumps around some of the moving platforms and other typical pitfalls, to avoid being touched. Each time you get up to the platform on the top level, you've beaten the stage.

It was a very fun game for its time, but it hasn't held up very well over the years. The only multiplayer is a two-player, trade-off mode, and as fun as some of the levels can be, with only four to play through, you're over and done with the game before you know it. Apart from DK Jr.'s cute character sprite, the graphics are rather archaic, and the audio isn't all that enjoyable, despite a decently catchy soundtrack. The short length and crusty graphics and sound are to be expected from a perfect port of a game from 1986, but for the $5 that's being charged for it, it's tough to recommend to anyone that didn't count Donkey Kong Jr. among their most favorite of NES games. If you're on a nostalgia hunt, there are far stronger options available on the Virtual Console. 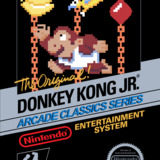 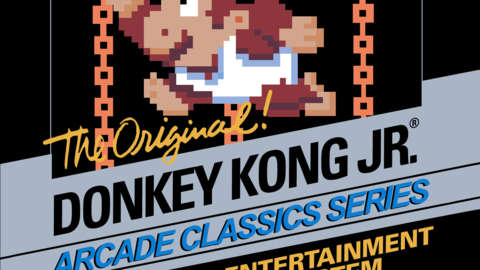 Rescue your father from the evil Mario in this role-reversing sequel to Donkey Kong.