Donkey Kong Country is one of the most playable and replayable Game Boy Color games ever created.

For some, 1994's Donkey Kong Country represents the modern-day reinvention of the entire platform gaming genre. At the time, it was thought that 16-bit systems couldn't have CGI rendered backgrounds and character sprites, nor could they ever deliver orchestral-sounding music and CD-quality voice samples. How could they? At 3.5MHZ, with merely 2MB of cartridge space, the Super Nintendo was simply too weak a system to promise perfect gameplay, realistic visuals, and CD-quality sound. Rare's Donkey Kong Country proved these notions wrong. Whether it had you swinging from vines in rain-soaked forests or pouring through torrential snowdrifts in the mountains, the game utilized every graphical and audio trick in the Super Nintendo's playbook, while at the same time offering time-tested platformer gameplay. Somehow, Rare has pint-sized the action and brought a near-exact replica to the Game Boy Color handheld, which is an accomplishment that is perhaps more impressive than the game's original release.

Once again, King K.Rool has stolen Donkey Kong's banana stash, and Donkey Kong needs your help to get them back. Doing so will require you to traverse 41 platform-jumping levels across seven different environments, all of which is kept nice and safe via the game's three battery save slots. In search of K.Rool, you'll have to get past thousands of evil Kremlings, ranging in size from tiny chipmunks and baby snakes to larger beasts such as bald eagles and crocodiles. Leading them are four dastardly bosses - Gnawty, Necky, Bumble B, and Dumb Drum - and they all bar the way with their own special blend of villainy. Impressively, while the game's color palette is noticeably less diverse than that of its 16-bit progenitor, only a little overall graininess and loss of detail prevents the GBC port of Donkey Kong Country from being a pixel-perfect copy. Donkey Kong, Diddy Kong, and all of the game's cookie-cutter enemies are large and well animated, while every nook, cranny, and secret area of the game's 41 levels is rendered gloriously.

Although it's a valiant effort, it should be noted that Donkey Kong Country isn't a perfect translation. Observant old-timers may notice the removal of the blowing snows in Ice Age Alley, or the elimination of translucent lighting in the Misty Mine level, while true nitpickers will find fault with the game's complete lack of parallax scrolling. On the audio front, the game sounds roughly the same, but not exactly. The GBC version's musical score, with its haunting melodies and chimelike backbeats, still maintains the same general new-age feel of the original, but its emotional impact has been greatly diminished thanks to the GBC's limited audio range. Sadly, with the exception of Donkey Kong's grunt, all of the game's digitized sound effects are gone, replaced with a standard array of beeps and blips. The game certainly sounds better than most third-party efforts, but recent releases such as Crystalis and Bionic Commando prove that better sound effects are possible.

Inasmuch as Donkey Kong Country strives to be faithful to the original in terms of design, visuals, and sound, the game definitely plays the same - walk to the right, tap B to roll, and hit A to jump. Using these controls, the task is a simple one: Pounce on bad guys, jump across platforms, collect bananas, and reach the level's exit without getting knocked out. Of course, this particular task isn't always easy, thanks to overwhelmingly lengthy levels full of deadly pits and venomous enemies. Thankfully, though, Rare evens out Donkey Kong Country's cruel level design out in a number of ways. At the outset, you're given five lives with one hit point each to help you survive the onslaught. However, if you're lucky enough to snag a DK barrel, you'll be allotted an extra hit point, taking the form of one of the Kong family kin, Diddy or Donkey. Diddy is fast and jumps high, while the elder Kong is built Ford-tough for taking out larger enemies. Gathering extra lives is also good strategy. Gather 100 bananas, collect the letters to spell K-O-N-G, or find hidden life balloons, and your life count will increase by one. Each level contains between three and five opportunities for gaining extra lives, so romping around with 20 or 30 lives in reserve isn't too far-fetched. It may seem like overkill, but the abundance of extra lives serves the game's overall premise, that of exploration. Donkey Kong Country tracks your progress by displaying the percentage of secrets you've discovered within each level, and since you can only witness the game's proper ending at 100 percent, there's a rather large psychological push to play, replay, and re-replay prior levels.

Not content to be a run-of-the-mill platform game, Donkey Kong Country has its share of gameplay twists. Animal boxes can transform you into one of four animals: a rampaging rhinoceros, a stabbing swordfish, a leaping frog, or a speedy ostrich. Not only do these forms allow you to run faster and jump higher, but they also give you an extra hit point as well. In tandem with these in-level helpers, a number of helper spots scattered between levels offer some relief from the madness. Cranky Kong offers up gameplay tips and witty repartee, while Funky Kong lets you warp to previous levels. The most useful of all, though, is Candy Kong's spin barrel, a bonus game that is always good for a chance to collect extra lives or secret coins.

Speaking of bonuses, Rare and Nintendo have included a plethora of goodies for those wondering what to do with the game after it's been finished. If you have a Game Boy Printer, you can print up game-inspired character and alphabet stickers, as well as special stickers that become available as you complete the game itself. There are also two hilarious minigames to explore, Funky Fishing and Crosshair Cranky, the latter of which contains a multilevel quest all its own. Surprisingly, both minigames also include link-cable support. As is to be expected, Donkey Kong Country's minigames bear no other purpose than to lend the game extra replay value, which is fine. They're certainly as addictive as any in the Game & Watch series. 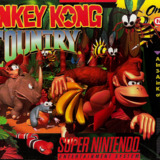