A contemporary American poet once said, "two is not a winner and three nobody remembers." Clearly, he wasn't talking about Donkey Kong Country 2, a platformer for the Super Nintendo Entertainment System that simultaneously fills the mighty shoes of its predecessor while also exceeding it in every way. The sequel has more levels, the computer-modeled graphics are more detailed, and there's plenty more for you to see and do. Now, Nintendo is giving Wii owners another chance to enjoy this winner of a platformer by making it available for the Wii's Virtual Console.

Donkey Kong Country 2 isn't just a set of new levels put together with the assets from Donkey Kong Country. Its 50-plus levels still fall into the "run to the right, jump over gaps, and avoid enemies" school of level design, but they're larger, involve a lot more climbing and backtracking, and give you many more opportunities to swim, swing from vines, and ride in mine carts. Once again, riding on top of friendly animals frequently comes into play, with a spitting spider and a high-jumping snake joining the rhino, swordfish, and parrot from the first game. In Donkey Kong Country, DK and Diddy were functionally identical. In DKC2, the two characters that you can alternate between, Diddy and Dixie, each bring something unique to the table. Diddy can pick up and throw barrels more rapidly, while Dixie can twirl her ponytail to float for brief periods. The duo can also join forces and perform a team throw, something that wasn't possible in the previous game. Just tap a button, and the lead character will pick up and carry the straggler. You can then throw your apelike cannonball at things by pressing the A button. This move lets you collect items, activate switches, and grab vines that would normally be unreachable. Every level has secrets that you'll only find by experimenting with the team attack.

You can still stockpile extra lives by gathering bananas, grabbing 1-up balloons, and collecting K-O-N-G letters, but don't let the ability to hoard lives lull you into thinking that Donkey Kong Country 2 is an easy romp. It isn't. The increased variety of hazards and enemies means there are lots more ways to die, and the sadists at Rare put together some truly challenging levels. Boss battles also require all sorts of crazy acrobatics and barrel-tossing skills. It'll take you a sizable span of time to reach Kaptain K. Rool and rescue Donkey Kong, let alone find all of the hidden kremcoins so that you can access the lost world levels and see the true ending. Thankfully, the game is challenging without coming across as unfair. A little trial and error is usually all that's required to hone the skills necessary to get through a level.

Stylistically, Donkey Kong Country 2 looks and sounds very different from the first game. It uses the same sort of computer-rendered graphics and realistic animal noises, but the tone is darker and there's more detail to digest. The jungles of Kong Island were bright and inviting. By comparison, Crocodile Island is a moody place full of shipwrecks, caves, and swamps. It's also home to a bigger menagerie of rats, porcupines, vultures, and other feral enemies, in addition to the lizards, bees, and fish that pestered DK and Diddy in the original game. Once again, everything was modeled in 3D before being transformed into 2D sprites and background layers, so the characters and scenery have a lot of depth, even though the game is a 2D side-scroller. Some of the levels in the original DKC made use of fog, rain, and heat distortion effects to bring the surrounding environment to life. Nearly every level in DKC2 has these effects, although they're usually put to use to make the backgrounds look more menacing. A similar shift in tone is evident in the game's music. The original DKC had an upbeat jungle soundtrack that Calypso legend Harry Belafonte could have sung over. For DKC2, Rare kept the same tropical instruments but came up with a wider range of musical compositions that evoke a gamut of moods from tense to joyful. In some levels, the music will fade out and let the noises of the birds and insects in the background set the mood.

You'll need a GameCube controller or a Classic Controller to play the game, since the standard Wii Remote doesn't have enough buttons. Once you get past the nag screen that tells you to plug in your preferred controller, you'll discover that the Wii emulates the game beautifully. The action never stutters, and the audio is crystal clear. You may notice the rough edges around the characters if you play on a high-definition set and sit close to the screen, but it's not so bad that it'll actually distract you. Those rough edges aren't as obvious on standard-definition sets, because the lower resolution and interlacing tend to hide such imperfections.

If you're looking for a diverse platformer that'll take you a while to finish, look no further than Donkey Kong Country 2. It's well worth the 800 Wii points that you'll need to fork over to download it to your Wii. 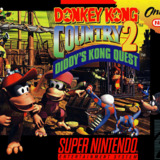