Donald Duck: Goin' Quackers is most definitely a kids' game, but there's enough going on in it that even older players could get a kick out of this simple yet attractive game.

Donald Duck: Goin' Quackers has run the gamut when it comes to consoles--Disney's most irritable character has waddled through the PlayStation, Nintendo 64, Dreamcast, and the PlayStation 2. Now, almost two years later, he makes his GameCube debut in a polished port of his previous platforming adventure. Once again, Donald must rescue Daisy from the clutches of the vile enchanter Merlock, whose plans for world domination must be foiled. Most assuredly a game intended for younger audiences, the GameCube version of Donald Duck: Goin' Quackers is a sharp-looking, amusing romp through a handful of levels that should please those with a taste for the game's whimsical nature.

Donald is a fairly capable character despite the game's simple controls. He's capable of executing an effective double jump, swinging punches, and executing a flying kick. When charged up with the delicious goodness of a milkshake (which replenishes Donald's state from irritated to happy), he can end a punch combination with a short-range sonic scream attack that nails enemies from a fairly safe distance. Donald roams each level, bopping enemies or bouncing off their heads to reach each stage's end, assembling a piece of a weathervane for his pal Gyro Gearloose's teleporting machine. Collecting gears (individually or packaged in gift boxes) along the way will not only give you lives, but also add letters to the word "special," which appears onscreen. Players will find that the location of gifts and enemies are such that you can often bounce from one to the next so that you don't touch the ground. Destroying three enemies in a row in such a manner and then hitting the right trigger puts Donald in special mode, where you have three seconds to enter a five-button command, revealed at the end of the stages. This command shows a brief skit of Donald performing an amusing act, like slam-dunking a basketball in a tutu, posing as an Egyptian pharaoh, or stumbling through any of a number of mishaps involving pratfalls, slip and falls, or more bizarre accidents. The way these shorts are shown, under a colored spotlight against a black background, is a rather nice break from the colorful sameness of the platform adventure. Plus, there's the added bonus of momentary invincibility.

The game is laid out in four major areas: Duckie Mountain, Duckberg, Magica De Spell's Haunted Mansion, and the evil Merlock's Ancient Temple. These stages each contain four different sublevels and a final boss battle. The first two levels in each stage are played from an overhead, behind-the-back perspective, the next is a side scroller, and the fourth has Donald racing toward the screen away from Merlock's diabolical summoning--a massive, disembodied hand. The Crash Bandicoot-like mix between level types keeps any one level type from growing tiresome, and no one level layout is better than the others. The side-scrolling levels can be more challenging for some and can swallow a slew of lives, while the levels in which you need to race toward the screen are the most frantic but can often be completed on the first try. What remains constant, however, is that Donald Duck: Goin' Quackers provides for plenty of checkpoints, extra lives, and other game mechanics that keep the game from ever becoming far too challenging.

Playing Donald Duck is a straightforward process, with little decision making to do along the way, aside from occasionally having to time leaps from precarious positions. One annoying aspect of the game is the often awkward perspective, which makes the judgment of depth perception a significant challenge in key areas. Making precise leaps onto floating pedestals or gifts can also often result in undeserved loss of lives. You may find that unless you're extra careful, underestimating distances or overestimating your leaping range hinders your progress more so than each level's inherently designed difficulty.

The boss battles, where you face such foes as a giant egg-laying chicken, the Beagle Boys, and Magica De Spell, are all quite fun, if a tad too similar in nature. Each has you avoiding a projectile in an area made for movement, like a circular ring or a large square grid. Eventually, as the boss goes through a series of easily avoidable attacks, you get the opportunity to nail them, and after a couple of repeated sessions, they'll go down for the count, leading to the next main area.

Easily the best-looking version of the game thus far, Goin' Quackers on the GameCube features smooth lighting effects, comical animation, and a more polished, cartoony look than the other platforms could achieve. The brief FMV sequences look identical to those in the previous versions of the game, and in general, enemies and character models haven't changed at all from a design standpoint when compared with those from the PS2 version of the game. However, the game in general looks extremely sharp on the GameCube, with an almost cel-shaded look to the characters, each bearing a sharp outline, and much more easily distinguishable enemies and traps than those in the other versions of the game. The backgrounds are also nicely detailed, including subtle nods to Ducktales' history, like Uncle Scrooge's money bin at the end of the Duckberg stage. Donald himself also looks great, thanks to better shading and lighting than in previous versions, which help emphasize his colorful animation routines. Donald has a nice array of these animations, both when in action and idle. When Donald reaches the edge of a platform and saves himself in the nick of time, he teeters back, and you can clearly see that if weren't for an inch or two, it would have been over. When in a good mood, Donald likes to get his dance on, and you'll be hard pressed not to at least chuckle when watching this.

The music in Donald Duck: Goin' Quackers is also of solid quality. Each level has a distinctive tune that sets the scene nicely--of particular note is the background music for the Haunted Mansion stages. The melodies are generally uplifting, but they are also upbeat enough to inspire fast, frenetic jumping action. The sound effects are also quite well done, including the sounds of enemies, such as the pavement-pounding, pile-driver-riding Beagles in Duckberg, clattering skeletons in the Haunted Mansion, and the aggravated tirades of Donald himself. In fact, the genuine Disney voice crew provides the voices for Donald, Magica, Daisy, Donald's nephews, and all the rest. Every bit of dialogue is spoken, and this may add significantly to the game's value, as well as serve as a bonus to those who are enamored with the characters.

While what is there is quite good, there's not enough of Donald Duck: Goin' Quackers to appeal to players who want a lengthy challenge. Many more experienced players will find they can cruise through the game in less than two hours. Those who enjoy Donald's journey the first time through can continue playing to find secrets, unlock new costumes, and complete time attack challenges and special move challenges, although most players will best be served with a rental. Donald Duck: Goin' Quackers is most definitely a kids' game, but there's enough going on in it that even older players could get a kick out of this simple yet attractive game. 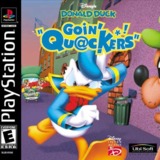 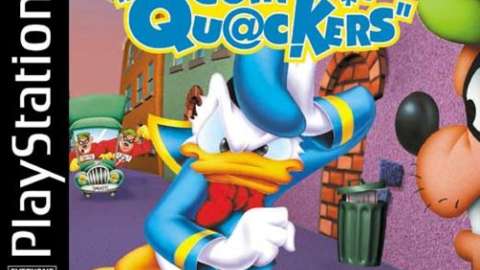 Children will enjoy the lively adventures of Donald Duck, and some of those who enjoyed the DuckTales animated series and are looking for a comical Disney romp will want to pick this up.