This role-playing board game takes delight in letting you mess with your friends, and it's fun for as long as you can tolerate its slow pace.

Playing Dokapon Journey may cost you your friends. A seemingly innocuous board game with role-playing elements and a cutesy anime look, publisher Atlus' self-proclaimed "friendship destroying" game gives you multiple avenues for annoying your pals, from the opening salvo to a last-second potshot. Dokapon Journey was originally developed for the Wii and PlayStation 2, but having it on your Nintendo DS gives you the ever-practical scenario of making enemies out of friends during that big summer road trip, and it's fun, as long as you can overlook some small annoyances and its slow pacing.

The game takes place in the titular Dokapon Kingdom, a massive, sprawling landscape consisting of several towns, shops, caves, and waterways. These locations, as well as several points in between, are connected and each acts as a spot on a game board. Flicking a six-space spinner gets you where you need to go. Landing on an empty spot--or a town under attack--thrusts you into battle, while landing on a church, shop, or treasure chest allows you to rest, trade (or steal), and collect items respectively.

Much like the principle behind the Mario Party games' stars, victory in Dokapon Journey depends heavily on how much gold you manage to accumulate. The key to this is liberating towns. At any point during play, a town will be attacked by a special monster represented onscreen by a vaporous mass. If you defeat this particularly strong enemy, you'll be showered with cash, the townspeople's adulation, and maybe even a gift from your competitors--involuntarily donated, naturally. You will also be able to collect taxes from the towns you've saved. Therefore, the appearance of this special monster sends players in a wild dash to save the town in question. You shouldn't rush in prematurely, however, because it's a good idea to spend some time landing on empty spots to battle enemies so you can gain experience and gold, power up your character's attributes, and find stronger equipment with which to fight.

The battle system is simple. While attacking, you can perform a normal attack, perform a powerful strike, use a special ability, or use a skill. While defending, you can defend against a normal attack, defend against a magical attack, counterattack, or surrender. This follows a simple rock-paper-scissors rule set (hint: powerful strikes are easy to counterattack, so be careful when using them) that you'll quickly pick up. There's also a solid balance between taking the time to level up and sprinting for the towns. This allows for some simple strategizing. Do you rush in and pray that you can take on the ugly beasts even if you're weak? Do you take the time to build up your moxie at the risk of letting someone else get to the goal first? Do you attempt to collect magic spells and pepper the monsters--and your opponents--from afar? Yet you're never burdened with having to consider complex strategies within or outside of battles, which keeps Dokapon Journey's simple, party-oriented spirit alive. Even if you fail to liberate a town, another monster will pop up in a random location immediately afterward, offering you another chance to succeed.

This leads to one of Dokapon Journey's notable issues, due in large part to the kingdom's size: It's not uncommon for a monster to surface in a town far away from every player, which means that getting to the goal will prove to be a chore. This is exacerbated by the inherent random nature of board games. Imagine the frustrating scenario of being pumped up to slay a beast more than 30 spaces away and then spinning a whole mess of ones and twos. There's no zoom-out mode either, so locating where the monsters--as well as any other landmarks--are in relation to you is frustrating, which leads to a trial-and-error session of scrolling around the map just to find out where you should be heading.

There are some measures to speed up the pacing, if you're lucky to happen upon them in shops or in a treasure chest. There are various items and spells that will teleport you closer to your goal, teleport the monster closer to you, lure everyone on the playing field--including the monster--to the same spot, damage the monster or your opponents from afar, and even give your opponents foot cramps so that they're limited to moving a single space for the next several turns. These abilities represent a good chunk of the friendship-destroying tactics in Dokapon Journey, and they're amusing to deploy when your buddy thinks he's got a monster on the ropes. Occasionally, there will be a random minigame to unexpectedly shake things up a little bit--one such challenge requires you to rotate a bicycle pedal with the touch screen as many times as possible--and strong harvests and droughts will add to or penalize your gold stash respectively.

But the very best moments of the game come with obnoxious, glorious opportunism. You can wait until a contestant engages in heated battle with one of the monsters, and then land on his space and steal his kill. Or you can defeat your friend first, and then steal his kill. Or you can let your friend kill the monster, engage him when he's weak, defeat him, and steal the town he just liberated. Anyone who is used to getting the "Opportunist" badge in Super Smash Bros. games, or who has enjoyed sniping an unsuspecting dimwit from afar in a first-person shooter, will cackle with glee at the possibilities in Dokapon Journey. The mischief you can cause is worth suffering through the pacing issues as long as you're lucky enough to have the opportunities present themselves to you and your party rather than your opponents.

The key word is "party," which leads to another notable, though predictable, issue: Dokapon Journey isn't nearly as fun to play solo against computer-controlled opponents. At least one of them will always have precise spins that land it exactly where it needs to go (even on medium difficulty), will be able to guess your battle maneuvers with astounding accuracy, or will get the most appropriate item out of a treasure chest. The main Story mode isn't entirely deserving of the name, with each "chapter" merely representing a new goal from the king, such as "Find my daughter the prettiest dress around," "Find the four items needed to create a ring," or "Defeat the posers who are impersonating you around my kingdom."

There are other gameplay modes that require you to track down the most special colored orbs, defeat your rivals the most times, or liberate the most towns. While these modes do provide something different for you to do, the biggest complaint here is that Dokapon Kingdom is the only playing field you're given. Granted, because the kingdom is sprawling and you've got a variety of spellcasters, fighters, and thieves from which to choose, the experience differs any time you dip into a different mode with a different character class. It would have helped, though, if the boards varied in size, theme, and challenges; staring at the same game map, with the same towns, shops, and caves over and over again gets kind of old.

Nevertheless, if you take delight in tomfoolery and need a game that will test relationships on the go, Dokapon Journey should satisfy your craving. It offers minor tactical and strategic considerations--as well as more direct ways to disrupt your opponents' game plans--that something like Mario Party might lack, as well as a large playing field that will take you hours upon hours to explore. Those needing a new minigame every step of the way, however, will want to think twice. 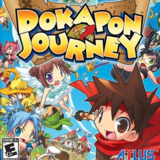 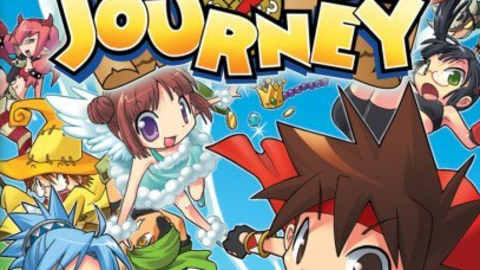 In Dokapon Journey, monsters have invaded the Kingdom of Dokapon, and the King has offered his throne and the hand of his daughter to any challenger who would rise to the occasion and save the land.