With assured storytelling, great combat, and imaginative design, DmC: Devil May Cry is a more-than-worthy reboot for a classic franchise.

There's a point in DmC: Devil May Cry where everything just falls into place, a point where--after being mollycoddled through hours of gentle combat--you're finally let off the leash. And at that point, chaos ensues. The gates of hell are opened, once-timid demons become tremendous horrors, and Dante transforms into a fighter of glowing theatrics and tense technical wizardry. Immense, over-the-top combos flow from the fingertips, unleashing all manner of visually enticing carnage with a precise, fluid feel. So entertaining is the combat, in fact, that it's easy to overlook what a wonderful achievement DmC is as a whole.

But to do so would do the game a great disservice. The story, for instance, is light-years ahead of previous games in the series. Where they were schlocky, B-movie tales of adolescent fantasy, DmC has a sense of restraint, and maturity. Not that it's entirely evident from the off. A slew of half-naked bodies and raucous rock music make for a less-than-enticing introduction to the new, modern-day Dante's world, where he lives the playboy lifestyle of booze, nonstop parties, and sleazy sex. It's only with the arrival of the hardened psychic Kat and the emergence of a frightening demon horde that Dante, and the story, begins to grow up.

What follows is a tale of evil, world domination, and love that weaves in touches of conspiracy theory and religious dogma to great effect. There's no denying that there's still a drop of Devil May Cry lunacy to it all, particularly in Dante's cheesy quips, but underneath that over-the-top exterior lies heart. There are real moments of drama and excitement that are coupled with some well-realised characters that walk a fine line between good and evil. It helps that they're backed by a terrific voice cast--especially the truly frightening villain Mundis--that delivers even the maddest of dialogue with the utmost sincerity.

DmC's greater focus on storytelling comes at expense of some freedom, but the game is no worse off for it. Gone is the tedious backtracking and repetition of Devil May Cry 4, replaced with an adventure that--for the most part--propels you forward at a breakneck pace. One moment you're escaping a blood-red city that's folding and crumbling around you, and the next you're infiltrating the offices of a famed TV network where the earthly world and that of Limbo have collided in an explosion of vicious demons and ghastly black ooze that drips from every wall.

Such is the variety in your adventure that it does an admirable job of glossing over the linear nature of the story. It helps, of course, that the action is exciting too. Dante is a man with some impressive physical skills that are augmented by an equally impressive range of deadly weaponry. Initially that weaponry takes the form of Rebellion, a sword with a medium speed and attack range that serves as the bedrock for combos.

With just a few taps it's easy to perform simple combos that cut a sharp path through enemies and launch them into the air where you can deal more damage before they explode into a wonderfully satisfying mess of gory blobs. It's not long before you reach the limits of what you can do with a single weapon, though, which makes the time it takes to gather new ones a tad grating. Still, once the game finally lets you loose with a bigger arsenal, the combat takes a rewarding turn. What opens up before you is a vast set of moves that can be smoothly chained together for some technically impressive and oh-so-gorgeous-looking combos.

The combat is done in a way that cleverly plays to the strengths of each weapon, and that of your opponents' weapons. For instance, lighter, angelic weapons like the Osiris scythe are geared towards juggling enemies in the air and dealing spinning swipes that take out large groups all at once. Heavier, demonic weapons like the Arbiter axe focus on all-out strength, pummelling demons into the ground with a hefty brute force, albeit at the expense of attack speed. Combine the two, and you can knock out enemies with the swifter, lighter weapon before neatly finishing them off with a deadly demonic blow.

As you gain more-advanced weapons and abilities, the combos that are open to you become more complex. Chains that let you pull yourself towards enemies, or pull them towards you, result in some explosive combos that see Dante zipping elegantly between enemies, dealing out brutal punishment between each throw of a chain. Then there are Dante's guns, Ebony and Ivory, which are ideal for dishing out short, sharp bursts of bullets and filling in the gaps between other attacks. Combine your moves, and the combat turns into a harmonious ballet of sword slicing, swinging, and all-out carnage that's not only impressive to look at, but delightful to perform too.

It's a fluid system that's easy to get to grips with. There's a trick to the timing that only practice can perfect, but the barrier to entry is low enough that even newcomers to the genre can dish out some tasty moves. And if you really want to get cocky, there are various moves that can be cancelled midway through their animations for chaining together even larger and deadlier combos. The neatly animated and gruesomely designed enemies add a level of complexity too. Some, such as eerie walking skeletons, are armed with shields that can be broken only with heavy weaponry, while others, like vicious blue mutant dogs, can be damaged only by your lighter, angelic scythe.

And there are others, like decrepit cherubs that hover in the air, that are ready to be pulled down to earth with a mighty whip of a chain, and huge, heavily armoured behemoths that can be destroyed only from a certain angle of weakness. Such variety means you can't simply sit back and hammer buttons to win; you have to make use of your brain as well as your thumbs to succeed. That alone makes for combat that's far more engaging than a run-of-the-mill hack-and-slasher. Plus, if you really want to spice things up, you can use Dante's stylish devil trigger ability to freeze enemies and take out a whole group of them in one huge combo.

The reward for all your hard work, aside from the visual payoff, are souls. Souls can be used to upgrade Dante's abilities and weapons, giving you new moves and increased power to play with. Indeed, there are quite a few moves, including Dante's famous Rainmaker, that are essential purchases for combo chasers. Upgrades that increase your power make some of the tougher enemies--particularly those towards the end of the game--a little easier to deal with. There's also the requisite Devil May Cry scoring system, which remains largely unchanged: the longer and less repetitive the combo is, the more points you get and the higher your rating.

Being awarded with, say, an A rating over a D rating is your primary incentive for perfecting your attacks, and striving for such perfection is compelling. That's down in part to the fact that the combat is so fun in the first place, and partly down to the end-of-level totals that let you see just how poorly (or brilliantly) you performed overall. And because everything is so well put together, you know that the shameful D is due to your own lack of skill, rather than any failure on the game's part.

Unfortunately, for all the greatness of the combat system, the boss battles are a big disappointment. It's not that they're inherently bad so much as that they're formulaic and, well, old. The fights follow the usual formula of learning each boss's repetitive movements, and then identifying key moments to launch an attack. All that time spent perfecting your combos and technique is simply of no use against them; you have to follow the plan or you die. They are at least a visually striking bunch, with the gruesomely bulbous and foul-mouthed Succubus being a particular standout.

The game peters out towards the end, both in its narrative and in its combat. The story takes a twist you can see coming a mile off, while later levels eschew combat for laborious platforming sections that don't live up to the excitement and action of what came before. Things fare a little better for completionists, who can check out the many trapped souls scattered in hard-to-reach places around each level, as well as the unlockable rooms that are filled with fun and sometimes very difficult challenges for you to complete. Those include trying to defeat a whole room of enemies without being hit, or platforming down a tricky obstacle course.

The great completionists, and indeed anyone up for a serious challenge, are catered to with a whole raft of different difficulty levels that are unlocked after you complete the game. You can, for instance, play levels with more-powerful enemies that come in different waves to the standard campaign. Or you can play a mode where every enemy dies with one hit, along with Dante. Or if you've really got it in for your own sanity, you can play a mode with the most difficult, hardcore, no-mercy enemies where it's game over after a single hit. Such is the joy of DmC's combat that even if you're not quite skilled enough to make it through those hardcore levels unscathed, it's still a lot of fun to try. And in those moments when the combo system clicks and you enter that Zen-like state of Matrix realisation to perform an epic SS-rated combo, little can raise a bigger smile or give you such a feeling of achievement.

DmC succeeds both in its story and in its brilliant combat, and it looks the business too, despite a few minor glitches and the more colour-soaked levels looking like they've spent a little too much time in an Instagram filter. Sure, you may baulk at Dante's trendy new haircut, or maybe even miss a little of that B-movie Devil May Cry insanity, but the heart of what makes the series so enticing and so much fun to play holds true here. DmC pulls off that unlikely reboot trick of feeling fresh and inviting while still holding onto what made the original series so appealing and so special. There's no point in looking back: Dante has got a brand-new future in front of him, and if DmC: Devil May Cry is anything to go by, it's going to be a great one. 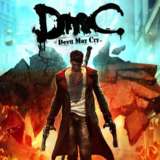 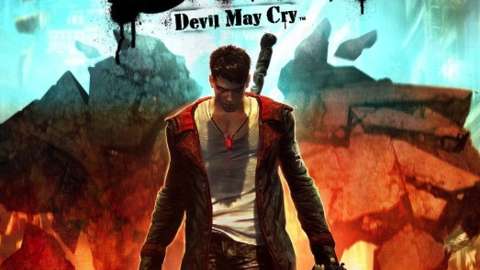 DMC is the next installment in the gothic Devil May Cry series, featuring a short-coiffed, fully aggressive Dante.