Divekick's single-player game is lacking, but this two-button brawler turns into feet-flying fun with friends.

You are likely to have a multitude of questions going into Divekick. Can a fighting game with two buttons be fun and competitive? Does simplicity of control remove elements of strategy? Do basic-looking visuals impede enjoyment of a game? Is it even possible to fight wearing shoes on your hands? These are things that you should be concerned about (well, maybe not the last one so much), but once you give Divekick a go, you'll discover a fun and funny fighter that succeeds in distilling the genre down to its fundamentals and that isn't afraid to laugh at itself.

Divekick, as the name implies, is a game centered on a staple attack of 2D fighting games: the downward aerial kick. In fact, divekicks are the only attacks available in the game. Only two buttons are used: one for jumping and another for kicking downward after jumping (or hopping backward if you're on the ground). There is no motion forward or backward beyond the jumps, kicks, and dodges; positioning is determined by how high you jump, when (or if) you kick, or if you dodge back (and/or kick out of the hop). A few characters have some special skills and unique attack properties that allow subversions of this basic "divekicks only" rule, but for the most part, your motion is controlled with very careful button presses and angle judgments. One hit from any attack means instant loss of that round; the life bars are strictly for show.

The simple controls and one-hit kills make Divekick an easy game to jump into (pun semi-intended) but there is substantially more complexity than the control layout initially suggests. Every character's jump and divekick have different properties, allowing movement around the arena in different ways. While some characters have just a basic angled strike, others have unique attacks, such as leaving behind a trail of damaging lightning or altering their "flight" pattern mid-strike. Like many other fighting games, Divekick features a meter that fills as characters attack.

When the meter is sufficiently full, you press both buttons for character-specific skills, ranging from hovering to creating movement-impeding obstacles to pausing the action to run down the timer. When the meter fills completely, characters activate a supercharged "kick factor" that greatly ups their speed and air time for a few brief seconds. Though everyone shares the same two-button controls, each character is unique, and some pre-match customization to augment their diving, kicking, or meter-building skills gives you a surprising number of options to find and enjoy your favorite character and play style.

Part of what makes Divekick so appealing is its outlandish characters. The cast of Divekick is a motley crew of fighting game parodies and jabs at famous characters. Dive and Kick are twin brothers (of completely different racial makeup) with similar but distinct styles, but other characters aren't quite as subdued in design: the Baz is an old-school fighting game reject with bad makeup and literal lightning legs, Uncle Sensei is a down-on-his-luck divekicking teacher with four pairs of boots on his limbs, Markman is a fast-talking salesman who looks like a well-known real-life peddler of joysticks, and Stream is the blubbering personification of the anonymous Internet troll. Each character's gameplay quirks can be unusual and amusing, as well: Jefailey is an egomaniac whose head gets bigger with each win, allowing for higher jumps but also making him a bigger target for meter-draining headshots with each round.

While Divekick is filled to the brim with in-jokes and references to the overall fighting game scene--a lot of which might be lost on players not familiar with the scene's personalities and drama--the sheer goofy weirdness of characters like the villainous Mr. N is enough to put a smile on anyone's face. It's hard not to at least giggle mid-match as neck pillows get smashed and disqualifications are screamed. Lose all your matches without a single win, and you're "rewarded" with a stamp over your character portrait certifying you as a fraud while the opponent taunts you.

But this emphasis on humor also leads into one of the biggest disappointments of Divekick: the lackluster single-player mode. The only solo mode available is Story mode, which follows a character you pick through a unique narrative and ending. With characters as amusing as these, you'll want to see them engage and interact with each other frequently. It's a letdown, then, when all you wind up with are some simplistic motion-comic-style intros and endings and a few brief dialogue snippets in character-specific matches--but nothing like match-specific win quotes. There aren't any additional single-player elements such as challenge modes or tutorial modes, either. (It seems silly to ask for a training mode for a two-button game, but in-game primers on how to use more unusual characters like Markman and Stream would have been welcome.) If you are planning to stick to single-player combat, you will grow bored very quickly.

The real joy of Divekick is its competitive multiplayer. Part of what makes the game so good is that the simple controls and speedy pace are inviting to people who might be scared off by the complexity of a "typical" fighting game. It's easy to bring out at parties and gatherings of gamers and non-gamers alike and have them enjoy the competitive mechanics and humorous atmosphere. That doesn't mean it can't be played at a high level, though; if you are familiar with fighting games, your skills carry over into Divekick, since it emphasizes basic fighting game concepts like positioning, resource management, predicting the opponent, and being quick to capitalize on mistakes. Online play is just as fun and frenetic as offline thanks to the superbly designed netcode, which helps reduce the impact of lag. (You can also take advantage of online cross-play between the PS3 and Vita, broadening the base of potential opponents.) Versus matches in Divekick prove to be tense and challenging, like in any good fighting game, but you're a lot more likely to be smiling and laughing afterward regardless of the outcome.

Divekick is proof positive that you can't judge a game by looks or controls alone. Beyond the simplistic graphics and animation and the incredibly basic control scheme lies a delightfully fun fighter that offers plenty of competitive action on or offline. The $9.99 price gives you both the PS3 and Vita versions in the purchase, and once you're kicking it with friends and headshotting your foes like the pros, you'll be glad you made the investment. 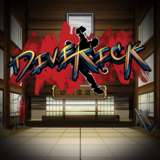 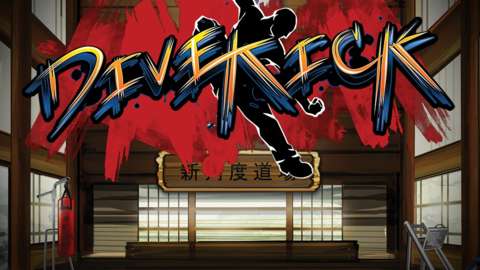 Divekick revolves around two characters, Dive and Kick, where the action is controlled by two buttons, dive and kick.

Teen
Suggestive Themes, Use of Alcohol and Tobacco, Violence