Disney's Tarzan Untamed is a great game for children and perhaps for adults looking for a quick rental, but it's certainly not something you'd induct into your permanent collection.

Tarzan is a friend to the apes--a man who lives peacefully in the jungle along with his wife, Jane, and her father, Professor Porter. One day, their solace is shattered when an evil scientist, Oswald Gardner, comes to the jungle and imprisons all of the baby apes in the name of science. In Disney's Tarzan Untamed for the PlayStation 2, by Ubi Soft, it's up to you to rescue all of the baby apes and destroy Gardner's 75 film reels. What follows are 15 levels of exploration, vine swinging, bungee diving, surfing, and lumberjack wrestling, all wrapped up in a 3D adventure game that is entirely fun but over far too soon.

The levels in Tarzan Untamed are split between jungle and aquatic areas. Each jungle stage holds three imprisoned apes and eight film reels. To save the apes and snag the reels, Tarzan comes stock with a heap of nifty skills. The X button lets you jump or bounce, letting Tarzan grab hold of vines or hop atop hippos. The square and triangle buttons, while rarely used, let you punch or hurl spears at enemies--usually hired goons or venomous reptiles. In a cute twist, the R2 button, in combination with the analog stick, lets Tarzan perform a number of wild tricks, such as handstands and back flips. Approximately one-half of the game's stages occur on water, with Tarzan atop a surfboard or water-skiing behind a hapless vulture. In these areas, there aren't any apes to rescue, but you'll need to perform grinds and trick combinations to grab all the film reels. You need 45 to enter the final three levels and all 75 to see an uncut end sequence.

It's impossible to collect all eight film reels on your first visit to a jungle stage, as some sections are unreachable without additional assistance. Gorillas in each level will help Tarzan reach these areas, but you need to earn their respect first. This is attained by completion of three different gorilla bungee-jumping challenges. Once you complete a challenge, it's a good idea to return to a previous level and hunt down any of the film reels you left behind initially. There's no real penalty for losing an entire stock of lives, so backtracking isn't a terrible pain--though it doesn't make the game any more difficult.

Control problems aren't readily apparent in Disney's Tarzan Untamed. There are a few times when shadows are tough to gauge or when you detach from a vine for no reason, but there's nothing that would make the game impossible for young children or easily frustrated adults. Unfortunately, it only takes a couple of hours to finish the quest mode and a few more to collect all the film reels, which makes the game more suited for a weekend rental than a permanent acquisition. Terk's speed challenges increase replay value a little, as they offer Tarzan the opportunity to learn new tricks, but the utility of revisiting all 15 stages one more time is dubious at best.

Recent history proves that video game players don't mind a shallow quest when a game's visuals are artistic or exhilarating. While Disney's Tarzan Untamed is well detailed and full of lush greenery, the overall texture quality and complexity of most objects is substandard. Nothing was done to give the presentation an overall sense of luster, such as lens flares, blowing leaves, wave motion, or other similarly nice details. This isn't to say that Tarzan Untamed is ugly, but encounters with shimmering waterfalls or expansive treetop tube systems are painfully infrequent for a game that's trying its best to make the jungle seem majestic.

All in all, Disney's Tarzan Untamed is a great game for children and perhaps for adults looking for a quick rental, but it's certainly not something you'd induct into your permanent collection. Rayman 2, Klonoa 2, and Jak and Daxter are all members of the same genre as Tarzan Untamed--adventure--and each does the two things Tarzan Untamed fails to do: impress visually and last beyond a weekend. 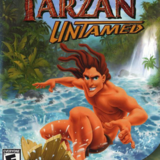