On the Game Boy Advance, Disney's Meet the Robinsons is a straightforward action game that's clearly aimed at younger players.

Ever since the Nintendo DS came on the scene, it seems like the Game Boy Advance has become a dumping ground for simple, cheaply produced games geared toward young children. Disney's Meet the Robinsons continues the trend. In each of the game's 20 individual missions, you go through a side-scrolling or top-view stage and collect parts for different inventions while shooting at the same carbon-copy enemies and solving the same push-block puzzles over and over again. The straightforward level designs and repetitive tasks are certainly appropriate for kids, and the game might even hold a young child's attention for a couple of hours. But if you're any older than that, you're quickly going to find yourself bored and will probably succumb to the urge to shut the system off after only a few minutes of playing.

Unlike the console games of Disney's Meet the Robinsons, which took place in parallel with the movie, the GBA game actually picks up where the movie left off. Wilbur has returned to the future and finds that his town has been overrun by thousands of copies of Doris, the evil robot bowler hat that he and Lewis supposedly defeated in the movie. So, Wilbur travels back in time and recruits Lewis to help him exterminate the Doris clones that are causing mayhem in various locations in the past and future. Throughout the game, you control both Wilbur and Lewis in three distinct types of stages. Wilbur's missions are traditional side-scrolling stages that involve the standard mix of running, jumping, and shooting. By contrast, Lewis' missions are viewed from a top-down perspective and involve puzzle-oriented tasks, such as pushing blocks and activating switches. You'll also periodically get to pilot the time machine in shoot-'em-up stages that, similar to Gradius or R-Type, involve shooting down flying enemies and dodging hazards while the screen continually scrolls. To get through the majority of stages, you typically have to find the blueprint for a new gadget, collect the parts necessary to build that gadget, and then destroy a certain number of Doris hats. Some stages end with a confrontation between you and a larger rendition of Doris that's been tricked out with appendages and weapons.

Despite offering three different types of stages, the game as a whole lacks variety and exudes the sort of simplicity that makes it obvious it was specifically developed for young children or very inexperienced players. With a few random exceptions, nearly all of the enemies in the game are small or large renditions of the same bowler hat. The message there is: "If it's a bowler hat, shoot it! If it's not a bowler hat, grab it!" You can build and use a dozen different gadgets, but the result from all of them is that you can shoot further, jump higher, and generally accomplish better variations of the same tasks you're already able to do in the first place. Stage layouts are straightforward and rarely offer a challenge. Apart from shooting bowler hats, you'll occasionally have to jump over a pit or move a block out of your way. You'll feel only remotely frustrated when you're supposed to track down an item or a switch that's invisible, which is never a big problem because you'll eventually find the appropriate hot spot just by walking over every inch of ground. Therefore, it's tough to get lost when annoying pop-up dialogue boxes are constantly appearing to tell you how many parts you still need to find or where to go next, even during later missions when you already have a handle on how to play the game. While you're going through the game, you have the option of seeking out bonus items that unlock minigames and artwork. However, doing so doesn't vary the quest or make it more interesting. It just means you'll spend more time pushing blocks around and shooting bowler hats.

Likewise, the graphics and audio toe the line between intentionally simple and hastily slapped together. The still frame cutaways that appear between missions are the only unequivocally snazzy aspect of the presentation, showing Wilbur and the other characters reacting to the events of each mission. Everything else is plain by comparison. The backdrops employ multiple layers that convey a nice sense of depth, and they vaguely mimic the movie's art style, but the same tiles and structures are constantly recycled, and there's rarely anything moving in the background aside from the occasional spark of electricity. Wilbur and Lewis are large and closely resemble their movie counterparts, but their movements are jerky. Meanwhile, Doris and the other objects in the game are crudely drawn and barely animate. Watching a bowler hat hurl a bolt of electricity at you certainly doesn't induce tension when the hat just floats there and the bolt of electricity flip-flops its way toward you, alternating between the same two frames of animation. As for the audio, every stage in the game has its own individual piece of music, but each piece is limited to a simple beat or melody that loops every few seconds. You'll also hear every cheesy laser sound effect and popping noise by the time you reach the third mission.

Basically, if you're old enough to read this, you're probably too old to enjoy the GBA version of Disney's Meet the Robinsons. For better or worse, its simplistic stages and bland visuals are geared toward school-age children who haven't yet graduated to the kinds of video games made for mass audiences. 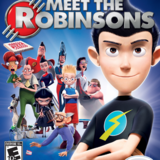 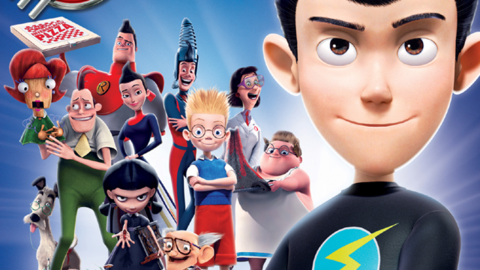 Based on the Walt Disney Pictures animated film of the same name, Disney's Meet the Robinsons is an action adventure game that lets you go back in time.