It's widely accepted that Activision's Tony Hawk's Pro Skater series is the way to go if you're interested in playing a skateboarding game on the Game Boy Advance. After three successful releases, and with a fourth on the way, the series shows no signs of slowing down. It makes perfect sense, then, that Activision would employ Vicarious Visions, the development house responsible for the handheld versions of Tony Hawk's Pro Skater, to develop its Disney-themed skateboarding game: Disney's Extreme Skate Adventure. The look and feel of the game suggest that it's just Tony Hawk's Pro Skater with Disney characters and locations. Upon closer inspection, however, the simplifications that have been made to the formula ultimately make the game best suited for novice players.

All of the characters and locations in Disney's Extreme Skate Adventure have been taken from three wildly popular Disney franchises: The Lion King, Tarzan, and Toy Story. There are seven different characters from which to choose, including Nala and Simba from The Lion King; Tarzan and Terk from Tarzan; and Buzz, Woody, and Jessie from Toy Story. Like in the recent Tony Hawk's Pro Skater 4, the main goal in Disney's Extreme Skate Adventure is to perform favors for the bystanders in each level. As you hunt down their lost items and complete the challenges they assign, you'll unlock new levels, tougher runs, and more tricks for the character you've chosen.

For better or worse, Disney's Extreme Skate Adventure plays like a light version of Tony Hawk's Pro Skater 4. The most obvious change concerns the control system. In the Tony Hawk games, there are separate buttons for flips, grabs, and transitions, like manuals and reverts. In Extreme Skate Adventure, every major trick, grind, and transition is performed with the B button. That makes combinations easier to chain together, but it sharply limits the number of unique tricks each character can perform. Likewise, the objectives in Disney's Extreme Skate Adventure aren't as difficult as those you'd find in traditional extreme sports games. You can use combo tricks and wall rides to reach higher spots in each area, but none of the challenges actually require you to perform any of these advanced techniques.

The game is pretty short as well. Each movie has two different locations in which to skate, for a total of six different parks. To unlock all of the tricks for the character you choose, you need to complete three runs in each park and engage in a boss fight at the end. Most players--even those who are too young to earn a paycheck--will finish the adventure mode in a day or two. After you finish the adventure mode, you have the option to participate in a series of time challenges for each stage, or you can play a game of "alien" against a friend. You don't need to join together two GBAs to participate in this two-player mode. Instead, you pass the GBA back and forth, and you take turns trying to earn the most points by performing a trick combination. The player with the most points earns a letter from the word "alien." Much like in the game of "horse" in basketball, the first to complete the word is the winner.

As far as graphics and audio are concerned, Disney's Extreme Skate Adventure isn't as realistic or technically ambitious as any of the previous Tony Hawk's Pro Skater games. The isometric perspective gives a 3D look to everything, but the environments aren't colorful or detailed enough to really jump out at you. A construction level in one of the Tony Hawk games would have forklifts, loaders, and tiny buildings scattered around for you to interact with. By contrast, the jungle level in the Tarzan portion of Disney's Extreme Skate Adventure simply has a few ramps and rails--and a ton of dirt and grass. The characters look stiff and out of place on their makeshift skateboards, but the animation for all of the various tricks and transitions is pretty smooth. Kids will especially get a kick out of the way that Simba literally frolics while he grinds across rails and performs flips off ramps. The background music for each level is reminiscent of the movies associated with the game. Unfortunately, however, the sound effects are terribly generic. Each character does emit a unique groan when he or she takes a spill. The rest of the dozen or so sound effects have been lifted from previous Tony Hawk's Pro Skater games.

As is true of the PlayStation 2, Xbox, and GameCube versions of Disney's Extreme Skate Adventure, the GBA version is good for young players or Disney fans who also enjoy skateboarding games. Fans of the Tony Hawk series will probably find it too watered-down to hold their attention for a worthwhile amount of time. 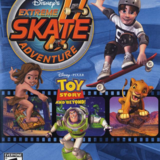