There are flashes of Disney's magic in several aspects of Nasira's Revenge, but it isn't enough to overcome the game's technical shortcomings.

From Donald Duck to Mickey Mouse to Tarzan, Disney's characters have been gracing the pixelated world of video games for years now. With every new Disney animated movie comes a rush of video games on all the consoles. Aladdin in Nasira's Revenge never had the distinction of appearing in theaters, but that hasn't stopped Disney Interactive from basing an entire 3D platformer on it.

Aladdin may have vanquished the sinister Jafar in his last adventure, but that hasn't stopped Jafar's evil twin sister, Nasira, from seeking revenge. Nasira kicks off her vengeful plot by hypnotizing the palace guards and kidnapping Princess Jasmine and the Sultan. Nasira believes that if she collects a set of ancient relics, she might be able to revive Jafar. Nasira uses her captives to manipulate Aladdin into doing the relic collecting for her. Unknowingly, Aladdin takes up the task of rescuing Jasmine and the Sultan.

Like most 3D platformers, Nasira's Revenge has plenty of jumping, attacking, and butt-stomping. Beyond that, Aladdin also swings on ropes, throws apples from a first-person view, and slides down wires. As for the controls, they're erratic--it's often annoyingly difficult to make the easiest of platform jumps, and judging the distance to the hanging ropes can also prove to be a challenge. The sluggish camera compounds problems further, making navigating simple areas a chore at times. Throughout the course of the game, you take control of Aladdin's monkey friend, Abu, as well as Princess Jasmine. Abu lacks any offensive attacks but may double-jump off walls to reach high areas. Jasmine hides in a huge vase and stealthily navigates the level Solid Snake style. With just a few moves to learn per character, Nasira's Revenge doesn't have the gameplay depth of high-tier 3D platforming games. The moves that are included are awkward to perform or are implemented poorly.

As Aladdin proceeds through the game's 10 levels, the majority of the gameplay consists of collecting a variety of coins, flipping switches, and obtaining items through moronic tasks, like shooting still birds off a wire. Nasira's Revenge is made for children, and it's evident by the game's lack of difficulty. An average player will be able to polish off this game in just one sitting. Younger players, whom the game is designed for, will likely be put off by the control problems mentioned earlier. Another aspect of Nasira's Revenge that will not appeal to younger players is the lack of story development. Real-time cinemas show up far too infrequently to keep a young player's interest. You'll often go several levels before any shifts in the plot occur. Thankfully, there's a handful of boss fights and minigames to play--they help break up the platforming elements. One minigame has Princess Jasmine riding a skateboard while another asks you to knock down as many targets as possible within a given time limit. Collecting genie coins rewards you with slot machine pulls at the end of the level.

Nasira's Revenge has a nice look, but it's marred by graphical glitches. The texture variety, clarity, and detail are impressive, but they tend to jiggle around on the polygons, making the visuals seem like they have a nervous disorder. The draw-in distance barely reaches 30 virtual feet, and the pop-up is masked with dense black fog. Other common graphical issues, like polygon tearing and clipping, occur regularly. Glitches include falling through platforms into a digital abyss, as well as textures that sometimes fail to appear, leaving blank white spots in their place. As is the case with most games based on a license, the visual emphasis has been placed squarely on the characters. Their animation is particularly impressive--Aladdin will hold out his arms for balance while walking on thin ledges, and he'll whip his legs while swinging from ropes to gain momentum. The emotional expression achieved by the character animation looks like it could be the product of one of Disney's artists. Despite some problems, Nasira's Revenge still looks sharp the majority of the time. The colors are bright, the frame rate is usually solid, and the animation is of Disney quality.

In general, the voice acting is excellent, and again, I wouldn't be surprised if the talent came from within Disney's ranks. It's disappointing that Robin Williams ditched his gig as the voice of the genie, but Gilbert Godfried has returned to play the obnoxious parrot. The repetitive Arabian music is pulled directly from the Aladdin films, so it rarely becomes offensive. There are some auditory glitches in our boxed copy, including several songs that either skip or begin playing in reverse.

There are flashes of Disney's magic in several aspects of Nasira's Revenge, but it isn't enough to overcome the game's technical shortcomings. Adults will find it far too easy, and kids will bemoan its torpid controls. Nasira's Revenge does succeed at being fun at times, but the game ends right around the time it begins. If you're looking for a one-day pacifier for the kids, give Nasira's Revenge a rent. Experienced players should leave this one to gather dust in the discount bins. 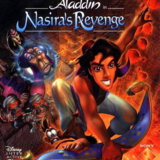