Disney Universe isn't much of a Disney product--nor much of a game, either.

Disney Universe closes with a pop-rock rendition of the famous "It's a Small World." It's a Disney tune, but it isn't delivered in a particularly charming manner, making this performance a fitting end to a Disney-themed game bereft of the idealism that characterizes the worlds it represents. In this action/platforming/puzzle hybrid, you and up to three friends leap and whack your way through dozens of levels based on popular Disney films. Six films are represented: Aladdin, Alice in Wonderland, The Lion King, Pirates of the Caribbean, Monsters, Inc., and WALL-E. But if you were expecting the worlds to properly represent the atmosphere of these films, you'll be saddened to learn that Disney Universe wears its inspiration very lightly. Nor does it make up for its wan portrayal of Disney licenses with consistently enjoyable gameplay. There are morsels of joy here, but they're sprinkled sparsely throughout and are incapable of overwhelming the pervasive taste of boredom.

In Disney Universe, you are a nondescript little gremlin with a penchant for Disney costumes. Before you enter a world, you choose a look: Donald Duck, Jasmine, Tinkerbell, or some other Disney character. Over time, you unlock an entire stable of costumes, though you must purchase them using coins the game liberally showers you with. Once clad in the outfit of your choice, you and up to three others are swept into the world of your choosing, starting with the Pirates of the Caribbean world. (Additional worlds, like costumes, must be bought.) Once there, your goal is to move from one level to the next by solving puzzles, mashing the buttons on your controller, facing bosses, and rescuing the dressed-up gremlins held captive.

The formula is vaguely reminiscent of the popular Lego film tie-ins, though without the witty storytelling, evocative art style, and overall quality of those games. While you must occasionally exercise your noggin to figure out how to proceed, the game generally shows you what you must do at any given time--though to be fair, you can turn off guidance arrows if you want to involve a few more brain cells. Either way, most levels have a predictable rhythm: move some objects around, fight off some enemies, possibly participate in an optional minigame, and enter a portal to the next area. And unfortunately none of these tasks are much fun, particularly if you play on your own. Pushing cannons and ferrying stopwatches around don't make for compelling entertainment on their own terms, and your "reward" for accomplishing these tasks is, in many cases, the arrival of little black fiends that you beat up on.

These fiends are sneaky devils. They pick up and move around puzzle objects that you have dropped into place, hop on and ride any animals that might roam the level, and drop spike traps that cause your happy-go-lucky avatar to go stiff as a board and fall to the floor. These are nice touches that make your enemies seem like cunning creatures rather than sword fodder. Unfortunately, it isn't fulfilling to bash them into oblivion. Despite their efforts, you can cut through most of the little fiends easily. Every so often, however, a larger beast with an inflated health bar appears, pounding the ground or twirling about like a cyclone to enhance the challenge. But rather than adding substance to the combat, such enemies are usually just frustrating. It's inordinately difficult to outrun one of those spinning foes, for example. You are sometimes prompted to perform a counterattack or avoidance maneuver, but when you're mashing the attack button, the prompt doesn't give you enough time to react. There's little penalty for dying--you just drop some coins and respawn for another go. The uncomfortable dichotomy of easy and frustrating will probably turn off Disney fans of all ages, but particularly the younger audience at which the game is clearly aimed.

The weakest levels--and the most numerous--are those that follow the basic "move stuff, kill stuff, win" template. A few, however, hint at untapped potential. A Lion King scene in which you flee an oncoming wall of flames is structured like an old-fashioned left-to-right platformer, and it has a sense of urgency that makes it one of the game's better moments. The Monsters, Inc. world has you catching rides on moving doors and trotting about on ceilings, both of which lead to some amusing hijinks. Other attempts at gameplay diversity, such as on-rails shooting sections and flipping switches to guide a ball down a twisty ramp, are tedious because they last longer than they should. Adding a friend to the mix can enliven things, if it's just one. Having four players, on the other hand, turns any shallow entertainment you might have been experiencing into an anarchic mess.

To the developer's credit, playing with others introduces mechanics specific to cooperative play, such as power-ups that turn you into a ground-slamming basketball. Puzzles, too, are tweaked to require the input of additional players. For example, on your own, activating a button may give you a limited amount of time to jump across a series of rafts. With a friend, one player must remain on the button so that another can perform the leaps. But with a full party, there's so much visual feedback that you can't tell what's going on. Enemies cavort everywhere, gold flies about, lasers cross the ground, sparks fly, bombs explode, and objectives and tooltips pop up--it's all way too much. Some power-ups are intended to cause grief to your teammates, which can be a bit of evil fun. But all too often, the grief is inadvertent, as players wave their weapons about, hitting each other in all the madness rather than the enemies they're trying to banish. Minigame challenges also occasionally suffer due to overstimulation, though more often, they're brought down by repetition. They are mostly variations on the same few themes: beat stuff up, collect stuff, or avoid falling stuff. The lack of creativity leads to monotony, making these optional challenges something to avoid rather than seek out.

Disney Universe is bound to elicit comparisons to the Kingdom Hearts games--not because they play similarly, but because they draw from Disney source material. Additionally, the enemies bear more than a passing resemblance to the foes in Kingdom Hearts, known as the heartless. Unfortunately, such an obvious nod to another series emphasizes Disney Universe's halfhearted use of beloved licenses. The visuals are fine if undistinguished and are based on the game's concept: you inhabit a computerized version of familiar universes, corrupted by those little villains that pop up on your travels. Some backdrops have a pleasant saturated glow, and a few levels--the Alice in Wonderland ones in particular--nicely represent their worlds. But the distinctive looks of the Disney films don't always translate well to Disney Universe's art, which is neither very "Disney," nor very stylish on its own terms. (As opposed to, say, the Lego games' immediately recognizable flair, or Little Big Planet's homemade arts-and-crafts look.) Authentic performances of iconic tunes from those films would have helped, but the computerized versions don't have the charisma of the originals. The idea behind the presentation isn't bad; it's that the result is an odd middle ground between "Disney" and "generic animated TV show."

Disney Universe's greatest problems really aren't in the presentation, but in the mundane gameplay that has you performing the same basic tasks in differently skinned levels. No one element is satisfying in itself, nor do the pieces come together to make for an interesting whole. Instead, the game is a collection of basic mechanics with a single hook: the license. And because that hook isn't executed all that well, the rest is left to flounder. Disney Universe occasionally rises above the bare necessities. But if you were hoping for a lighthearted adventure, you should keep wishing upon that star. 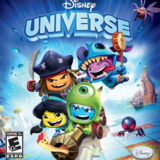