This family-friendly trivia game is fun while it lasts, but its mostly easy questions are repeated far too frequently.

If you've spent any amount of time in the board game section at any department store, chances are you've seen at least one edition of Scene It. From Harry Potter to James Bond, the Scene It DVD game series has taken on just about every franchise or studio you can think of--including Disney, which is unfortunate for Disney Think Fast. Other than some motion controls and a charming Disney atmosphere, Disney Think Fast offers nothing better than what you would get with the Disney Edition of Scene It. Still, if you have a family with young children or you're an absolute Disney fanatic, this bare-bones game show might be a winner.

Disney Think Fast is set up in a game show format. After picking your contestant and Disney-movie-themed stage, you're whisked away by the show's host, Genie from Aladdin. Up to four players compete in a series of trivia games based on Disney animation. Unfortunately, none of the Pixar movies makes an appearance, but everything from Snow White to Lilo & Stitch does, so there are still a lot of movies to pull from. The default setting assumes you have a moderate amount of Disney animation knowledge, though that can be changed to better suit your Disney experience in a custom game. At the end of a few rounds, the scores are totaled, a winner is declared, and the credits roll. Other than a few unlockable characters and some items to dress up your contestant, that's about it. You can get in at least a handful of games before the questions start to repeat.

If you've played other movie-themed trivia games you'll almost certianly recognize many of the game types found in Disney Think Fast. These include an observation game that shows you a clip from a Disney movie and questions you on random elements from the clip, a sketch game that draws a character and asks you to identify it before the timer runs out, true-or-false and general trivia questions, and a few other variations of these. The best of the bunch are the genre-specific questions (heroes and villains, sidekicks, songs, and the like) and the guest questions. The guest questions depend on the location: if you're playing under the sea, for instance, Sebastian will come in and ask you questions about The Little Mermaid. In addition to Disney animation questions, there are some general knowledge questions, most of which are extremely easy, such as this gem: "Which is more useful in the rain? An umbrella or a balloon?" The simple questions make Disney Think Fast a good game for young children, though perhaps they'll lose interest when the questions start being repeated.

This being a game show, the controls are appropriately simple. Most answers are displayed in one of four directions, and you can use either the D pad or a flick of the Wii Remote to select them. Using the motion controls works OK, but the D pad is more reliable. There are some instances where the game interprets your flick incorrectly, especially if you're making a broad gesture.

Disney Think Fast nails the charming Disney atmosphere in the presentation. The characters all look and animate fluidly, the genie in particular. Each environment represents a different movie and era in Disney animation. Whether it's the hard lines of 101 Dalmatians or the smooth pastels of Lilo & Stitch, each environment evokes the appropriate style. The games feature plenty of sparkly effects and high-quality videos and pictures. The sound is full of cheerful music, with the occasional recognizable tune played during a game. When you're navigating menus, an announcer reads options to you, but a sound glitch will occasionally pop up and cause him to get stuck in an endless loop, which can be grating when you're trying to set up a game. The genie spits out a number of humorous one-liners during the game, but they repeat quite often, and start to get stale after a few rounds. The contestants aren't too chatty, but they pipe in when necessary and their voice samples sound great, so you can expect to hear an authentic Donald Duck tantrum when you lose.

There isn't much to do in Disney Think Fast, especially if you don't have people to play with, as there isn't an option to play against the computer. The solo game will let you unlock more characters, but the games and questions repeat too often to make it worth playing for long. If you or your children have an unquenchable thirst for all things Disney, there's some fun to be had here; everyone else should look elsewhere for their trivia fix. 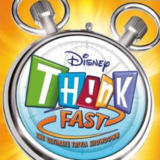 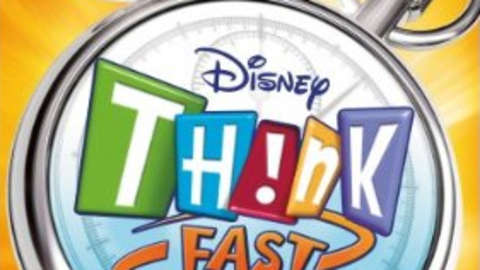 Disney Think Fast is a Disney-themed quiz game that will test your mental and physical reflexes.