Konami has fashioned a fun game with a good amount of replay value, even if you have to play as Mickey and Minnie instead of Kobe Bryant and Shaq.

There aren't many basketball games available for the Game Boy Advance. Even so, it's still quite a surprise to find that Disney Sports: Basketball is the best of the lot. Once you get used to seeing Mickey, Donald, and the usual cast of Disney characters dribbling up the court and dunking on each other, however, you'll realize that you're playing a very good rendition of two-on-two basketball.

The reason the game succeeds is it balances the fundamental mechanics of basketball with the kinds of trick shots and flashy moves that make video games enjoyable in the first place. Disney Sports: Basketball lets you create your own team of two players and send them against other teams in full-court matches with quarters that are two minutes in length. It's easy to run the court, swap between your players, and take shots, but it's also just as effortless to set up alley-oops, dunks, and crossover moves. Like in real basketball, the referee will make calls for out of bounds and for fouls, which can help or hurt you depending on the overall score and how much time is left on the clock. One really nice detail is the fact that you can plant your feet and force the offense to revolve around you, which is exactly how it's done in the NBA.

Disney Sports: Basketball also has a number of arcade-style enhancements that liven up the action on the court. As the time left on the clock depletes, you can earn bonus points for every successful basket. As you make your way through the tournament and training modes, you'll unlock power-up items that you can assign to players before each game. There are 25 such items in all, and you can use them when your magic meter is filled to do things like put up turbocharged layups, barrel through opponents, or nail perfect three-pointers. When you finish a game, regardless of whether you win or lose, you'll gain experience points that you can use to improve human-controlled characters. You can earn these points in the training mode as well, which is a welcome touch since the CPU tends to play a solid game in the other modes.

The game also has a good variety of available modes and hidden secrets. You already know about the 25 power-up items you can unlock, but there are also two secret characters to discover. In terms of play modes, there are exhibition, tutorial, and training options, as well as a tournament mode with three stages of difficulty. The six included basketball-themed minigames offer a nice diversion from the standard modes. They give you a chance to practice one-on-one or two-on-one from an offensive or defensive perspective, as well as participate in free-throw and three-pointer competitions. All these options have support for single-player and multiplayer linked play.

The only areas where Disney Sports: Basketball isn't a slam dunk are its graphics and its audio. The characters are large and smoothly animated, and their reflections on the court are spectacular, but there's absolutely nothing going on in the arenas themselves--the spectators never move a muscle. Thankfully, the game makes good use of little details like instant replays and super dunks to keep the focus locked on the action on the court. Players can shatter the backboard as well. Sadly, the best thing you can say about the audio is that it's not annoying. The game has all the necessary effects to convey the sound of dribbling, shoes squeaking on the court, and shots bouncing off the hoop, but it doesn't have anything in the way of digitized speech or cheering.

Since Acclaim's NBA Jam 2002 is the only other alternative, you pretty much have to get Disney Sports: Basketball if you want to play the best basketball game that's available for the Game Boy Advance. While this is surely a sad commentary on the selection of sports games available for the system, it's not a slight in any way against Disney Sports: Basketball. Konami has fashioned a fun game with a good amount of replay value, even if you have to play as Mickey and Minnie instead of Kobe Bryant and Shaq. 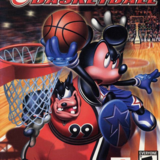 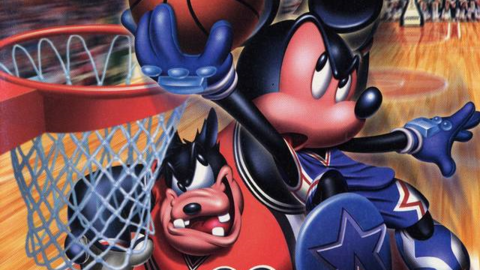 Disney Sports Basketball has no redeeming qualities, and it should be avoided by basketball fans and Disney fans alike.