Though it's disappointing that the developer chose to spin its wheels rather than improve upon its past efforts, Disney Golf still stands up as a worthwhile arcade-inspired golf game.

Released at the US launch of the PlayStation 2, T&E Soft's Swing Away Golf made an outstanding first impression for the sport on the new console, delivering solid golf action and a wealth of gameplay modes. Disney Golf is the first US release from T&E Soft since Swing Away was released in 2000, and while it is essentially a slightly less robust version of Swing Away Golf, it still makes for a capable golf alternative that's suitable for all audiences.

Though Disney Golf does not have the deep career mode found in its spiritual predecessor, the rest of the modes are intact. There's the standard stroke, match, and skins games, just as you'd expect. There's the combination play mode, in which players play as a team, taking alternating shots, and the self-explanatory long-drive and near-pin contests. Finally, there's the challenge mode, the game's only dedicated single-player mode. Here, players face off against another Disney character in a match game. Winning more holes than your opponent will unlock the character you're playing against and the course you're playing on.

There are a total of eight characters and six courses in Disney Golf. The characters are mostly drawn from the immediate Mickey Mouse family, including Donald and Daisy Duck, Minnie Mouse, and Goofy. Oddly, Mickey is not a playable character, instead offering commentary during the game. Each of the six courses included in Disney Golf has its own theme, such as a Western course, a tropical island course, and an ambiguous "American" course, and they're all pretty straightforward, offering little challenge to video golf pros. It would have been nice to have seen the game make better use of the Disney license by including more playable Disney characters and courses with a stronger Disney theme, but what's here is still adequate, regardless.

Though EA Sports has fully embraced the new analog swing mechanic in its Tiger Woods PGA Tour series, Disney Golf sticks with the tried-and-true three-click digital swing system, which still proves to be a satisfactory mechanic. Aside from switching clubs for distance, you can alter the height and angle of your swing, as well as the spin of the ball, in order to produce different kinds of shots. The putting is handled using the same grid system found in Swing Away Golf, and you can also opt to see the theoretical trajectory of your ball. The game throws a little chance into the game in the form of power-ups. Whenever you hit a strong tee shot, place the ball close to the hole, or make any other extraordinary shot, you're rewarded with coins that can be used to purchase a variety of performance-enhancing items. Though the exclusive use of the slightly antiquated digital three-click swing keeps Disney Golf from really comparing to the more-modern golf games, the game's arcade-influenced style of play is still engaging.

The presentation of Disney Golf doesn't improve much upon what we saw in Swing Away Golf, but it's still able to convey a happy-go-lucky attitude. The character models for the different Disney characters look good, but some of the animation is a little rigid, and their textures have an odd, flat look to them. The courses are simple but effective, using plain geometry and nice, clean-looking textures to add to Disney Golf's cartoon-inspired look. The game shows off some blur effects when you execute a power shot, and there are some fancy-looking camera transitions, but the gameplay seems to stall a little during these transitions, detracting from their intended effect. There are also some signs of slowdown during the transitions, but thankfully none of the frame rate problems interfere with the actual gameplay.

The soundtrack in Disney Golf consists of classic Disney themes interpreted by what sounds like a marching band. There's some authentic Disney voice acting thrown in there too, and it all sounds good, though some of it repeats more often than it should, especially Mickey's commentary. But if either the marching band music or the voice acting bothers you, the game offers separate volume controls for each.

T&E Soft appears to have treated Disney Golf as a purely mercenary job, simply injecting some Disney characters into its existing engine. Though it's disappointing that the developer chose to spin its wheels rather than improve upon its past efforts, Disney golf still stands up as a worthwhile arcade-inspired golf game. However, players not smitten with the game's Disney theme may want to hunt down a copy of Swing Away Golf, T&E Soft's previous PlayStation 2 golf game, as it offers much the same experience. 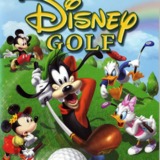 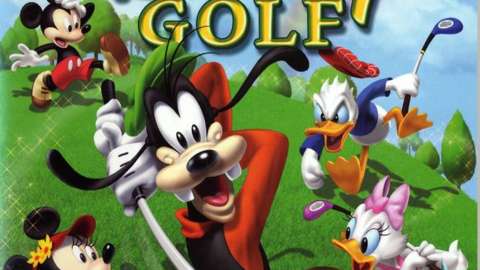 Though it's disappointing that the developer chose to spin its wheels rather than improve upon its past efforts, Disney Golf still stands up as a worthwhile arcade-inspired golf game.