According to the film Fantasia, Mickey Mouse was not much of a sorcerer, but he's always been an enthusiastic conductor, which means that the mouse and I have a few things in common. One of many ways in which Disney Fantasia: Music Evolved differs from the film that inspired it is that it makes me feel both like both a fantastic conductor and a talented wizard, capable of not just manipulating the sounds of the orchestra, but of commanding sea life and city dwellers to do my musical bidding.

To be clear, I've conducted both choirs and orchestras in my (former) life as a violinist and composer, and Fantasia does not replicate what it's truly like to conduct a symphony orchestra. Instead, the game is a flight of fancy, reproducing the furious gesticulations you perform at a stoplight when listening to public radio, or the spontaneous performance art that occurs when your latest favorite jam appears on your shuffled playlist. It resembles other rhythm games in the sense that it displays prompts on the screen in time to music, and you perform the appropriate actions within the necessary time frame. In games like Rock Band, success involves pressing buttons on plastic instruments; in Dance Central, it means performing dance moves and striking poses. In Fantasia, triumph comes from sweeping your arms up and down, and pushing them forward and back. (Needless to say, the game requires you to own a Kinect.) At last, a game has come that gives you permission to sway about in your living room, waving your hands about as if you're a wannabe Leonard Bernstein while Vivaldi's Four Seasons blasts from the speakers.

Fantasia's musical selection does not just include well-known classical tunes--Mozart's Eine Kleine Nachtmusic and Mussorgsky' Night on Bald Mountain among them--but also comes with modern music by way of contemporary hits from artists like Drake and Lorde, along with essentials from The Who, Elton John, Queen, and many others. It's likely you know most of these tunes, whether or not you've been to the symphony or turned on the radio in recent months. When the a capella harmonies of "Bohemian Rhapsody" spill from your television, you naturally understand the attitude you must take, even if you don't know exactly what motions the game will expect of you. It's one of Fantasia's many wonders that those required motions so beautifully complement the melodies and rhythms they accompany. When trumpet fanfares and wailing guitars fill the room, the game calls for dramatic sweeps and swift punches; when plaintive violins and cellos encourage quiet contemplation, your hands swish about in graceful arcs.

If you're like me, you will be more concerned with matching the motions than looking elegant, at least on the first couple of attempts. Fantasia is forgiving in exactly the right ways, however, giving you credit for proper motions whether you perform a grand karate chop or lightly thrust your wrist downward. In time, I was just as concerned with how I transitioned from one move to the next as I was with matching the arrows on the screen. Unless the move calls for both arms, Fantasia typically doesn't care which arm you use, and an enormous part of the fun comes from experimenting with different methods of physically linking one motion with the next. At first, I approached Fantasia like a robot might, flinging my arms up, down, and forward as the game required. Now, many hours later, my arms craft figure-eights in the air and my hands flitter about like butterflies. Well, I might be exaggerating my own sense of grace--but at least it feels as though I have become one with the music, even if my perceived elegance is greater than the elegance an outsider would witness. (And word has it that I can look pretty clumsy while playing Fantasia.)

Fantasia is not just an elaborate game of Simon Says: you actually contribute to the soundscape as you play. Each song comes with three mixes in total (including the original mix), and while playing, you often have the opportunity to incorporate various aspects of those mixes together. You can stick to the original if you prefer, but doing so means you miss the pure joy of hearing a big-band version of Dvorak's New World Symphony. I don't love every mix--some of them are too reminiscent of the cheesy Hooked on Classics series--but for every mix that didn't gel, there were two that had me looking at the music in a new light and finding new ways to perform gestures. The watchtheduck mix of Cee Lo Green's "Forget You" (yes, I wish it were the uncensored version as well), for instance, plays so much with vocals and rhythm that you must renew your focus on the assigned motions lest you fall victim to the mix's abundant musical tricks. Should you play with a friend performing at your side, selecting a tricky mix is a good way to trip her up and earn a higher score.

Mid-performance minigames also grant you control over the music by allowing you to create little melodies or rhythms by, for instance, moving your hand up and down a vertical keyboard of sorts, or by manipulating a ring that adds synthesized effects to a vocal or instrumental line. This aspect of Fantasia is a mixed blessing. On one hand, you can make some fairly random motions and end up adding an attractive musical line to the track; developer Harmonix ingeniously ensures that the notes and sounds you can choose fit within the harmonies and beats of the musical line. On the other hand, the tools' limitations can be frustrating, particularly when you lower your arms to save your melody and unavoidably glide through more notes or hammer on another drum in the process. It's best just to create something that sounds nice and be done with it, rather than to attempt a specific melody or drumline.

When trumpet fanfares and wailing guitars fill the room, the game calls for dramatic sweeps and swift punches; when plaintive violins and cellos encourage quiet contemplation, your hands swish about in graceful arcs.

The tracks are framed by a cute but throwaway story involving you, the wise wizard that cleaned up after Mickey's Fantasia disaster, a young woman named Scout, and a vague aura threatening the universe called "the noise." Given the masterful way Fantasia and its sequel tell their musical tales, it's disappointing that the story is such fluff, though it's fortunately over and done with before you know it. Nonetheless, the Fantasia legacy is not just about the integration of animation and orchestration, but about the fables that integration can share. Fantasia depicted a world of flowers dancing the troika and the hushed prayers of the deeply devout; Fantasia 2000 brought to life the story of the Firebird, whose death and rebirth is echoed in the natural world. I wish Fantasia: Music Evolved's story had mirrored the diverse emotional arcs of the films that came before.

Nevertheless, the game is overflowing with charm, and the success of the story mode is not in the narrative but in the worlds it guides you through. You access songs through interactive portraits of undersea hijinks, arctic floes, and pastoral forests. These worlds are gorgeous playgrounds, letting you produce little melodies and patterns by manipulating creatures and foliage. Where most of Fantasia involves semi-scripted performance, these worlds represent musical improvisation; waving around to Missy Elliott is the concerto, and poking around in a busy city is the cadenza.

I wish for more from Fantasia: Music Evolved, but that's because it is already such a delight to watch, to hear, and to perform. The game is more pop than Pachelbel; I have visions of entire Mahler symphonies released as future downloadable content, even though I know that Avicii and Lady Gaga are DLC priorities. Until that dream comes true, I am more than content with Fantasia, which makes me feel like a graceful performance artist, a skillful sorcerer, and a master musician all at once.

View Comments (182)
Back To Top
8
Great
About GameSpot Reviews 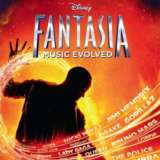 Kevin VanOrd went to the Oberlin Conservatory to study violin performance and composition, and he's seen the films Fantasia and Fantasia 2000 more times than he can count. His favorite film vignette is Rhapsody in Blue from Fantasia 2000; his favorite music to perform in the game is Inon Zur's main theme. He spent about 12 hours with Fantasia, and plans on spending many more.