Disgaea DS is a delightfully evil strategy RPG with enough depth (and prinnies) to entertain you for ages.

Disgaea DS is an enhanced version of the popular strategy role-playing game that was originally released for the PS2 and which later found its way onto the PSP. It maintains the original's light-hearted style and impressive amount of replay value, but also boasts a fresh multiplayer mode, a slew of guest characters, and full stylus controls. The game's difficulty level has also been lowered, which makes Disgaea the most player-friendly it has ever been.

Set in the demonic realm of the Netherworld, Disgaea casts you as the young and impetuous Prince Laharl, son of the recently deceased Overlord. Laharl has spent the last two years asleep and is awakened only when his less-than-trustworthy vassal, Etna, tries to kill him. Afterward, Laharl discovers that he'll have to slay any who oppose his claim to the throne to be the new Overlord.

Disgaea's turn-based strategy battle system is straightforward, with a moderate learning curve that shouldn't prove too intimidating. The grid-based battlefield is presented on the bottom screen while the top houses a valuable map that marks both enemy and ally units, making the game significantly more player-friendly because it aids in character positioning. Another feature that increases the game's ease of use is the ability to maneuver the camera, which greatly helps in targeting because you're able to get a better view of both the field and your opponents. There's also a very well-integrated zoom feature that enlarges panels to make them easier to select with the stylus, which is a convenience often lacking in most DS strategy RPGs.

The game's most striking aspect is its geo-effect system. Geo symbols, which are colored objects that grant special effects to their same-colored geo panels, can significantly alter the battlefield to the point that you can't proceed without dismantling or transferring them. For this reason, you might want to destroy every geo symbol on the map, but the most effective way of doing so, chaining, involves both the transferring and destruction of multiple geo symbols, which can quickly become tiresome and frustrating for beginners.

Combos, team attacks, and throwing also increase strategic play and are essential for besting the game's opportunistic AI. You trigger combos by attacking the same enemy in succession, which lets you quickly dispatch foes because it raises the damage rate. You'll also score extra goodies by filling a bonus gauge with each successful combo string. Team attacks, meanwhile, are specials that are initiated when you have characters placed near an attacking ally, and these grant you such a great combat boost if you pull them off consecutively that they're absolutely vital against powerful enemies. Throwing adds a refreshing dimension to the battle system by letting you lift and toss characters; this is useful for accessing hard-to-reach areas and can even be used to manipulate enemies by combining them to create a more formidable foe.

Disgaea boasts a remarkable amount of customization and depth due to its item world and dark assembly. The item world encourages you to level your favorite items by clearing dungeon floors within them, which grants you access to the specialist characters inside. Specialists increase the stats of their item depending on their class; for instance, a dietician increases a character's HP whereas a coach increases speed. Although the item world is just a series of random dungeons, it offers countless battle opportunities as well as limitless potential for decking out your characters in the best gear. The dark assembly not only adds depth but also operates as an engrossing minigame in which you propose bills to a demonic senate. These can vary from granting you access to more expensive equipment to special stages. What's most fun, however, isn't passing bills but "persuading" by force those senators who object to your machinations; this initiates a battle against a horde of higher-level demons, and though it's difficult to win, it's nonetheless a treat to thrash those who get in your way. The dark assembly also houses a standard character-creation mode, in which you can choose from 14 human classes and additional monster types to fill your ranks.

The DS version of Disgaea is visually similar to the PSP version, though a few adjustments were made to capitalize on the DS's top screen. The detailed sprites look almost identical, and you'll rarely encounter any slowdown from flashy spell effects. The game does suffer from poorer texturing and a lower audio quality, but the occasional voice acting is clear enough, and the background music is suitable. A prinny, the franchise's violent penguin mascot, now appears on the top screen during anime-style cutscenes, where he supplements random dialogue lines with foreshadowing and jokes. These snide comments pair very well with the game's jovial character and should prove amusing to both fans and newcomers. An extremely helpful option is the ability to turn off battle animations for enemy and ally characters; this drastically speeds up fights and saves you time by turning hour-long brawls into 20-minute tiffs.

There's a good 40 hours of gameplay in Disgaea's 14 chapters, though you can easily double this amount with side quests and visits to the item world. You can unlock guest characters from other Nippon Ichi games, including Adell and Rozalin from Disgaea 2 as well as Pleinair, franchise character-designer Takehito Harada's signature character, who is playable for the first time. Multicard multiplayer drastically increases replayability and offers myriad customization options; you can determine geo-cube effects that apply to all characters and even add a fog-of-war setting that limits visibility to your allies. The standard time limit and victory-condition settings are also included, and if you're the obsessive type, you can purchase items from friends to complete your collection. If you tire of multiplayer, you can always start a new game, keeping your characters, money, and unlockables as you try for another of the game's 10 endings or even Etna mode, in which you play through as Laharl's favorite vassal.

Disgaea DS is chock-full of fanfare as well as a surprising amount of depth and strategic play in a convenient handheld package, and it offers a great way to experience this unique strategy RPG. 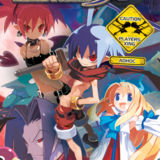 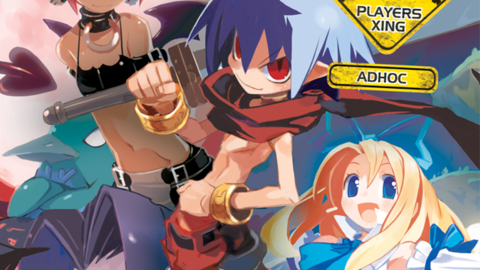 Take your army on the road and battle for the title of Overlord.