Pure, unadulterated fan service for the Nippon Ichi faithful and strategy RPG enthusiasts, though outsiders may find it incomprehensible.

The Disgaea series has long been a bastion of excellence in the realm of strategy role-playing games, and though Disgaea 3: Absence of Justice is no exception, it's beginning to show its age. Despite a great deal of minor gameplay tweaks, the series as a whole seems adamant in staying the exact same as it always has, which is immediately evident by its PlayStation 2-era (or worse) sprite graphics. That said, Disgaea 3 delivers what is undoubtedly the best combination of zany story and strategic gameplay seen yet in the series, and it's a fun and entertaining game that will keep fans hooked for dozens of hours.

Mao (not THAT one) is not your average scholar. As the number-one honor student in the Netherworld Evil Academy, his day is spent ditching classes, experimenting on other students, and being lazy. In the twisted world of a demon school, honor students like Mao do everything but earn good grades, whereas delinquents like his rival Raspberyl enjoy donating blood, striving for a perfect attendance record, and performing acts of charity. Mao's latest obsession is Super Hero Aurum, a legendary warrior of love and justice who traveled from one netherworld to the next to defeat their overlords before mysteriously vanishing 200 years ago. After "researching" all of the anime and manga he could get about Aurum, Mao becomes convinced that he must become a hero himself to gain the power necessary to overthrow his father, the overlord of his netherworld. All of this happens because his father accidentally stepped on his SlayStation Portable video game system and caused Mao to lose four million hours' worth of progress.

Of course, being a demon with an evil quotient of 1.8 million, he intends to become a hero as dishonestly as possible. With the help of his creepy butler Geoffery, Mao tracks down Almaz von Almadine Adamant, a self-proclaimed hero who has infiltrated the academy to defeat the overlord himself, and promptly kidnaps him to steal his title. Of course, things don't work out quite as expected, and so Mao sets off on a quest that involves an insane home-economics teacher, a gentlewoman fond of giving ridiculous orders to friend and foe alike, a rookery of explosive demonic penguins, and the true meaning of opening one's heart. In case you hadn't figured it out yet, Absence of Justice is truly out there even for the Disgaea series, which is well known for being absolutely absurd. Be prepared for self-referential in-jokes and fourth-wall breaking like none other, and keep an eye out for parodies of everything from Super Sentai to American Idol. Disgaea 3 is in many ways pure fan service, and if you count yourself as one of developer Nippon Ichi Software's faithful, you will be hard-pressed to find a more entertaining game. If on the other hand this is your first entry into the world of Disgaea, or you simply aren't a follower of anime, you may find yourself treading in unfamiliar waters.

This time around, the Netherworld Evil Academy serves as your base of operations, and within its ever-changing halls you will seek medical attention at the nurse's office, buy new weapons and armor at the school store, and even enter the world of your heart at select points to consult or do battle with your various subconsiousnesses. One major new addition is the Evility instructor, who for a price will teach you weapon skills, magic spells, and powerful passive abilities called Evilities with which to customize your units, greatly streamlining the character growth process.

The dark senate makes its return as the homeroom, and by attending--if only for a few moments before ditching--you can change assigned seating and enroll units in clubs, both of which affect battle performance. You can also recruit transfer students, request the formation of new clubs, ask for better items to appear in the school store, and more, though most major actions have to be approved by the school board, which can prove troublesome because demons are an understandably fickle bunch. Luckily, Mao's not above handing out bribes, taking over the school PA system to trick board members into thinking they're voting for something entirely different, or even beating his detractors into submission.

Once you've had your fill of the academy, it's off to the battlefield, where the bulk of your time will be spent. For the most part, the combat engine in Disgaea 3 is identical to its predecessors. As ever, combat is turn-based and you'll be deploying your units onto an isometric grid from a set base panel, positioning them, and unleashing an impressive array of attacks and special moves on your enemies. Nevertheless, this isn't to say that nothing has changed. Battlefields are larger than ever before, special attacks can be combined to create entirely new ways of inflicting pain, and monster classes can transform into powerful weapons that grant new skills to their wielders. Adjacent friendly units still have the potential to unleash team attacks or share spells, but homeroom-seating arrangements and club memberships play a great role in determining how likely they are to occur or if they're even possible.

The single most game-changing new feature found in Absence of Justice are the geo blocks: giant colored boxes that add a puzzle element to each level that they appear in and require some unique and highly strategic approaches. Geo blocks grant bonuses or penalties to anyone standing on top of them, but they can be destroyed in whole groups if you're able to toss a like-colored one next to another--but the trick is that connected geo blocks can't be lifted up or otherwise moved. Clearing geo blocks is almost always a priority, given that most are a huge impediment to your success and clearing them will make your life easier, as well as do significant damage to enemies perched on top of them.

If you're finished with or want to take a break from the main story, there are plenty of other things to do, including revisiting old areas for extra experience and exploring the Item World and the all-new Class World. The Item World, which is quite literally the secret land hidden inside your items, lets you fight your way through progressively difficult, randomly generated dungeons to make your gear more powerful. The Class World is very functionally similar, but you are battling instead for the chance to increase the stats of one of your units in a variety of ways, and each floor is completely full of geo blocks. Disgaea 3, as with its predecessors, leaves you with no shortage of things to do at any point, and with the potential to level your characters into the thousands so they can dish out damage by the millions, you may find yourself tweaking your characters for a long time to come.

Disgaea 3 features an excellent soundtrack and the English voice acting is top notch (Mao in particular), though if for whatever reason the English voices aren't your thing, you'll be pleased to know that the original Japanese dub can be activated at any time. Graphically, however, it doesn't fare so well. Absence of Justice has ostensibly taken the series into the next generation on the PlayStation 3, but its lackluster graphical performance begs to differ: Outside of the polished, high-resolution menus, there is absolutely no reason that it couldn't have appeared on the PS2. Battles still float ominously over featureless gradients or still art backgrounds, cutscenes feature absolutely no animation (with the exception of the beautiful anime title sequence), and character sprites are pixelated, ugly, and look downright out of place on the much sharper and cleaner terrain. Even more absurd is that some of the larger levels actually suffer frame-rate problems, and that the absolutely atrocious camera is back and now features a new, even less useful way to show you troop placements.

Graphical complaints aside, it's indisputable that Absence of Justice has perfected the series' five-year-old formula and provides the best Disgaea experience yet. Fans of the series will enjoy its self-referential humor and solid gameplay, though outsiders will likely have difficulty enjoying the more esoteric in-jokes and find the often poorly explained combat system incredibly complicated. But if you've got the time and the patience to figure it all out, you'll find an incredibly deep and rewarding game that will keep you hooked for hours.

View Comments (5)
Back To Top
7.5
Good
About GameSpot Reviews 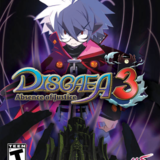