Digimon World DS is a solid, if unremarkable monster battle game, which pretty much means it's the best Digimon game ever made.

Fans of the Digimon franchise have had to put up with some shoddy games over the years. Thankfully, if Digimon World DS is any indication, it looks like Namco Bandai is finally taking steps to reverse that trend. The process of catching monsters has been made less tedious in this latest game, the battle interface has undergone a few strategic tweaks, and you now have a lot more leeway with regard to training and customizing your collected monsters. The ability to trade and breed monsters with people over the Internet using Nintendo's Wi-Fi Connect service is also a welcome new feature, even if actual multiplayer play remains limited to opponents that you can fit into the same room with you. Digimon World DS still has some catching up to do when compared to the typical Pokémon game, but all of the various improvements go a long way toward making this the kind of game that Digimon fans can buy and play without much fear of disappointment.

Digimon World DS isn't much different from all of the other monster battle games out there. It's a story-driven dungeon crawler where you set out to capture and raise as many digital monsters, or Digimon, as possible. Monsters can be collected in the wild, evolved into other monsters at certain points, and mated with other monsters to yield eggs that eventually hatch into still more monsters. In all, there are more than 300 of the little buggers to find. Of course, because this is a monster battle game, you can use the monsters you collect to battle other monsters in turn-based battles. These battles are three-on-three and play out much like the battles in a traditional role-playing game. When it's your turn to attack, you pick one of your monster's attacks from a list and then watch the attack happen. Turns go back and forth until one side's team is defeated. Like in Pokémon, the monsters in Digimon have strengths and weaknesses based on their type. Classes, such as dragon, beast, insect, dark, and holy, come into play. Digimon World DS also ups the ante on its predecessors by letting you situate your Digimon on specific spots on the battlefield. You can place your monsters side-by-side to activate certain support effects or split them up to prevent the enemy from whacking you with group attacks. Beating the CPU's monsters will earn you useful items or advance the story along, while beating your buddies will earn you bragging rights and boost your ego. Ultimately, you want to capture as many Digimon as possible, achieve the rank of master trainer, and see the story through to its conclusion.

The biggest problem with previous Digimon games is that they put too much emphasis on the story and too little emphasis on the collecting and customizing of the actual monsters. Digimon World DS puts the focus where it belongs. The world has been streamlined so that dungeons are all accessed from a central area, and the story has been put together so that most events involve seeking out certain Digimon or improving your trainer rank. Side quests are given to you by your own Digimon. Completing those tasks gives them new abilities and allows you to evolve some of them into their rarer Mega and Ultimate forms. Finding and catching monsters has also been simplified. Each of the 20-or-so dungeons in the game contains a specific set of monsters. Those monsters still randomly challenge your Digimon to a battle every few steps or so, but now, instead of taking a random shot at trapping one, you can just head back to the farm to generate your own monster once you collect enough battle data.

In exchange for making it easier to collect new Digimon, the folks at Namco Bandai have greatly expanded your options with regard to training and customizing Digimon. You can give your monsters stat boosts by collecting more battle data before generating them, and you can strengthen key attributes by training them with specific tools on your very own Digifarm. Your monsters also gain different types of experience based on the kinds of monsters you have them fight. When one of your monsters gains enough levels to Digivolve into a later form, you usually have two or three potential Mega and Ultimate forms to pick from based on the different types of experience your monster has gained. About halfway through the story, you're given the ability to return Digimon back to their earlier forms, which allows you to mix and match the abilities of different types of Champion, Mega, and Ultimate Digimon. On top of all that, you can outfit your monsters with swords, armor, and other items that further boost their abilities.

Longtime Digimon fans will appreciate the inclusion of Digifarms. Digifarms are like the day care centers in Pokémon. As the name implies, they're farms where you can park any Digimon not currently traveling in your party. You can leave weaker Digimon behind, and they'll train on their own and gain experience on the farm while you and your other monsters go out on quests and participate in battles. Though you have little control over day care centers in Pokémon, in Digimon Worlds you have some control over how your four Digifarms are set up and the specific areas they train. You can make them larger to hold more Digimon and install specific tools and exercise equipment for training your Digimon. For example, if you want to build up a Digimon's holy attribute, you can place a phonograph on the farm. These tools even improve the longer they're used and become more effective as the simulated days pass. Digifarms are a godsend for beefing up lower-level Digimon and for when you just can't bear to backtrack through earlier dungeons.

The single-player story can take a good 15 hours to finish. But you can easily double that by completing all of the side missions and filling up the Digimon index. However, to get the most out of the game, you really need to take advantage of its multiplayer options. With the exception of a couple of points in the story, the only way to produce DigiEggs is to mate one of your monsters with someone else's monster. There are about a dozen unique Digimon that have to be obtained this way. One nice thing about the mating system is that it supports Nintendo's Wi-Fi Connect service. If you can't find anyone locally to mate Digimon with, you can swap friend codes with people online and arrange times to pair up your amorous monsters. Unfortunately, that's all you can do with the game online. Versus battles and monster trades are limited to the system's local wireless footprint. Versus battles alone justify the effort it takes to track down a local opponent. Later dungeons and CPU opponents can put up a strong challenge, but the CPU lacks the spontaneity that only humans can display. CPU monsters also tend to appear in predictable teams, whereas a human opponent may surprise you with a mix of monsters you've never seen. If you can find someone to battle locally, you'll enjoy the game a lot more.

For the most part, Namco Bandai did a good job of putting together a solid game. It doesn't really introduce anything that wasn't in Nintendo's last Pokémon title, but it's better by leaps and bounds over previous Digimon titles. The only major drawbacks are the same drawbacks that every game is guilty of in the genre. Battles feel repetitive after a while, grinding levels in dungeons just to level up specific monsters is tiresome, and the subject matter is definitely geared toward younger players. The game also doesn't do much to push the audiovisual capabilities of the Nintendo DS. All of the artwork is colorful, and the monsters and backgrounds are detailed, but it's the same sort of stuff we've seen on the Game Boy Advance. However, some of the monster sprites are rather large, and there are short video clips that play during Digivolve scenes. It's also sweet that the upper screen is used to show what's happening on the Digifarm while you're traveling but switches to an information view when you're in the thick of battle. You really don't know how spoiled you are until you no longer have to press start during a battle to check basic info. Meanwhile, audio consists entirely of a wide selection of peppy battle and dungeon themes, along with a collection of generic sound effects that were probably borrowed from earlier Digimon games produced on the PlayStation and GBA.

If you prefer Pokémon or are waiting for Nintendo to produce a proper Pokémon game for the Nintendo DS, you probably won't be all that impressed with Digimon World DS. After all, it plays a lot like Pokémon and shamelessly borrows some of the more recent enhancements that Nintendo introduced in the latest Pokémon games. However, those enhancements, along with a few other improvements, are what make Digimon World DS so much better than all of the other Digimon games published previously. Fans of the Digimon franchise will likely be very pleased with the game because it's the first Digimon game that they can legitimately sink their teeth into. 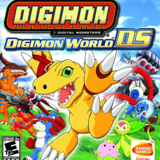 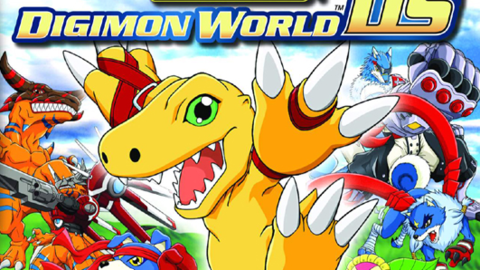 Digimon makes its way onto the DS.