Even with its budget-minded pricing, Digimon World 3 is at best an average role-playing game that will appeal only to fans of the greater Digimon franchise.

In the wake of the Pokémon craze that began a few years ago, it wasn't surprising that a host of imitators cropped up to capitalize on the monster-catching fandom that the series created. As Pokémon's popularity has waned, though, it has been surprising to see any of its imitators still hanging on. Bandai's Digimon is the most prolific of the Poké-style monster-breeding franchises, and it's being furthered yet again in video game form with the recent release of Digimon World 3. Even at the height of Digimon's popularity, the Digimon World games were suited only to real fans of the series, and at this late date, even they may not be interested in another mediocre rendition of the franchise.

Digimon World 3 abandons the monster-raising trappings found in previous games in the series, instead passing itself off as a pretty standard RPG. You assume the role of a young boy, Junior, who is venturing into a persistent networked universe called, of all things, Digimon Online. You'll pick a set of three Digimon from a selection of several sets, and you'll then be turned loose in the world of Digimon Online to develop your newfound monsters as you see fit. You won't actually be doing any fighting with Junior--the Digimon themselves make up your active party. Initially, your goal seems only to build your Digimon into formidable fighting units and become the grand champion of Digimon Online, but you'll eventually become embroiled in a fight against a cyberterrorist group that's threatening the continued safety of the world. This is standard RPG fare, as mentioned.

Of course, the real point of monster-based franchises like Pokémon and Digimon lies in empowering the monsters in your possession. There are a number of things you can do throughout the course of Digimon World 3 to accomplish this, if you have the patience to do so. As you might expect from an RPG, the most basic way to level up is through combat, combat, and more combat. Your three Digimon will gain experience, rise in level, acquire more hit points, and so on. Later on, you can obtain new techniques for your Digimon to use in battle. Finally, you can make your monsters "digivolve" into more advanced forms that have greater stats and more-useful techniques.

You can do all these things with your creatures in Digimon World 3--that is, if you can stand to sit through the grunt work required to upgrade them. The game's combat engine is painfully slow and tedious to use, making the process of leveling up feel like an unpleasant chore rather than the meat of the game. As if the speed of battles weren't enough of a hurdle, the monsters you'll encounter are quite often too strong for your Digimon to handle, so you'll be spending a lot of time running back and forth between areas with monsters and the local inn. For a game whose main gameplay component is building up your characters, Digimon World 3 makes the process needlessly complicated and annoying.

Even with its budget-minded pricing, Digimon World 3 is at best a poor role-playing game that will appeal only to fans of the greater Digimon franchise. The game does have a few minor positive points--the background graphics are surprisingly easy on the eyes for a PlayStation game, for instance--but they're hardly enough to save a game with such tiresome gameplay. Ultimately, if you're in need of a good RPG for the PlayStation, you'd be better off digging through the bargain bins for one of yesterday's gems than settling for one of the aging system's last stragglers. 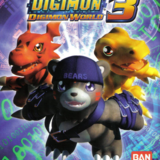