While Digimon Card Battle accurately duplicates the flow and gameplay of the tabletop game, its simplicity will turn off any but the youngest of players.

Very few card games can stack up to the likes of Magic the Gathering when it comes to depth, or to the Pokémon collectible-card game when it comes to exploiting a license for all it's worth. Many fans of collectible-card gaming would contend that the Digimon card game is one of the few franchises capable of cross-media success. Digimon Digital Card Battle brings the modest tabletop card game to the Playstation, using the same rules and cards that enthusiasts will be familiar with, in unison with polygonal battle animations stripped directly from the latest in Bandai's other digital world franchise, Digimon World 2.

Digimon Digital Card Battle places you in the role of a card battler, living in a cyberworld where entire cities are dedicated to card battles and the arenas that house them. After selecting a partner, or right-hand digimon, your battler will travel from city to city challenging the best players available. Many of the digimon themselves train and compete in the card battles and can offer a fledgling battler many useful tips, especially through the nicely done tutorial mode. You won't have any trouble picking up the basics of the game, however, as the digimon card game is one of the simplest card games around. Digimon Digital Card battles follow a very streamlined system, where a minimum of thought goes into deck strategy, instead focusing on lucky guesses for attack types, in a manner very similar to paper-rock-scissors. After dealing your hand and selecting your battling digimon, a light, medium, or heavy attack is chosen. Light attacks do the least damage but can potentially counter the heavy attacks or produce some other useful effect. Heavy attacks are the most vulnerable but also the most powerful. Matches take on the form of a guessing game, with the odds skewed in favor of whoever possessed the stronger digimon type. The only truly random factor is the support cards, which can make up for fighting a difficult enemy or can cause an untimely upset. Due to the inherent simplicity, battles are often highly predictable and lose their luster after the initial dozen or so games.

Graphically, Digimon Card Battle does an adequate job of providing a colorful, visually pleasing backdrop for the card games. The characters and digimon you'll meet along the way appear true to their cartoon forms. The incentive for players already enjoying the card game to invest in the Playstation version seems to be the addition of the Digimon World 2-style battle animations. Each character will pull off the move selected, and the effects can be quite pleasing at times. While the polygonal battles are done nicely enough, they add a considerable amount of downtime to the matches, so more impatient players will prefer the faster pace when graphical battles are toggled off.

Much of the draw to Digimon Card Battle is the ability to collect rare cards from defeated opponents to build and customize your own ultimate deck. You won't be limited by the basic card lists as you may fuse two cards together to create your own specialty cards, some of which are only available in this way. There's quite a bit of depth in the card-creation system, although you may feel limited by not being able to use many of the better cards until well into the game. In addition to being able to access the higher-end cards, you are rewarded with other in-game bonuses, adding a bit of replay value to the otherwise briskly completed adventure.

While Digimon Card Battle accurately duplicates the flow and gameplay of the tabletop game, its simplicity will turn off any but the youngest of players. Those who still enjoy the card game, however, or are die-hard fans of the cartoon, may want to give this game a shot. 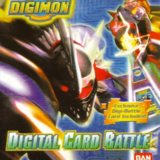