Dig Dug Deeper's lack of difficulty, levels, and extra features make it difficult to recommend to even the most ardent fan.

Remakes of classic games usually take one of two routes. One route involves slightly changed gameplay mixed in with revamped graphics, while the other route is just a graphical overhaul of the original. Infogrames chose to take the former route with its remake of Dig Dug named Dig Dug Deeper, which isn't necessarily for fans of the original arcade game. A number of factors, including a lack of difficulty and a relatively small number of levels, should make you think twice before making a purchase.

Dig Dug Deeper has only one single-player gameplay mode that's very similar to the original arcade game--there are no multiplayer modes or secondary modes that offer variations on the main game. This single mode contains six worlds, and with the exception of the last level, each is divided into several substages, which are divided even further into individual digging areas. Other than the obvious visual changes, the only substantial difference between the levels in the original game and those in Dig Dug Deeper is that Deeper's stages have a miniscule overland map that essentially serves as a transition point between underground areas and nothing more. So at the beginning of every stage, you'll start at the overland map and wait a second or two before a pooka--one of the game's enemies--erupts from one of several holes visible on the surface. After it leaps out and dives back down into its hole, you give chase and enter the underground digging area where the pooka and the rest of its cohorts are located.

In the original Dig Dug, pookas and fygars could be disposed of in a few different ways, and that remains true in Dig Dug Deeper. As you dig through the underground area and encounter enemies, you can either use Dig Dug's trusty drill or use objects found within the environment--rocks, poisonous gas, and lava can all be used to kill the enemies if you use a little strategy in the way you dig. Using any of these objects usually results in more points and different kinds of power-ups that give Dig Dug additional speed or drill power. This creates a little extra incentive to be an inventive digger, but most players will probably plow through the levels using Dig Dug's regular "pump" attack. In the end, Dig Dug Deeper's core gameplay is still basically the same as that of the original Dig Dug, which may not be a bad thing for hard-core fans of the original arcade game. But those looking for a game offering a progression in the Dig Dug style of gameplay will probably be disappointed.

Even if you're a huge fan of the original game, Dig Dug Deeper's lack of difficulty is still a problem. Most players should be able to get through all six of the game's worlds within a matter of hours on the normal difficulty setting with the default number of lives, but increasing the game's difficulty level to hard only raises the speed at which pookas and fygars run and float through the underground world, so it's not really that much more difficult--especially if you've already played through the game.

In fact, Dig Dug Deeper's spotty control is really the only thing that makes the game at all difficult. Unfortunately, Dig Dug is incapable of making sharp or precise turns, so more often than not, you'll run right into fygars, pookas, and natural obstacles and die completely by accident, rather than have your enemies successfully trap you. It's frustrating, especially in the later levels, when you're up against 10 or more enemies.

While this new game's graphics have been revamped to take advantage of 3D hardware, Dig Dug Deeper still looks like it was developed sometime around 1997. The soundtrack offers nothing particularly noteworthy, except for one segment in particular that sounds like some sort of demented canary chirping. In addition, Dig Dug Deeper's relative lack of difficulty, levels, and complete lack of extra modes and features make it difficult to recommend to even the most ardent Dig Dug fan. 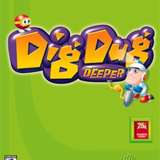