Die Hard Trilogy has been sabotaged - by shoddy graphics

Die Hard Trilogy has been sabotaged - by shoddy graphics. It more than achieves its ambitious goal of providing three complete, stylistically distinct games on one CD. Unfortunately, in two of the three, drowsy frame rates and unresponsive control poisoned what could have been the sleeper classic for the Saturn.

Each game episode loosely follows the plot of its corresponding film. The first, entitled Die Hard, is a frenetic 3-D overhead shooter. The player, as John McClane, must employ guerrilla tactics to stay alive and kill hundreds of German terrorists, on floor after floor of the Nakatomi Plaza (from the parking garage up to the top). At his disposal are pistols, machine guns, grenades, and the odd exploding car. Who knows exactly why the building is littered with hot dogs, candy bars, and Cokes - but why look a gift horse in the mouth, especially when it delivers health bonuses so desperately needed in this one-man war? Unfortunately, control in this first mission is exceedingly lethargic. This sluggish response means that when McClane is required to take down multiple assailants (because he's caught in a crossfire - a frequent occurrence), he misses target after target. This is extremely frustrating. The second mission, Die Harder, is a first-person rail shooter that suffers from an abysmal frame rate and poor, blocky animation. As a result, the Saturn version feels like an ugly Virtua Cop clone (by contrast, the Playstation version is near, if not at, the top of the genre). The rectile is nearly impossible to place accurately, a problem that is compounded by the awkward camera view changes. Again and again, the crosshairs are sluggishly moved to the target, and just when the shot is finally lined up, the camera moves, taking the crosshairs with it and depriving the player of the satisfaction of the kill.

Diversity of background is Die Harder's lone strength, bringing play from an airport shoot-out to a snowmobile chase to a full-blown aerial assault (where McClane attempts to bring down multiple jetliners and helicopters in the final stretch). Unfortunately, variety just isn't enough to save this episode from the frustration of its awkward and difficult gameplay.

The third episode is this title's redemption. Die Hard with a Vengeance is a visually spectacular driving game that literally packs a explosive punch. Players drive through Chinatown, Central Park, the New York Subway, and beyond, in a race against the clock to find bombs hidden in phone booths, fire hydrants, and bomb cars. If McClane fails, New York City will experience a small-scale apocalypse. The pace is incredibly fast, and the voice-over admonishments to "Turn left here!" and "Slow down, or we'll go back in time" do little to assuage the adrenaline bite. The animation of the player's taxi is more solid than in the Playstation version, and little, if anything, is lacking. The collision detector doesn't feel particularly accurate, but the intensity of the game's pace more than makes up for it.

Die Hard Trilogy comes replete with black humor and gratuitous violence. Instance after instance of vehicular manslaughter results in many pedestrians' blood on the windshield, the only penalty for such negligence being the occasional voice-over admonishment "Don't do that again!" The deadpan soundbites carry much of the films' irony onto the Saturn: Faced with the task of exploding dozens of bombs, McClane's voice-over chimes in, "Somebody give me some aspirin." Unfortunately the Playstation's violent end-of-level bonus-point tally appears only as text on the Saturn. That is to say, the whimsical animation of dozens of screaming hostages as the score is tabulated on the Playstation is missing on the Saturn.

Luckily, the games can be played in any order. The first two episodes' combination of awkward control and slow, choppy graphics make them almost unplayable. The third episode, Die Hard with a Vengeance, is so good that it alone almost justifies the price of admission. 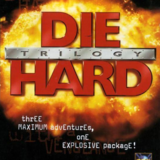