Basically, it's a blast.

It's ironic that Die Hard, the movie most ripe for console adaptation, has taken so long to hit home video game systems. Perhaps attempting to make up for lost time, Sega is bringing Die Hard Arcade to the Saturn right on the heels of the popular Die Hard Trilogy game. The result is a great action/adventure title with a hero that in no way resembles Bruce Willis.

Based on an original (and I use that term loosely) storyline, Die Hard Arcade puts players in the role of New York police officer John McClane. The story picks up where Die Hard with a Vengeance left off, and McClane's back in Los Angeles to visit his wife (who still works for the Nakatomi Corporation) for Christmas. And wouldn't you know it? A pesky group of terrorists have her, along with the president's daughter and twenty-eight others, held hostage. And before you can say, "How can the same shit happen to the same guy thrice?" you're hitching a ride on a SWAT helicopter to save the day.

Truly the next generation of linear beat-em-ups, Die Hard Arcade uses 3-D rendered graphics (reminiscent of Virtua Fighter 2) for gameplay and intermittent cutscenes. Action scenes look really good - the onscreen characters move like real people, even though they don't exactly look lifelike. The movie-like scenes suffer the most from the jagged-edged characters (sporting more active corners than Times Square), but they are entertaining. The soundtrack features some questionable voice acting and a decent musical score that pumps along to the grunts, kicks, and explosions provided.

The gameplay in Die Hard Arcade takes you (or you and a friend) through the Nakatomi building as you pummel your way through a hundred or so bad guys. The game is similar to old 2-D side scrollers like Final Fight and Double Dragon, and like these classics, it allows you to pick up a variety of weapons contained in each stage. There are guns, pipes, chairs, bottles, aerosol cans (which can be used in conjunction with a lighter), and other items, which combined with standard fighting moves, are used to inflict pain. Press the right combo of buttons and you get special combination moves. Your enemies take some work to defeat; some require only mild brutality, while others require repeated attacks. A nonviolent alternative is provided as well - you can put some terrorists down and arrest them. Die Hard Arcade doesn't have the depth of a true fighting game, but it offers a lot of action.

Most surprisingly, the game holds its own - even without the "tacked-on" Die Hard license, you would still have a cool game. The game takes about three hours to play from start to finish and there are multiple endings, which depend how many continues you use (most players, though, will want to use the included classic Sega arcade game, Deep Scan, to earn more "credits" to beat it on one try). Die Hard Arcade, while not on the level of Die Hard Trilogy, is simple, violent, and easy. Basically, it's a blast. 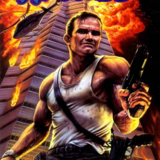