Devastation is an ambitious but seriously flawed shooter.

If nothing else, Devastation is ambitious. Digitalo Studios' futuristic first-person shooter features more than 35 weapons, arcade-style and tactical modes of play, computer-controlled teammates, a detailed physics model, and single-player missions that incorporate "botmatch"-style base attack and defense objectives (that is, both you and your opponents are aided by computer-controlled "bot" characters). Unfortunately, Devastation tries to be a jack-of-all-trades, but is master of none, and it's lacking in a few key areas.

Like so many other action games, Devastation places you in the role of a rebel who must fight against an oppressive corporation that now controls most of the world. Devastation uses a bunch of clichéd events and settings to pound this familiar theme into a mush that is indistinguishable from plenty of other generic shooters. There's the subway level, the sewer level, the warehouse level, the part where you have to single-handedly fight an attack chopper, and the level where you get conked on the head, stripped of your weapons, and tossed in jail (though as it turns out, Devastation takes away your weapons and tosses you in jail not once, but twice).

Though freedom was obviously the first victim of Devastation's totalitarian corporate state, garbage collection appears to have been a close second. The game's Unreal-engine powered environments are filled with trash. It's never explicitly stated just what, exactly, the evil corporation is selling, but from the general makeup of the debris, it's probably soft drinks, Chinese food, or oil barrels. A lot of this busted-up bric-a-brac actually exists as independent objects in the world, all affected by an at least theoretically realistic physics model. For instance, you can shoot a milk crate in its upper left corner, and it'll tumble over its rear left axis.

The physics system is a neat idea, but, as implemented, it suffers from two major problems. The first is that the rules governing the physics are spotty at best. Often objects will simply get stuck--on walls, on ceilings, or even in midair. If you pick something up and toss it down at your feet, it'll either disappear completely or become half-buried in the ground. The imprecision of the bounding box around your character causes you to constantly knock things over, as if you were navigating the world while wearing a bulky and invisible costume. In fact, the physics will often make you feel that you're not playing an action-packed shooter, but rather a simulation of being the world's clumsiest action hero.

The second, and bigger, problem is that no real attempt has been made to integrate the effects of the physics model into the game. Yes, you can pick up a chair and smash it over somebody's head. But since everybody's carrying a small arsenal of high-tech weapons, holstering your gun and then stopping to grab some furniture is mostly just a good way to get shot. What's worse, the developer apparently overlooked some opportunities to actually make good use of the physics engine. For instance, when hit with a few bullets, oil barrels explode, and thanks to the physics engine, a barrel on its side will roll, which could lead to some interesting tactics such as rolling a barrel toward an enemy position, then shooting it when it gets near its target. Unfortunately, while you can pick up and toss a barrel, there's no way to adjust your grip so that it lands on its side. A thrown barrel will almost always land on its flat bottom, causing it to quickly skip to a stop. The physics system ends up being more of a somewhat goofy graphical effect than a feature that impacts the gameplay in any meaningful way. Oddly, some other standard environmental effects you might expect from a new first-person shooter are entirely missing--there's no shattering glass, for example.

The game's 21 missions start off just like most goal-oriented first-person shooters. Run here, flip this switch, and so on. In some levels, you're accompanied by as many as eight computer-controlled teammates, but the AI that controls their behaviors seems half-finished. At one point, the game stops so that a teammate can warn you about how dangerous a particular laser gate is, though that doesn't stop her from barging right into it and dying five seconds later. Often, teammates will get stuck somewhere or just stop and begin firing into walls for no apparent reason. You can give them four basic commands: stop, follow, attack, and defend. Since roughly half the missions end if any friendly character gets killed, it's often best to order them to stay back. This is especially important because once they get a whiff of enemy activity, they'll pretty much refuse to follow orders until all nearby enemies are dead.

About halfway through the game, the levels open up a little and become a sort of botmatch version of the game's most interesting multiplayer mode, called territories. In it, you must defend your own base, which includes a destructible player-spawner, while simultaneously mounting an attack on the opposing team's base and player-spawner. The spawner removes any requirement for keeping your teammates alive (when they die, they're immediately resurrected back at base), which means you can let them go about their crazy business without worrying about their safety.

But this potentially innovative mission design doesn't quite work out, since it, like other parts of the game, seems only half-finished. Throughout the game, enemy AI is generally passable, though not notable in any real way. Opponents will duck and look for cover. However, they'll often duck for cover in the middle of a completely open area, so whether or not they're actually behind cover appears to be more a matter of luck than any rational thought process. They also have no idea how to throw or run from grenades, which means they can't flush you out of an entrenched position. But the biggest AI flaw becomes apparent in these later missions. The AI appears to have no real desire to assault your base. On the levels in which your base is behind an electric gate that requires a set of codes to unlock, the AI can retrieve the codes but quite simply refuses to use them. One mission requires you to defend your base for a certain period of time. We marshaled all our teammates away from the action in the base's basement, then walked away and left the game running all night. By morning, the enemies still hadn't managed to unlock the gate.

The game is also plagued by crashes and various other technical issues. On our test computer (which has run every other Unreal-engine game flawlessly) we were dumped back to the desktop at least twice during each of the last 10 missions. Multiplayer is less stable; we haven't been able to play more than 10 consecutive minutes online without a crash. For some reason, the built-in browser lists all pings as zero. From what we've heard from various Devastation fans at the game's official forums, we're not the only ones experiencing these problems at this point.

Assuming everything works, Devastation's multiplayer is pretty standard stuff. It includes deathmatch, team deathmatch, capture the flag, and the aforementioned territories mode. Aside from the physics system (which is disabled on most of the existing servers, since it puts a huge strain on the host system), there's nothing about the game's multiplayer that makes it stand out from the crowd. Otherwise, the game is still a decent shooter that's fast-paced and offers a huge variety of weapons, though its technical problems detract from both the single-player and multiplayer modes.

Devastation has occasional flashes of inspiration. Once in a while, you'll kill an enemy and he'll fall back into a pile of boxes, dramatically causing them to tumble in every direction. But then the AI will break, or some sound effect will be missing, or the game will just crash. Devastation is an ambitious but seriously flawed shooter. Though much of its gameplay is otherwise decent, Devastation is ultimately plagued by too many incomplete concepts and annoying issues to recommend it. 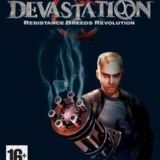 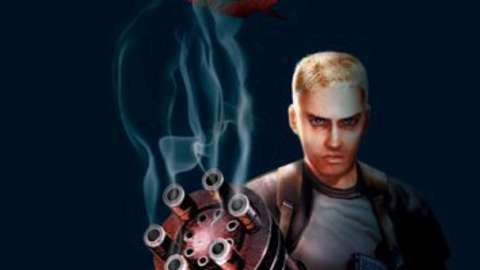 Devastation is an ambitious but seriously flawed shooter.