Destruction Derby is one heck of a confused game. It's probably the only racing game that awards points for smashing into the opposition, even though the more your car makes contact with others, the more likely it is to blow up, thus ending the game. Perhaps because of this irony Destruction Derby, now in its second installment, continues to be one of the Playstation's most exciting racing titles.

The basics of Destruction Derby 2 are almost identical to the original. You will still find three modes of play (Wreckin' Racing, Stock Car Racing, and Destruction Derby), three cars to choose from, and a host of different tracks (seven raceways, four Destruction Derby enclosed arenas). What's new in DD2 is the size and speed of the courses. The winding, narrow, claustrophobic roadways of the first Destruction Derby have been replaced with huge, wide superspeedways worthy of games like NASCAR Racing and The Need for Speed. Each track offers its own set of characteristics and physics, with whipping turns, monstrous jumps, and high banks. All are infinitely superior to the tight, slow courses of the original.

But don't think for a minute that the game is easy just because the tracks are more conducive to high-speed racing. The sense of speed in DD2 is terrific, though not quite the 250 mph the speedometer claims. Regardless of which car you select, the asphalt in DD2 seems to be covered with glare ice - which means your car will be slippin' and slidin' from the get-go, rocketing the unwary straight to the back of the field. But keeping your car on the track is only half the battle.

This wouldn't be Destruction Derby without spectacular vehicular calamities galore - accidents that by far outclass those found in the first version of this game. Cars flip, roll, smoke, and splinter into metallic shards, leaving dangerous bits of shrapnel that in turn lead to some of the best multicar wrecks in gaming. Pit stops have been added for damage repair. Like the original, DD2 boasts some fabulous, photorealistic graphics for a spectacular view (though you'd be a fool to take your eyes off the road!). On the downside, the number of camera views has been reduced to two: in-car and low chase. A high chase view is sadly missing. 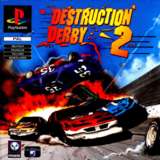 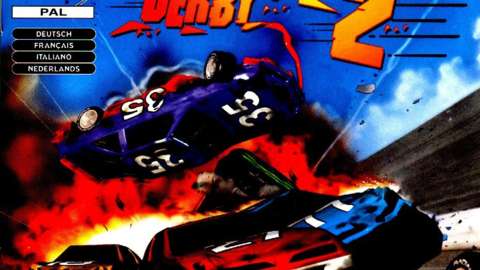