Destruction AllStars has solid driving, but its demolition derby-style car combat drags as much as it thrills.

With its bright energy, colorful characters, and wacky-powered cars, Destruction AllStars takes many of the aesthetic and mechanical trends from the last five years of multiplayer-focused live games and applies them to the long-dormant car combat genre. Speeding around beautifully detailed and cartoonishly articulated demolition derby courses, looking for your chance to rev your engine and hit another player so hard their ride explodes. When your own car inevitably gets busted up beyond recognition, you can hop out of your car and climb into another: A novel idea, but one that keeps you out of the action. Despite its striking visuals and solid driving fundamentals, Destruction AllStars' demolition derby-style car smashing is inconsistent and unpredictable. Every multiplayer game has highs and lows, but Destruction AllStars' best bits are few and fleeting.

You have one job to do in Destruction AllStars: Get into a car and crash it into other players. At the start of each match, 16 players start out on foot and race to grab one of a handful of empty cars, which come in many recognizable shapes like slick sports cars, burly SUVs, and tough trucks. Unlike in most car games, though, you are not tied to your car forever. You can eject from a vehicle at any time to trade for a new model or because the car's health is low and you don't want to wipe out.

Whether you crash or get crashed into, at least you're going to look good doing it. Destruction AllStars' large arenas are incredibly well-detailed and drenched in bright, colorful lights are a visual feast. The characters, from Fuego the masked-metal head to Ratu, a teal-haired boxer in an orange jumpsuit, are all drawn in a familiar Overwatch-esque style but have very specific looks that pop and draw you to them all the same. Even the little flourishes, like how a character jumps into an empty white car which instantaneously takes on their color scheme, look cool every time.

There are four multiplayer modes, but they all boil down to doing one thing. In Mayhem, the 16-player free-for-all and de facto standard, you earn points depending on how much damage you can do to another player's car and/or character. In Carnado, an eight-on-eight team-based game, hitting them earns you gears, which only turn to points when you drive your car into a swirling purple vortex that tears it to shreds. There's also a King of the Hill-style "last car standing" game and a second team-based game called Stockpile, where you have to get out of your car to stash points at three bank locations.

No matter how you keep score, though, you have to crash more cars than everyone else. Despite the attempts to add some variety, Mayhem is the simplest mode and the one that best complements the chaotic nature of the game. A fast and loose free-for-all with lots of ways to score, Mayhem is a casual, do-what-you-feel kind of mode that feels natural and reflects Destruction AllStars' zany, madcap vibe.

Carnado, the best alternative, adds interesting tactical considerations to the game, but they're difficult to act on. Since players need to lock in their gears before they become points, you can target weakened cars to prevent your opponents from cashing in, but defending a fixed position feels like wasted effort; you have to be in the right place at the right time to stop a car from scoring, and the time you spend playing defense is time you could have spent wrecking enemies and earning gears of your own.

In addition to the multiplayer, you have the ability to practice against AI bots or play the single-player "Challenge Series," a character-specific set of minigames with a small, inconsequential bit of character development attached. While it's interesting to see some cutscenes with the characters and some extra modes that wouldn't work in a multiplayer context, the mode feels tacked-on. It's a momentary detour at best. There's a single Challenge Series mission pack that's available for free at launch. The rest will be released over time as paid DLC, which seems like a death sentence for the already anemic single-player side of the game. Relegating the single-player content to a drip-feed of DLC undercuts the single-player mode's potential to grow into something more substantial.

Destruction AllStars' arcade-style driving feels smooth and highly maneuverable. Turning is wide, but precise enough that you can take a pursuit angle and catch up to another player, assuming they don't see you and take evasive action. Using a brake and a very aggressive e-brake that basically works like a quick 180-degree turn, you have all the tools you'll need to chase opponents up the walls, around bottom pits, and through giant buzzsaws. These hazards and superhuman tricks make the chases more eventful, but they aren't exciting as you might hope. Often, a tight turn is a more effective trap than something that looks wild and deadly, even for skilled players.

Chasing is fine, but you need to cause crashes to win. You can obviously just steer toward another player and put the pedal to the metal, but there's an art to winning crashes. You have the ability to boost forward or to the side at ramming speed by flicking the right analog stick, which both increases damage to their car and protects yours. Ramming ups your speed but decreases maneuverability, and it's on a small cooldown, so your timing is crucial. While it makes sense that you can't simply ram all the time, even the small limitations on your ability to blow things up can feel stifling, especially when you're first starting out.

The rules of ramming and who "wins" a collision can also feel somewhat nebulous. The different cars you can drive, which range from sports cars to trucks to SUVs, have a different balance of weight, top speed, and maneuverability. When two cars crash head-on, the heavier, faster car pushes the lighter, slower one. Ramming can give you an edge, but it isn't a guarantee. In less clear-cut scenarios with more than two cars bouncing against each other at less-than-ideal angles, it's nearly impossible to predict how much damage a smash will do, or if you should even try.

On the plus side, though, success really is its own reward. In the heat of the moment, ramming your car into another player's can be exhilarating. Everyone's swerving and jockeying for position, so it's often a game of bumps and fishtail-inducing partial hits, but eventually you will find an opportunity to fully smash your bumper and send them flying. Like when you get "good contact" swinging a baseball bat, you can feel the force and effect of landing a solid blow, and it is quite satisfying.

Opportunities for those kinds of hits aren't as always abundant, though. Even with 16 players, you will spend a fair amount of time driving around an arena, jockeying for position. You'll find yourself chasing a car, swerving to avoid enemy takedowns, and getting into minor fender benders, but killer blows can't be forced. While I'm sure better players than I will tell you there are ways to increase your chances of putting yourself in good situations, it seems that there's a fair amount of luck involved for even the most lethal drivers.

And unlike the heart-pumping thrill of a quickdraw in a first-person shooter or the adrenaline surge that builds as you fail plays on first and second down in Madden, there's little residual satisfaction in the Destruction AllStars' in-between moments. A chase that ends in a partial hit feels like a disappointment, rather than a minor success. The more time and energy you invest in a crash, the more you want the points and, more importantly, the satisfying sensation of crushing your opponent to bits. Even if you score and they don't, it doesn't feel like a win unless the car's been smashed to smithereens.

You occasionally have the ability to make an opportunity for yourself using your characters' unique car and abilities, called "breakers." Charged by crashing or finding power-ups on foot, the hero cars and their skills add some much-needed depth and variety to your quest for car crashes. Each of the breakers, which include powerful speakers that hit nearby enemies, a giant blade on your hood that instantly slices through any car you ram, and good ol' invisibility, give you an advantage to build a strategy around and, in some cases, an extra way to hit cars. The downside to the hero cars is that they're fleeting; they crash just like any other and there's no guarantee that you'll get to use your car's ability once you jump in. Each character also has an on-foot breaker, but… well, they aren't as entertaining or effective as the ones you use in your hero car.

Very few things are as interesting when you're on foot. Jumping in and out of cars is Destruction AllStars' most novel idea, but that only serves to impede the car combat gameplay. Aside from bailing to avoid death (and minimizing the number of points your opponent can get for wrecking your car), you can jump on an opponent's car and try to steal it by pressing a series of prompts before you get shaken off. Each level has a series of platforms only accessible on foot, which have power-ups that charge your special abilities.

Here's the problem: Every second that you're on foot is a second you aren't crashing a car, which is the one thing you really want to do in this game. Stealing cars requires extremely precise timing and isn't as useful as the tutorial makes it out to be. The platforming relies on some very finicky parkour mechanics that make all but the most straightforward platforming trickier than it needs to be. In the first week since launch, some players seem to have figured out strategies for earning points by tricking players into crashing into traps, but for the most part, you do not want to spend any more time outside of a car than you need to. Moreover, forcing players out of their cars becomes a huge hurdle for new players (or slower-learning players, since everyone's new at launch), who spend less time in cars because they crash more often, which makes it harder for them to learn strategies and improve.

The on-foot gameplay plays a large role in Destruction AllStars' true problem: It feels like there's a lot of downtime. Even though there's always a new car to find or an enemy to chase, there's only one thing that's really worth doing--crashing--which takes a lot of setup for a short-lived reward. Even with great looks and solid controls, you spend too much time spinning your wheels.

View Comments (32)
Back To Top
5
Mediocre
About GameSpot Reviews 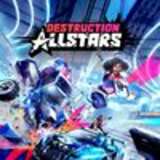 After playing Destruction AllStars for about 10 hours, Mike Epstein still isn't sure what kind of weapons his hero car would have. He is certain, however, that it would have a Diet Coke dispenser.