Sensible puzzles and an adventurous story make Destination: Treasure Island a treat for all ages.

Logical adventure games don't come along very often, so the arrival of Kheops Studio's Destination: Treasure Island is cause for celebration. This sequel to Robert Louis Stevenson's classic pirate novel is long on common sense and short on the unreasonable puzzles that force so many fans of this genre to turn to online walkthroughs. Such a straightforward focus gives the game the atmosphere of a lighthearted swashbuckling quest, not the journey into frustration that adventures frequently devolve into after the first hour or two of play.

The plot picks up five years after the events recounted in Stevenson's novel. As the action opens, Jim Hawkins is now running a shipping business in the Caribbean and reminiscing a bit about his old pal Long John Silver. However, before he can wax too nostalgic, he's locked in his cabin by three of the mutinous rogues he encountered way back when, which forces him to make a quick escape that lands him marooned on Emerald Isle. The storyline is a bit poorly developed at this point, but the island turns out to apparently be the new stomping grounds of Silver. Old Long John has set up an elaborate treasure hunt for Jim, with the assistance of his parrot and a rhyming riddle that gives hints on how to unlock the island's many secrets.

It's this lengthy piratical doggerel that makes Destination: Treasure Island such a pleasure. The rhyming couplets provide just enough clues to ensure that you generally won't get too frustrated. For example, at one point you're stuck with a locked gate and given only the lines "But are you lost and running blind?/Well, friend, if you've got a black spot/Look at it and you will find." Nobody's going to win any prizes for the quality of this verse, but these lines pretty clearly tell you that the solution to opening the gate can be found by looking closely at the infamous black spot that the mutinous sailors presented to Silver in the original novel. Sure enough, an examination of the spot reveals the code needed to unlock the door and journey to the second section of the island. Likewise, you progress through the poem by section, with the game crossing off lines whenever you solve the riddles that they present. This further prevents you from getting lost or frustrated, given that you're pretty much always working on just a single problem at a time. It also makes the game friendlier to younger players, who might not be able to keep track of the various puzzle and plot threads that fill up the typical adventure game.

About the only drawback here is the similarity between the different puzzles. Most involve picking up and combining various objects, so there is something of a pixel hunt going on here. Nevertheless, all important items are easy to spot, which means that you don't have to scour every square inch of every screen. As long as you pan the first-person viewing perspective all around each location, it's tough to miss key items and trigger points important to solving the game's various conundrums. Still, there are only a few logic puzzles in the game, and most of these are readily solvable by simply reading Silver's poem and experimenting with the items in your inventory. Occasionally you'll engage in some basic memorization, as with one memorable moment when you sing a duet of "Yo-Ho-Ho and a Bottle of Rum" with Silver's parrot. Real uniqueness is added only with knot-tying challenges, where you pick from two choices to tie the requested nautical knot, and these are so simplistic that they're more annoying than enjoyable.

The look and sound of the game are somewhat dated, although not so behind the times as to be a bother. It is based on the old first-person style popularized by Myst, so play can feel a bit clunky on occasion. Despite this, you never feel limited by such static movement and the ability to spin in place and check out your environments. Many of the tropical scenes are quite picturesque, which also makes the game appear more modern than the engine that powers everything. Audio is highlighted by some great voice work from the actor playing Jim. He perfectly balances the characterization between the teen of the original story and the young businessman and sailor that Jim has grown into here. Unfortunately, the music is a bit of a letdown, as it doesn't feature any of the jaunty pirate tunes that you would expect from a game like this.

Sensible and fun, Destination: Treasure Island is a must for anyone who likes a good pirate yarn. There isn't anything here that's particularly innovative, although traditional adventures are rarely this rational and enjoyable. 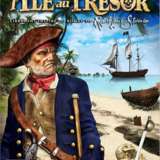 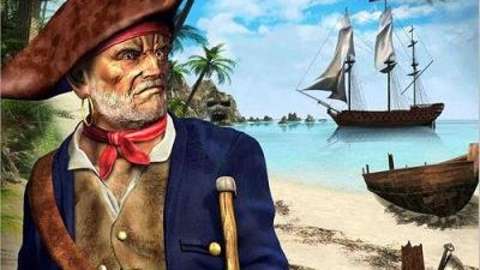 Destination: Treasure Island sends you to Emerald Island in search of a marvelous treasure, while avoiding pirates and old enemies of Long John.