Derek Jeter Pro Baseball is so far beyond its competition as to render it largely irrelevant.

Given the preponderance of baseball games on carrier download decks, especially in these summer months, it might surprise you to hear that Gameloft's Derek Jeter Pro Baseball 2005 has no real competition. The simple reason is that whatever you might think of Derek Jeter the man, his wireless digitization is heavenly. In almost every conceivable way, this game is superior to its competition. Indeed, it is in a different ballpark entirely--one with plush seating and hot dogs fortified with nutritious vitamins and minerals. Although it lacks the MLBPAA license, this is the baseball game you want to play on mobile.

Previous mobile baseball games have been impressionistic at best. They've tended to focus on specific aspects of play, usually the batter-pitcher confrontation, glossing over the rest. Gameloft has instead taken a holistic approach, providing useful innovations in batting, baserunning, and fielding. The most immediately noticeable of these is the batting system, which gives you six ways to hit the ball.

This batting solution is an expansion of previously existing systems, which offered maybe two or three types of hits. The 2, 4, 5, 6, and 8 buttons correspond to locations in your batting zone. When a pitch is forthcoming, you'll have to press the right button at the right moment. If you under- or over-cut a ball, it will affect the fate of that hit. For example, if a pitch is thrown high, but you press the 5 key instead of the 2, you'll likely hit a pop fly that will be easily caught by an outfielder. Of course, you can also bunt.

Derek Jeter's pitching system takes a page out of CBS SportsLine Baseball, in which you select a pitch, then simply choose where you want it thrown. By throwing sliders or curveballs on the edge of a strike zone, you can fake out batters pretty effectively. The game's impressive AI will thwart your efforts much of the time, however, particularly on the higher difficulty levels.

Baserunning is a part of baseball that has hitherto been mostly automated on mobile. Derek Jeter fleshes out this aspect of the game, allowing you to tell any of your base runners to steal at any time. When you're in the field, a part of your heads-up display lets you know when the CPU is attempting to pull one over on you. A quick button press will stop that runner cold. What's more, pickle situations sometimes arise, in which a ball is tossed between two basemen, and a runner is stuck between the base he was attempting to steal and the base at which he formerly resided. As the unfortunate runner, you can attempt to run or dive past your persecutors. Pickles are invariably exciting, and it's great to see them included for the first time in a mobile game.

Derek Jeter gives you more control over fielding than any other mobile game. It's your responsibility to guide your fielder into place, catch or scoop up the ball, and throw it toward the desired base. The length of time for which you hold the appropriate button determines the strength of the throw. If you're racing to beat a runner, you'll have to choose between strength and speed. Of course, if you prefer a more casual experience, you can opt to automate much of the fielding.

You can play Derek Jeter in exhibition, season, or playoff modes. In each of these, you can choose your team, manage your lineup, and tweak play settings. In the latter two modes, you can choose to simulate a game based on statistical strengths, rather than play it yourself. Unfortunately, while Pro Baseball includes teams from all 30 of the MLB cities, the teams and players haven't been licensed. The only Yankee you'll recognize is Derek Jeter himself. The rest have been given pseudonyms that will remind you of the days when Michael Jordon was named "Player." Baseball purists now writhing in agony should be aware that the lack of an MLBPAA license is Pro Baseball's only real shortcoming.

The game employs carefully shaded sprites that really add depth to the players and field. In the hands of a less scrupulous publisher, Derek Jeter Pro Baseball might have been branded with the "3D" designation, bringing no shortage of shame to everyone involved. Fortunately, the game doesn't deny its form, and it looks great on the Nokia 6620. The animations are smooth, and the player models are absolutely enormous. The game's single, fictitious park is modern and picturesque and is set in some city whose skyscrapers turn a gorgeous shade of lavender at dusk. Here's the kicker: You can choose to play in the afternoon, in the evening, at night, or in real time. This last mode bases its atmospheric ambience on the actual time of day and will change along with the outside world. It's safe to say that Derek Jeter's visuals trump those of any other mobile baseball game on the market.

The sound is even more phenomenal. Whereas most games include a hitting sound effect and call it a day, Derek Jeter Pro Baseball boasts a half-dozen familiar baseball tunes, as well as great sound effects and vocal clips. You'll hear classics from the Gameloft park's organist, as well as some more modern tunes, such as the infectious "Zombie Nation," over the PA. An umpire will yell things like "Steeerike!" and "Safe!" at the appropriate junctures. Most mobile games can't be bothered to include both sound effects and music. Derek Jeter Pro Baseball features tons of both, and its audio is therefore some of the best you can find in any Series 60 game. Furthermore, you can adjust the volume levels of both sound and music by intervals, meaning you won't embarrass yourself on the subway. Series 60 games are notorious for their unbearably loud volumes, so this is excellent news.

If you're looking for a baseball game on your phone and aren't dead set on seeing accurate player names, you're set. There isn't any one feature that propels this game above the pack, but there's an overall feeling of excellence that's present in every layer of the game's design. This isn't a piece of baseball adverware; it's a full-featured game capable of sustaining your interest over the long haul. 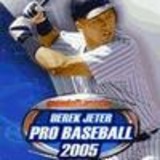