There are plenty of dungeon-crawling-focused role-playing games out there, but given the substantial time investment they require, first impressions can drive you away before the game has a chance to put its best foot forward. In the case of Demon Gaze, bear in mind that first glances can be deceiving. It may appear like another forgettable Wizardry-inspired import featuring overtly sexed-up still images, but behind those initially off-putting images lies a robust, well-made adventure with a lot of depth.

You begin Demon Gaze by waking up in the bottom of a dungeon. You have no idea why you are here, but you hear strange, childlike laughter off in the distance. As you try to escape your surroundings, you encounter a battle-scarred warrior woman. She gives you a weapon and tells you to face the source of the voice--a vicious, bloodthirsty demon. It's in this battle that your initial abilities are revealed: you have the gifts of a gazer, an individual capable of subduing and controlling demons.

Soon, you discover more about your odd situation. You've signed a contract to board at the Dragon Princess Inn, an unusual safe haven in a dangerous region. The local mercenaries make their living doing menial jobs in the hazardous ruins, but Fran, the inn's manager, has a different job for you: to capture all of the demons wreaking havoc in the surrounding lands. A complicated task becomes even more wrought with drama as the secrets of your lineage, Fran's ambiguous motives and strange behavior, and the actions of the unusual characters that inhabit the inn intertwine. Each character has his or her own reasons for being at the Dragon Princess Inn, but ultimately, it is Fran's guidance that binds the cast together. Unfortunately, as part of the story, Fran sometimes gives you mundane tasks you must do before you can proceed into new areas, and during these times, the narrative slows to a patience-trying crawl.

Demon Gaze's blatant pandering may also test your patience. Scantily dressed non-player characters like Lancelorna and Prometh, along with cutscenes showing a nearly naked Fran, make it clear that the game seeks to titillate. That pandering can be difficult to stomach (Did we really need to see Fran's maid secretly sniffing her panties?), but the baring of skin isn't limited to the female characters; there are suggestively dressed and more modest character creation art choices for guys and ladies, and one of the more frequent skin-baring characters is Lezarem, the item shop's handsome elf proprietor. Even so, I was surprised at how much I came to like a lot of these characters despite behavior I found initially off-putting.

A complicated task becomes even more wrought with drama as the secrets of your lineage, Fran's ambiguous motives and strange behavior, and the actions of the unusual characters that inhabit the inn intertwine.

The story may twist and turn, but Demon Gaze's mechanics are straightforward, at least initially. It's a turn-based, first-person RPG heavily inspired by old-fashioned PC games. The Dragon Princess Inn acts as the game's hub, where you can buy items and weapons, take quests, and rent rooms for up to four additional party members. The art representing the characters is well drawn, distinct, and colorful, though it's obvious that multiple artists worked on the images, leading to an inconsistent overall look. Once you take your first steps into one of the two starting dungeons, however, you begin to see some of Demon Gaze's more interesting nuances. The 3D visuals don't look that great, but map layouts are terrific, filled with all sorts of devious tricks: hidden passages and traps, tiles that randomly spin you around, one-way passages, and the like. An automap fills as you explore, though unlike in the similarly Wizardry-influenced Etrian Odyssey series, you can't use the touchscreen to draw boundaries or place your own icons on the map.

What you can do is write and read gazer memos strewn about the dungeons. These function similarly to messages in the Souls games: anyone playing Demon Gaze can write a memo using preprogrammed phrases, where it appears in other players' games at that spot. These can be used to share locations of hidden doors and treasures, give directions, warn of impending dangers, or just convey idle chatter, making the exploration experience feel more communal.

Another noteworthy presence in the dungeons of Demon Gaze is the circles. Circles serve a variety of purposes and are key to your success. Their first role is as checkpoints, and you must take control of every circle in a dungeon before you can fight that dungeon's demon in its final form. They also act as points where you can save and swap out the demon keys you've earned. What you mostly use them for, though, is collecting loot. By setting gems corresponding to different item types on the circle, you initiate a battle with monsters that are guaranteed to drop the items you specified. This makes the process of loot hunting considerably easier and much more fun, since you always know what you're getting out of combat. Need some light armor for your wizard? Set a bunch of light armor gems on circles around the dungeon and see what you get. Of course, the quality of the goods isn't always guaranteed, but there's plenty you can do with even subpar loot: you can sell it, sacrifice it to power up your higher-quality gear, or, given that the circles are save points, reload your progress and try your luck again.

Combat also presents some unique twists. The boss demons you have defeated are transformed into keys, and the gazer character has a special command menu to release demons during fights. Demons have their own health, loyalty levels, and skill sets, and behave according to their own whims. While demons don't have magic points, being in battle uses up stored energy from a demon gauge. (You can also command the demons to perform specific actions--even when not on-field--at a significant gauge cost.) If the gauge runs dry, the demons transform and run wild, attacking both friend and foe indiscriminately for massive damage, so keeping tabs on how you use them is crucial. Their presence adds an interesting dimension to both combat and exploration; demons you bring with you can also grant passive field bonuses, such as revealing hidden doors or preventing health loss on floors that damage you.

Need some light armor for your wizard? Set a bunch of light armor gems on circles around the dungeon and see what you get.

But even with demonic forces on your side, combat can get pretty tough. Key to your survival is the use of your team's special skills. These are acquired through gaining levels, and most skills are learned based on the character's class. However, rare artifact items come imbued with their own skills. You can equip these on a character who can make use of the artifact's skill regardless of their class. This can be used to create otherwise impossible skill combinations--for example, giving a damage-shield creation ability to a fighter--or to grant abilities to characters much earlier than they would be naturally learned. Using artifact skills in tandem with innate character skills opens up a plethora of interesting strategies, though it's hampered by the relative rarity and costliness of gems needed to obtain artifacts.

The ease of loot collecting and gear enhancing combined with entertaining combat makes exploration in Demon Gaze enjoyable. Things are a bit tough initially--and a very dry translation on the game's assorted help screens doesn't work in the game's favor--but after a bit of dungeon crawling and party building, Demon Gaze settles into a nice difficulty level that is challenging but rarely feels unfair. Yes, you'll probably lose the first time you fight certain bosses, but carefully looking at what went wrong and reevaluating your approach gets you results. And if that still doesn't work, there's an option to alter the game's difficulty level whenever you want.

Demon Gaze is not a game for those looking for fast, easy rewards; you need a great deal of patience to find success, and sometimes it feels like the game's narrative is actively working against your desire to progress to new places. But when you are narrowly clutching victory from the jaws of defeat, laying waste to a challenging foe through party synergy and clever planning, or finding an incredibly rare piece of loot that completely changes how you use a party member, you feel like your efforts have yielded delicious fruit. 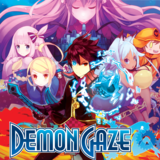 Heidi honestly didn't expect much from Demon Gaze, and was pleasantly surprised to find out that it's a good Vita RPG. Strangely, the game doesn't have an internal timekeeper, but she played the game frequently for about two straight weeks to review it. Also, she assures us that all of the gazer memos she left you folks are totally helpful and not trolling at all. Hmm...