This gory and gruesome shooter improves upon its predecessor in almost every way.

It's not very often that you'll come across a DS game that isn't afraid to splash the screen with gore and dismemberment. While buckets of blood alone aren't guaranteed to result in a great and creepy game, 2007's Dementium: The Ward made a strong case for taking a trip to the dark side on the handheld. Venturing through the grim, oppressive hallways of an atrocity-infested mental institution with a cheap flashlight and an arsenal of deadly implements was an eerie and entertaining experience. The original was an ambitious first-person survival horror game done mostly right, but a few design issues--chief among them a poorly implemented save system and repetitive level structure--bogged down the short, grisly adventure. Dementium II tightens up the gameplay, fixes a lot of the frustrating elements that hampered the first game, and brings the horror-infused action to some interesting new locations.

Though it directly picks up the storyline from the first game, Dementium II is designed to work well as a stand-alone adventure. As a mental patient named William Redmoor who's just awakened from brain surgery, you're transferred to the dubiously named Bright Dawn Treatment Center for phase two of your mysterious and unorthodox "treatment." The center is actually a high-security prison for the criminally insane, and the good doctor there seems to have sampled some of the crazy sauce himself. Your treatment prognosis doesn't look so good, especially when you start warping in and out of a hellish alternate dimension filled with bodies hanging on meat hooks. With your insanity still intact, you just go with the flow, grab whatever you can, and start slaughtering the freaky demonic creatures that pop up out of nowhere while trying to escape to freedom. The story progresses through sporadic cutscenes and miscellaneous documents you find littered around. Aside from a few weird twists about resurrecting some dark demon god, as well as various references to the events and characters in the previous game, it's mostly straightforward. Suffice to say that there are lots of nasty undead beasts around that need a good killing.

The gameplay picks up with moderately paced exploration in some cool new settings, lots of combat with creepy crawlies, and a little light puzzle work. Dementium II runs as smooth as butter, making the task of sending evil minions back to their graves in itty-bitty pieces a pleasure. The mouse-look style controls are fast and responsive. You use the D pad for movement, the stylus to look/aim in 360 degrees, and the L trigger to use weapons. Crouching and jumping features have also been added this time around. Double tapping the D pad in any direction to run is still a little awkward during a few frantic boss battles where you really need the extra speed in a hurry, but everything else works fluidly. The most useful tweak to the interface is the addition of a constant area map located on the touch screen, which fills in as you explore different rooms and areas. It shows locked or unlocked doors and nearby save points, and generally provides a handy quick reference guide to your location. Speaking of which, the new save system is also much more functional. You can log your progress at key points located at regular intervals, allowing you to immediately continue where you last saved rather than start over at the beginning of the chapter when you die.

As impressive as the blood-strewn hallways of the first game were, everything started to look and feel similar after the first hour or so. Dementium II avoids that pitfall by frequently changing up the scenery. Starting out in the prison compound packed with cells and bodies, you eventually venture through other distinct settings. These include mazelike ducts filled with steam and piping, churches with sacrificial altars, a snow-covered townscape with cabins to explore, underground mining tunnels, cemetery catacombs, icy riverbanks, and more. Most settings are plastered with unnerving and disturbing accoutrements. Shredded bodies, trails of gore, piles of meat and internal organs, and other gruesome sights set a chilling tone. Every so often, you also warp between the real world and a twisted Hellraiser-style alternate reality that amplifies the horror factor. For example, you run into a rotting human carcass thrown on a slab with chains being pulled through its mouth and splayed open stomach as it writhes slowly. And that's only in the first few minutes of the game.

Showcasing some excellent visual designs, the wide and varied locations you roam through make the game a much more compelling adventure. You'll actually want to push onward to see where you wind up and what freaky stuff you encounter next. Both the environments and creatures exhibit a greater level of detail. While the 3D audio was a nice touch in the original, it's not quite as exciting this time around. Every time you enter a room with vile creatures waiting to carve up your flesh, the audio switches over to grating, campy horror music that gives them away, stealing much of their spooky thunder. Dementium II isn't outright scary as much as it's pleasantly gory and gruesome. If you play in a dark room with headphones on, then expect to get sweaty palms.

The generally functional yet unexciting medley of typical weaponry like the police baton, pistol, machine gun, and sniper rifle from the first game have been replaced with an arsenal of more interesting and satisfying equipment. Aside from a few basic carryovers, you wield fun but straightforward items like a prison shank, sledgehammer, and assault rifle. You also have weirder stuff like a DIY flamethrower, a mystical boomerang thing, and a nail gun. Smaller weapons can be wielded at the same time as your flashlight to provide illumination and killing prowess, which is something that was lacking in the original. Some intriguing and downright bizarre new monsters round out the bestiary next to returning veteran creatures like the screeching maggots and chest-maw zombies. These snarling adversaries make great fodder for your weapons, though it's the game's clever boss battles that introduce the mightiest (and nastiest) encounters.

Beyond a few lock combination tasks, puzzles mainly amount to hunting down the right key items needed to open up a specific door leading to different areas. It's the exploration and creature-slaying action set in a slew of grim, atmospheric settings that keep you eager to push onward to hunt down unspeakable horrors. Unfortunately, Dementium II burns brightly but then fizzles out a little too soon. The campaign only last about five to six hours, and there's pretty much zero replay value. You can unlock a challenging Survival mode that lets you battle against waves of creatures in arena-style encounters, which is a cool extra feature that gives you more opportunities to use the strange weapons you've unlocked in the main game. Even with its short length, there are a lot of thrills packed in to Dementium II. 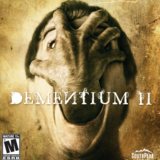 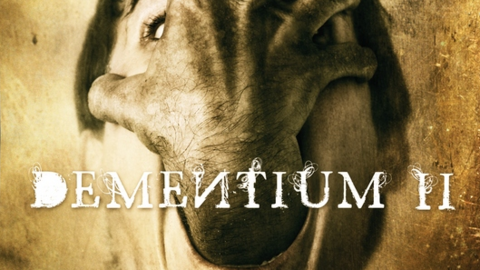 Horror returns to the Nintendo DS in Dementium II.